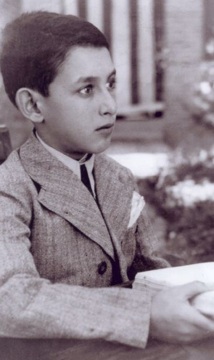 My uncle, Homayoun Sanati recently passed away creating a void for many of us. There have been numerous articles written about him (please see sample links below) and his impact on Iran but non written from a perspective of a family member.

It had been many years since I had seen my Uncle Homayoun, with the difference that this time Auntie Shahin was gone. Tragically, his wife of 50+ years had died in a car crash. So when I opened the door to greet him, he simply fell into my arms and wept. This was a different man – someone who was far quicker to show his vulnerabilities, but even stronger than before because he didn’t waste time controlling impressions.

Spending time with Dai Homayoun was nothing short of a pilgrimage for me. So many stories to share, so many new ways to look at everything… He had the habit of stroking his hair back and taking a deep breath with his lips slightly parted, making a slight hissing sound. Often he would start with “sarkar ellieh khanoom-e Zahra” (showing me the utmost respect by addressing me formally) and then depending on the subject a slight verbal jab would follow, something just enough to de-center me and result in a millisecond of feeling defensive, and then provide a brand new mindscape with ample room for fresh perspectives to emerge. What Dai Homayoun was about to say was unpredictable, but it consistently left me with a treasure trove of thoughts.

This visit was no exception. I handed him a small lavender-scented candle in a tin can. He took it and held it in his soft and gentle hands.

I told him that perhaps this candle could be used as a prototype and he might consider creating rose-scented candles through Zahra Rosewater Company (www.zahrarosewaterco.com — this was a company he founded in 1978 with Khal-e Shahin in Lalezar, Kerman, where the two of them convinced opium farmers to plant Damask Roses, now supplying 5% of the world’s premium organic rosewater). For a moment Dai Homayoun sat quietly pressing the tin can in his right palm and he proceeded to take a deep breath, saying, “I must tell you a story.”

“Years and years ago, I was invited to a gathering in Kerman. I had no interest in attending this event but at the last minute I decided to go. The gathering was full and as is our custom I said hello and shook hands with all the guests until I reached the elders sitting at the head of the room. Still thinking that perhaps it was a mistake to have accepted the invitation, I was introduced to the guest of honor. ‘You are Mr. Sanati?’ he asked in his thick Kermani accent. ‘Yes, sir,’ I confirmed. ‘The grandson of Haj Akbar-e Kar?’ ‘Yes,’ I replied. I had barely uttered my reply before he threw his arms around me. Not expecting his response, I held him close wondering what brought on this old man’s highly emotional reaction. After a short while, he asked me to sit next to him and he began to tell me his tale:

“‘I shadowed your grandfather for a couple of weeks and decided on the day that I was going to knife him. On that day he was dressed in a light-colored suit and with a bowl of yogurt in his hand, he was on his way home. I drew close and threw red ink at him. He slipped and fell on the ground. The red ink and yogurt covered him from head to toe. Without looking at me, he straightened his suit, collected the pieces of the broken bowl of yogurt and continued on. I was left helpless. How was I to stab this man when he wouldn’t respond to my provocation?

“‘A week passed and I was completely perplexed by your grandfather. And then there was a knock on my door. It was Haj Akbar-e Kar. He asked if he could enter my house. Looking directly at me he said, “I have been thinking about you.” He added, “I know your intention and I have spent the last week trying to figure something out.” I was so shocked by his visit that I could barely respond. He continued, “By trade you make candles, but your candles don’t smell good and don’t sell well, so I imagine that’s why you were willing to take money for …” He didn’t finish his sentence. Taking a deep breath, he said, “So I went home and started exploring how you can improve your candles, and I found the solution. I have come here to teach you what I have learned.”

“And with that sentence the old man looked at me, ‘Can you imagine how your grandfather’s visit that day changed my life? I will remain indebted to him always.’”

Dai Homayoun, still holding the container of the scented candle I had brought him, finished his story. I remain impacted by this story about the man that Dai Homayoun fondly referred to as Baba Haji. I am in awe of my great grandfather who chose to find a way to help the candle maker, his would-be assassin, rather than think vendetta and feel targeted. And now that Dai Homayoun has passed away, I will continue to carry his gift with me. I could choose to be devastated by the fact that I won’t hear his deep breath and slight hissing sound again as he inevitably opened the world of possibilities for me … or know firmly that all I need to do is to adjust the angle and allow enough room for fresh perspectives to emerge.