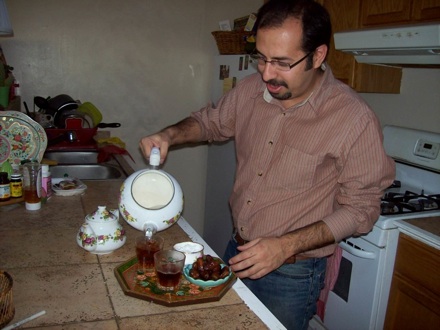 In late August, I went to visit Tahmoures Pournazeri at his residence in Berkeley [see photos]. He was eagerly expecting the arrival of his family, due to arrive from Tehran the following week, so that they could start their new US tour. Tahmoures belongs to a family of extraordinary musical artists. His mother is a singer and his father, Keikhosrow Pournazeri, founder of Shams Ensemble is credited with reviving the ancient Iranian instrument, Tanbour, and helping it find its rightful and prominent place among contemporary Persian instruments. The instrument was previously only used in religious ceremonies until 1980 when Mr. Pournazeri introduced it in his album Sedaye Sokhane Eshgh. He has also played a pivotal role in introducing Daf in ensemble Persian music. Mere teenagers, Tahmours and later Sohrab Pournazeri brought new ideas to Shams Ensemble’s compositions, making the group into one of the most popular traditional Persian music groups in the world.

Over sweets and tea which the young master personally served, he talked passionately about their upcoming tour. He said: “This new concert will have two parts, tanbour navazi, and something we have never done before. Its musical message is a very patriotic message. We decided to do a patriotic musical presentation in the second part. We call it Azadi (Freedom) or For Iran, baraye Iran. All the poems, except for one are from Ferdowsi, the rest are from contemporary poets, Fereidoon Moshiri, Mohammad Reza Shafie Kadkani, abd Hossein Monzavi.”

I asked him about collaboration with other artists. He said they started this 12 years ago, when they were doing a Kurdish album, sivi sur (sib-e sorkh) with the Kamkars. They have worked with a French Jazz band in Iran. Tahmoures has worked with an Indian Qaval band and the Ukranian Philharmonic Orchestra. This work was partly published in penhan cho del album, and the other part has not been published yet. They have started recording a piece of work with Shahdad Rohani with The Slovak Radio Orchestra. In July Tahmoures did a piece with Joan Baez (we shall overcome) for United for Iran.

I saw them onstage in concert at the Herbst Theatre in San Francisco last year. It was a fantastic concert. It wasn’t the first time I had seen them perform live. I saw the Shams Ensemble in San Francisco for the first time in early ‘90’s, when they were touring with Keikhosrow’s cousin, Shahram Nazeri. They were performing songs from Shahram Nazeri’s Heyraani album.

Last year’s performance was very special, complete with whirling dervishes and a most interesting selection of poems and especially percussions.

About this Tahmoures says: “The musicians’ energy level sets the audience energy levels. Music is something that comes from the heart. The audience will match what your heart sends out.”

Well then, they must have put out some fabulous vibes from their hearts in their previous concerts, for all I can remember is that to go to a Shams Ensemble concert is to be surrounded by pure joy and excitement! Don’t miss their concerts if you can. [see photos]