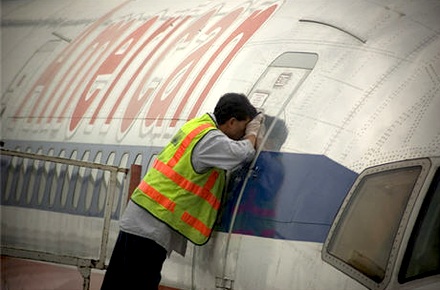 I was getting on a flight to start my vacation.  When I approached my seat, a nice Texan lady in the seat next to mine started eyeing me with a bit of suspicion.

“What’s wrong with you?”  She asked with obvious concern.

“Whatever do you mean?”

“Your hair is all… dark and ethnic. Your eyes are so… not blue… so demonic. You look so… unlike us. Oh my god! I’m scared.”

Before I could react she began screaming frantically: “Marshal! Air marshal!”

A mean-looking large man and a tiny one trying to look mean by chewing a toothpick jumped out of their seats, pulled out their Tasers, approached and assumed shooting postures. “Don’t move, scumbag,” yelled the large one.

“Don’t tase me, bro!” I yelled fully realizing that history shows the odds are never in favor of the Middle Easterner in cases like this.

“Shut up, boy!”  Bif turned to the screaming lady. “You, nice American lady from Texas, is this ethnic looking monster making you uneasy?  Because if he is it’s his fault, not yours, for looking different.”

“Yes,” she said. “Akmed over here was being Middle Eastern with me, violating my right not to pollute my vision with the dark sight of him. I was so scared, Marshal!”

“There, there.  Your being scared based on your prejudice perfectly justifies us making life miserable for his kind because 9/11 changed everything.”

“What about my rights?” I inquired.

“Quiet! You have no right to have rights.  9/11 changed everything.”

“Since when is looking different a crime?” I asked with just a bit of anger showing.

“I said quiet! We ask the questions here because 9/11 changed everything.  In this post 9/11 world we have a zero tolerance policy for people like you, acting all uppity, asking us questions with just a bit of anger showing, feeling entitled to have rights.  Your righteous indignation makes me sick.”

“That’s right,” the tiny guy repeated, “You make Bif sick.  Should I get you the barf bag, Bif?”

The big guy stared down the little guy and then continued. “Moving right along…  Where were we?  Are you now or have you ever been an Iranian?”

“Yes, as a matter of fact I was Iranian a little bit in the airport food court when I smelled something intoxicating which I mistakenly thought was cholokabob.  But I’m feeling much better now.”

“Aha!  I knew it!  I know Iranians are not Arabs but I’m going to insult you just the same.  We don’t mind your women so much because they’re stylish and look fine, but your men we must abuse because it makes us feel superior.  Eugene, looks like we got ourselves a big fish, an Iranian.”

“So you like fried fish,” I said.  “It sure beats eating road kill all the time.”

That did not go over too well with Bif.  “Are you ridiculing my background, boy?  That does it.  Take off your shoes, you sumbitch.  That’ll prove you’re a terrist.”

I showed the marshals my bare feet. “I’m way ahead of you, Biffy.  I no longer wear shoes when I travel so you people don’t soil your diapers at the sight of a shoe-wearing Middle-Easterner.  I’m thinking about taking off my clothes also during flights.  All that remains to be decided is the eternal question of boxers or briefs.”

“What’s in your carry on?” He ripped the carry on out of my hand without waiting for permission.  “Oh lookie here!  What is this?  Just the evidence I was looking for!  A bag full of suspicious looking pellets.”

I shrugged off their discovery.  “Those would be what they call ‘pistachio’ nuts. Can you say it, Bif?  Pis-ta-chios.”

“These are more likely small explosive devices that you are taking to your sleeper cell.”

“Nah.  They’re just pistachios… Although, they do explode in your mouth with unbelievable taste.”

“So you do admit they are improvised tongue-side explosive devices.  I’m going to have to confiscate them as evidence, because 9/11 changed everything. ”

The tiny guy perked up again: “That’s right, Bif! We got him now, didn’t we Bif?”

Bif gave the tiny one another impatient look and then continued with me.  “I still think you are a con artist.”

“I’m not from Qazvin if that’s what you mean by con artist.  But I resent your offending my Qazvini friends.  I would never turn my back on them.”

“Where were you going, wise guy, Tora Bora?”

“Are you mocking me?  Because that’s not going to help prove you’re not a terrist, Akmed.”

“Look, I know in this post-9/11 world innocent until proven guilty went out the window along with peace, harmony and good music. I can endure demeaning questions, accusatory looks and condescending remarks.  I can tolerate walking through the airport with my shoes in my hand, my belt on shoulder, my pants falling off, while I drag my luggage through miles of airport lines listening to officers in weird accents issue contradictory gibberish.  I can put up with risking cavity searches every time I take a vacation. I can even live with being presumed a terrorist until I prove you an errorist.  But must you use a most unimaginative derogatory name such as ‘Akmed’ to refer to all of us?  Can’t you think of one good offensive name that can at least be mildly amusing?  Whatever happened to all those affectionately insulting slurs like sand nigger, raghead, camel jockey, shag face, wooly habbibi, towel head, falafel waffle, hucka-lucka, roach rancher, desert monkey, dune coon, burka Sherpa and carpet pilot? How about spicing up your cliché zingers with a bit of humor such as ‘have you ever blown yourself up’ and ‘if so would you do it again? No answer?  Then go back to your aisle seats, drink your mini bottles of liquor, and open your tiny bags of peanuts hoping to find two peanuts in there instead of one.  And Bif, don’t forget to take your whiney Neanderthal with you.  He is really getting on my nerves.”

Bif and Eugene, who were prepared for explosive devices but not explosive words, started backing away.  The puny marshal objected: “But, Bif, what about 9/11?   9/11 changed everything, didn’t it, Bif?”

“Ah, shut up, Eugene.  We got his pistachios.  That should be punishment enough for Akmed.”