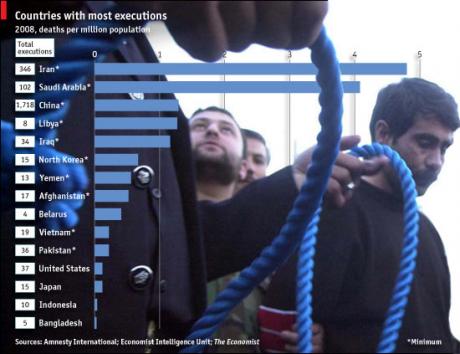 Today, October 10th, is the World Day Against the Death Penalty. Morbidly ironic,

Behnoud Shojaee’s execution on this day is a stark reminder of the brutality of Islamic Republic of Iran’s policies in executing its citizens on a whole host of criminal and belief-based charges.

The judicial system in Iran has proven time and again to be unfair, discriminatory, and perversely criminal itself in dealing with social maladies inflicted upon its own society through implementation of barbaric laws.

It is one thing to hear an ideological regime insist upon its right to take away lives in retribution for crimes (Qisas).  It is entirely another to hear educated men and women defend the death penalty as a deterrent to crime.  The death penalty is not and has never served as a real deterrent to major crimes.  Its very existence on any country’s list of punishments for individuals has given that country unlimited and unchallenged authority over its citizens’ lives.

Iranian judicial system is devoid of any justice at all.  Inadequate and ambiguous laws, open to interpretation by mostly illiterate and inexperienced judges, barbaric ideological princples governing those laws, and rampant corruption within the Iranian judiciary are only some of the reasons why nobody’s life and death should be entrusted in the hands of a court within IRI’s justice system.

In the 21st Century, it is a crying shame to see people still defending capital punishment as just punishment for major crimes.  To believe in ending lives means a lack of belief in a society’s power to rehabilitate its delinquent citizens.  It means the government is shrugging off the responsibilities of crime prevention and maintenance of peace, and its responsibilities to see offenders through rehabilitation.  In cases where an offender is deemed unable to rehabilitate, such as in the case of mentally ill criminals, murdering them is hardly the remedy.  Ill people must receive psychiatric help and treatment not death.

Behnoud and Delara’s executions this year should serve as a reminder to all the people who approve of the death penalty that in the hands of an ideological rule, young offenders who might have had a very good chance of rehabilitation and re-joining the society were deprived of that right and the society was further deprived of services and talents of those young people.  Countless political prisoners and prisoners of conscience have been and will continue to be executed in Iran, without due process, without access to legal representation, without assurance that their trial judges are fair and trained professionals, and with leaving the fate of the prisoners in the hands of the victim’s family.

Retribution breeds hate and revenge.  How can a judicial system render fair and balanced treatment of its citizens when revenge and hate are the determining factors on whether a prisoner lives or dies?  The barbaric and savage Qisas laws must be abolished in Iran and the death penalty must once and for all be abolished worldwide.  Capital punishment is nothing but state-sponsored murder.