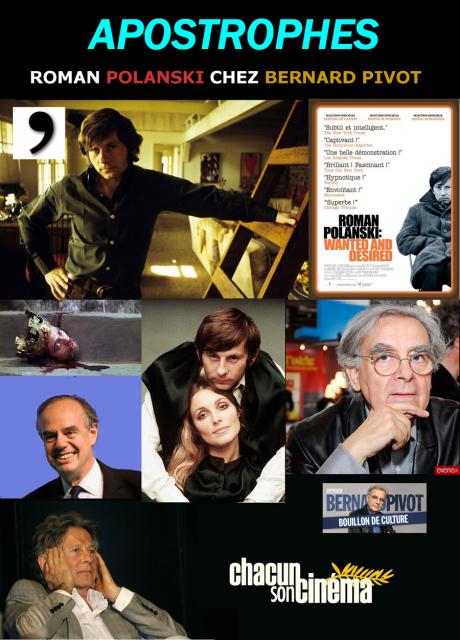 Polish Director and French Citizen Roman Polanski has been caught by his past once again. The former kid of the Warsaw Ghetto turned into one of the most Iconic and talented filmakers of his generation seems to be equally doomed as the characters which haunted his movies …

The director of such great films as China Town, Tess , Repulsion, Dance with Vampires, Frantic ( Polanski’sTribute to Alfred Hitchcock’s style) , Rosemary’s Baby, The Tragedy of MacBeth ( probably the best screen adaptation of this Shakespeare play ) or the Palme D’Or movie The Pianist ( which I personally hated as a film from a cinematographic point of view ) has always been a controversial filmmaker particularly in America where the Tragic assassination of his wife Sharon Tate in 1969 in Hollywood by a groupe of marginals led by Charles Manson sparked a national outcry and sympathy for the Polish director. Manson was to confess that he had been influenced by Polanski’s movie Rosemary’s Baby released a year earlier. This trauma led him to Europe where as a Catharsis he directed the screen adaptation of Shakespeare’s The Tragedy of MacBeth only to retun once again to Hollywood in 1974 to direct China Town starring Jack Nicholson and Faye Dunnaway. but after his conviction for the statutory rape of a 13-year old girl ( the charges included Oral Sex, Intercourse, drugs abuse and Sodomy on minor), Polanski fled from America to avoid prison.

The US has formally asked Switzerland to extradite film director Roman Polanski on sex charges, Swiss officials say. Polanski has been wanted in the US since he fled the country in 1978, after pleading guilty to having unlawful sex with an under-age girl. He was held in Zurich after travelling from France to collect an award at the city’s film festival in September.

Roman Polanski’s arrest has sparked a great deal of controversy in France which has divided public opinion and criticism towards France’s newly named Minister of Culture Fréderique Mitterand. Marine Le Pen the daughter of Jean Marie Le Pen ( founder of The French Far Right Party Le Front National) vehemently criticized the latter for defending Polanski publically and took the opportunity to embarrass Mitterand by mis-quoting excerpts from his controversial autobiography La Mauvaise Vie in which he had alledgedly admited to have indulged in Sexual Tourism in Asia. True or False the allegations have embarrassed the French government of Nicholas Sarkozy while triggering debate on such controversial issues as “chemical castration” for pedophilia serial criminals, the distinction between Homosexuality and  pedophilia aka sexual abuse on children or the fact that celebrities or powerful politicians are not above the Law …

The scandal also triggers questions on the role and responsability of Artists towards the community. Questions for which in Polanski’s case I truly do not have any definitive answer. Should Roman Polanski be tried for what is after all a crime and that is the sexual abuse of a child be it a “lolita” or “not” ? The Answer in my opinion is Yes, as far as accountability is concerned, I am less certain however about the type of punishment he should be subject too given that if No one’s rights should be ABOVE that of other citizens but neither should they be BELOW those of any other citizen. I am also troubled by the type of public lynching Polanski has been subject too recently by fellow colleagues ( such as Luc Besson) or political personalities who have hypocritically abandoned him to his predicament similar to that reserved to people accused of WitchCraft in the Middle Ages …

But should Roman Polanski pay heavily with a long term sentance like a life imprisonement or chemical castration given that he is neither a serial criminal and is in fact a married man and father of  two young children a daughter and a son who in turn may be traumatized to see this sordid story of a long distant past resurface in their daily lives ? The answer to this question is certainly not an easy one to answer by the Jury, lawyers or prosecuters all the more than the victim of that child abuse, Samantha Geimer is today an adult who claims to have overcome the truama even if she has not entirely forgiven Polanski nor bares any particular hatred towards him after all these years.

So What will ultimately be the Verdict if Polanski indeed is extradited to the United States for ReTrial or imprisonement ?

QUESTION: What is Your Opinion on this dillema and should Polanski pay for his crime and if so in what form ? Should he be Imprisoned, or should it be a symbolic short term imprisonement or should he be freed on bail ? Another issue is that Switzerland known for decades as a financial paradise for many bank investors has not necessarily been particularly scrupulous when it comes to devulging suspicious bank accounts or allowing investigation by Interpole of dubious investments …

In anycase below is nevertheless an interesting interview of Polanski centered on what is of interest to me and that is the filmmaker rather than the private man whose Rights as a citizen should Not be ABOVE those of other citizens NOR should they be BELOW….

Watch him interviewed ( In French) on Bernard Pivot’s famous talk show Apostrophes for the publication of his auto biography.

Part VI: ( Marcello Mastroianni speaks about his films with Fellini)

US asks for Polanski extradition (bbc)