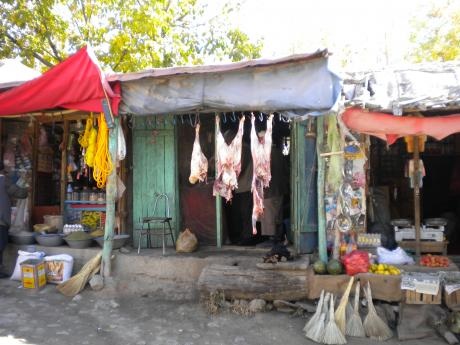 The next morning, a colleague, Sara, and I set out at 7.30 to go to Istalif, a village located about 18 miles northwest of Kabul and known for its handmade glazed potteries. She is a middle aged English woman who teaches at the institute and like myself is an avid walker and hiker. [photo essay]

The plan was that one of the drivers, Rafi, would drop us off in the centre of the village and wait for us there while we went for a day-long walk along the river. The idea was that we would walk along the river to get to a guesthouse about 12 KM away,have a light lunch there and then walk back.

We left the Qala on time and drove through the city to the outer suburbs, passing many makeshift cemeteries along the road. These cemeteries consisted of pieces of various sized rocks and green flags marking the graves. The road was a two-lane street with a relatively even flow of traffic in either direction. After about 25 minutes, the car took a turn to the left into a dirt road. This was the last stretch of our journey to the village, which took us nearly as long as the 15 miles form Kabul.

This dirt road was partly lined with mud walls and farmland, where grapes were spread on pieces of cloth on the land to dry into raisins. Often our car had to stop to make way for flocks of sheep or farmers on donkeys. I kept thinking that in the scenes we saw around us, there was absolutely nothing that suggested we were in the 21st century. In fact, often they reminded me of those 19th century romantic European paintings of majestic landscapes with a single figure dressedin exotic attire.

Here we were only 18miles outside Kabul and often our car and coded letterings spray-painted on mud walls indicating the area has been cleared of mines, were the only signs of contemporary life. I cannot imagine what the truly remote parts of the country look like. I once read in a book that in central parts of Afghanistan, the only global brand is Islam. Nothing I have seen so far makes me doubt that statement.

We arrived in the village at 8.15. Rafi parked the car in a meydan (square) where some boys were washing cars. Although, with his shiny black suit and leather shoes he was not really appropriately dressed for a walk in the countryside, out of politeness I invited him to come along. To my surprise he accepted. When we started walking he turned to the boys and asked them to wash his car.

It was a glorious Autumnal day. The beginning of our walk took us through the village where fruit, vegetable and meat vendors where opening their shops. Old men in their turbans were sitting on roadside makeshift teahouses sipping green tea. They offered us some as we walked past.

Recongnising Rafi and Sara, a number of villagers came out to greet us. As we made our way to the riverbank to start the day’s walk, an middle aged man ran after us. He had heard we were planning to walk to the guesthouse. He was coming to warn us about the distance. He suggested we take horses otherwise it would take us all day. It was a very tempting offer, as I have always wanted to learn horseback riding, but I was not going to begin on the mountainous terrain of Afghanistan. We politely declined.

Ever since my arrival a week before, my appreciation of the natural landscape of this country was that of a majestic arid mountainous environment. This area was very different.This was a relatively green landscape with lots of trees. Some trees along the riverbanks were beginning to change their colours into a tapestry of yellow, orange and red. This was a colourful oasis cutting through the mountains where the murmur of water was a continuous companion. The blue sky cast a crisp light on everything in sight creating deep shadows. Unlike in Kabul, the air here was clear and clean. I was in my element.

Along the way we came across many villagers mostly children. One of our first encounters was with a little boy of around 5. I walked towards him and said hello. I asked him if I could take his picture. He said yes. I took one and then searched in my bag to give him something in return. I only had a Chinese pear and a couple of bottles of water. I pulled out both and asked him which one he wanted. He took the water, probably more interested in the plastic bottle than in its content. I wished we had thought of bringing a box of sweets with us so that we could distribute it amongst the children on our way.

After walking for another 20 minutes, we came across an elementary school. It was their recess time. About 30 little boys were hanging out outside, while the girls remained inside of the schoolyard. I noticed a small kiosk in a corner of the school building and suggested we buy some sweets for the rest of the way. The kiosk only had gums, so we bought a big box.

As we were interacting with the boy in the kiosk, the other boys began to huddle around us. I overheard one saying to the others, ‘They are buying all our gums!’ I turned around and said, ‘Do not worry. We have left you enough. I can see more boxes in the back.’ They seemed bemused to hear me speak Farsi. Then I detected a volleyball net attached to two poles a few meters away from where we were all standing. I asked ‘Who plays volleyball here?’ They replied unanimously, ‘We do!’ I continued, ‘Why aren’t you playing now?’ They said, ‘Because we don’t have a ball.’

By this time amiddle-aged man and some teenagers were joining the crowd. I asked, ‘Where is your teacher?’ A young man, no older than 17, stepped forward. I pulled out a five dollar bill out of my bag and gave it to him in front of everybody. I said, ‘Would you please buy a ball for these kids so that they can play volleyball?’ He thanked me and put the money in his jacket pocket. The boys had become energised and started asking their teacher when they would get a ball. As we were departing, I turned around and said, ‘But you guys all have to study hard, OK?’ The middle-aged man approached and invited us to tea. We thanked him and said we must be off.

A little further along, we came across a villager with another teenage boy. The teenager was carrying a smooth ball musket, which caught Sara’s attention. She suggested that it must be from the old British Army and at least 200 years old. We asked to have a look. They allowed us to handle it. When they saw our interest, they said they use it to hunt partridges. The older man pulled out a small bag with tiny metal ball bearings and some rough gunpowder from inside his pocket. Sensing Sara’s excitement, he asked us how much we would pay for it. We thanked him and said we could not possibly take it across the boarder. Being pacifists we both were amused by the thought of trying to smuggle a functioning weapon back into the UK. I am sure we would have been able to get it off of him for $20. He seemed disappointed.

We carried on. Alongthe way we came across many more children and offered them gums; some took them enthusiastically, some took them suspiciously; some had to be assured by their accompanying adults that it was OK to take one, while in other cases the adult would take the pieces of gum and pass it on to the children. Yet some resourceful children thought of their own way of tricking us. After he got a piece of gum from us, one little boy claimed that there would be no more children along our path from there on, could we please give him the whole box. We all laughed.

Noon was approaching and the guesthouse was nowhere in sight. Rafi, having realised too late that it wasn’t going to be just a short stroll, began to voice his complaints by saying that he was hungry. He said he hadn’t had any breakfast before we set out. I offered him the Chinese pear I was still carrying in my bag. At first he declined politely, but when I insisted he finally accepted. By this time three little children had begun to walk with us. The oldest, probably 7, and the youngest, no more than 2, were sisters. The five year old boy with them was their cousin. We had already given them gums, but when they saw Rafi bite into the pear they stared at him. The poor man felt ashamed and asked them if they would like to have half of his pear? When they said yes, with some effort he managed to rip a piece off and give it to them.

After they finished eating their pear, the 7 year old girl asked, ‘Are you looking for the’hotel’?’ Rafi replied excitedly, ‘Yes’. Then she pointed in a direction further up along the river and said, ‘The hotel is that way. But it’s closed. The caretaker is in the village now.’

By now, Rafi looked tired and desperate. Sara suggested we find a nice spot next to the river and share some of the leftover sambosas she had brought with her. I had eaten so much the previous night that I still didn’t feel hungry. I took one sambosa and left the rest for the other two who were clearly much more hungry.

I took off my shoes and socks and rolled up my trousers to dip my feet in the ice-cold water of the river. The three children who had followed us sat next to me watching my every move. They had big beautiful eyes, with long eyelashes, but their skins were very dry and hair very dirty. Their small feet were partly covered with plastic slippers, but the visible parts of their tiny little legs were covered in a layer of dried mud. I had to look closely to recognise that they were not wearing socks. As I was sitting there watching them next to me, I realised that I am probably just as exotic and foreign to them as they are too me. [photo essay]

After about 20 minutes of sitting by the river, we heard footsteps approaching. The girl got up and said ‘That is the caretaker returning from the village’. We saw two men and a donkey coming. Rafi sprang up and approached them. He talked to them, as I was putting my socks and shoes on and while Sara was putting her things back in herbackpack >>> Part 2

PrevPreviousI lied. I am not the same girl.
NextIranian runner wins gold at Asian 800-meter eventNext