Protest against the Regime Sponsored Film Festival in Toronto 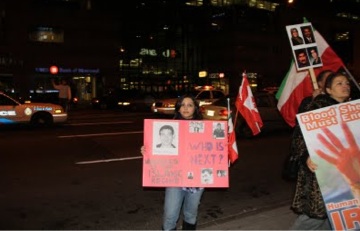 Iranian Artists in Exile organized a protest in front of the Empire Express Walk Theatre on Yonge Street in Toronto tonight at 5:30pm.

The protest was in response to the “Canada’s 1st Iranian Short Film Festival” which is organized by the Young Cinema Society, a group directly linked to the Ministry of Culture (also known as the Ministry of censorship) in Iran.

Shockingly, the First prize of the “Festival” is named in honour of “Seifollah Daad”, the Director of the “Anti Semitic” film, the “Survivor” and writer of screenplay of the film “the Son of Morning” the life of “Khomeini” directed by Behrooz Afkhami.

The Islamic Regime in Iran through Ministry of Culture and Islamic Guidance, known as “Ministry of Censorship” has been restricting and censoring artists inside the country for the past 30 years. Iranian Artists inside Iran cannot publish their art such as books, records, films, and must apply and receive the approval by the Ministry of Culture and Islamic Guidance. The suppression of “freedom of expression” and the state of censorship in Iran has had generated extremely difficult atmosphere for the artist which has led to the creation of “Underground Cinema/Arts” in Iran.

Also, while the Islamic Regime is busy murdering dissidents in Iran, as it did yesterday by murdering Ehsan Fatahiyan a young Kurdish activist, it is also organizing film festivals and other cultural events to try to show a civilized and humane side to the International Community.

Tonight we made sure that the people of Toronto and especially those who attended the festival saw the real face of the Islamic Regime. The protest started around 5:30 pm and I arrived around 5:45pm, I had made a poster, to show my great concern about recent human rights violation in Kurdistan, which featured the picture of Ehsan Fatahiyan on one side, underneath it I had written “murdered by the Islamic Regime” on the other side I had posted the pictures of other Kurdish activists who are currently facing execution and wrote “Who is Next?”

There were about 50 people or so gathered in front of the theatre on a very short notice given by the Art in Exile Committee, numerous opposition groups as well as many independent anti-Regime individuals like myself who shared the same concern; “we do not want Islamic Regime Cultural Lobbyists in Canada.”

As we kept on shouting “Down with the Islamic Regime” more and more people gathered around us. The security threatened on numerous occasions to call the police, however we refused to leave and continued with our peaceful protest.

I find it disturbing that agents of a terrorist Regime are free to roam around Canada and organize various so called cultural events even film festivals while freedom loving Iranians are threatened with arrest when they try to voice their objections to this terrorist Regime in a peaceful manner.

Once security realized that we were not going anywhere they called the police. It took about 25-30 minutes for the police to arrive and in the meanwhile we kept on holding our posters and banners and shouting our anti-Regime slogans.

Eventually 4-5 very large police officers arrived and threatened to arrest us if we did not leave immediately. Eventually we did leave peacefully but while still shouting “Down with the Islamic Regime in Iran.”

Outside of the theatre we continued shouting anti Regime slogans for about 20 minutes and a number of activists made various speeches about the protests and why we had gathered there.

It was an amazing night, where Iranians united against the Islamic Regime in the fight for freedom. We must and will continue organizing and attending such protests where Islamic Regime agents and lobbyists, through the use of propaganda try to show a non-existent humane side of the Islamic Regime.

For all the Ehsan’s, Akbar’s, Majid’s Hosseins and Feyze Mahdavi’s we must continue our fight against the Islamic Regime abroad.

The picture was provided by Mr. Faramarz Shiravand who was one of the organizers of the protest.

PrevPreviousI lied. I am not the same girl.
NextIranian runner wins gold at Asian 800-meter eventNext