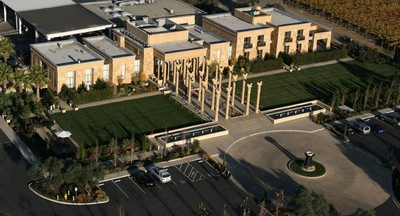 “The greatest wine I’ve ever had.”

Those are the actual words of Howard Stern. I was listening to his talk show on Sirius satellite radio this morning (I listen to him every day, including daily repeats) and I heard Howard and his co-host Robin Quivers giving a big shout out to Darioush wine. That’s a huge endorsement of a relatively young Iranian-American winery in Napa, California.

Howard mentioned that he was having some wine this weekend. He liked it so much he double-checked the label: Darioush! It happened to be the same wine Robin had recommended to him earlier.

As a super fan of the Stern show, I can tell you that he has rarely mentioned any wine by name. This was no plug. He was genuinely impressed.

I was delighted for Darioush. Most of us know about the winery because of the winery’s beautiful recreation of Persepolis (I did a photo essay when it was being constructed in 2005). But now the wine itself is being highly praised. I have tried the wines myself but I could not tell you if they were good or bad. Regretably, I have never developed a taste for wine. The reviews I heard from Iranians were mixed. Some liked it very much, others thought it was over-priced.

Thankfully millions of listeners will trust Howard and Robin’s taste in wine. Robin once ordered half a dozen bottles of $800 wine during a dinner with Howard, so she knows her wines!