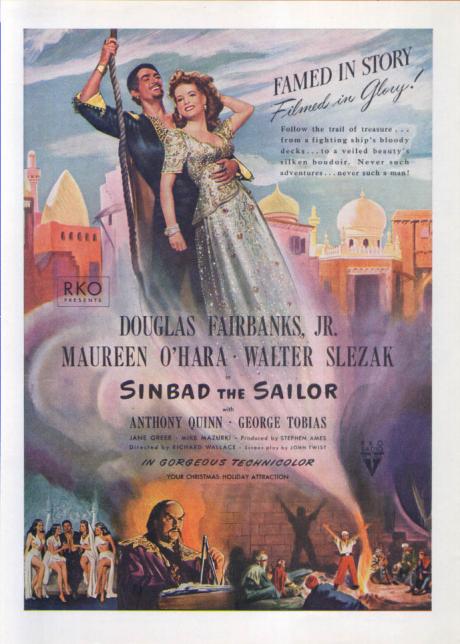 The storyteller Sinbad the Sailor (Douglas Fairbanks Jr.) is gathered with other men in the harbor telling his adventure seeking the island of Daryabar, where the treasure of Alexander the Great is hidden. In his journey with his friend Abbu (George Tobias), Sinbad rescues and claims property of a drifting boat; he meets the ambitious and gorgeous Kurdish Princess from Persia Shireen (Maureen O’Hara) and falls in love for her; he is chased by the evil Emir (Anthony Quinn) that is seeking the treasure to become one of the most powerful men in the world; and he meets the dangerous Melik (Walter Slezak) that also wants the treasure.

“Sinbad the Sailor” is a delightful adventure, in a type of naive movie that Hollywood seems to have forgotten in the present days. However, the success of the franchise “Pirates of Caribbean” proves that this genre is still attractive for the younger generations. The athletic Douglas Fairbanks Jr. is excellent in the lead role, showing a great chemistry with the gorgeous Maureen O’Hara and Anthony Quinn and Walter Slezak are great villains. The final twist in the very end is extremely pleasant, closing with golden key this entertaining movie

Tagline: “Never such a man as Sinbad!  The most amazing rogue of a thousand years of fiction…spinner of strange, wondrous tales…boldest braggart who ever made his boasts come true!  Sinbad…in the palaces and harems of ancient Persia!”

Scene with Douglas Fairbanks J.R as Sinbad meeting for the First Time Maureen O’Hara as a Kurdish Princess Sheereen from Persia during an Auction for a Ship:

Scene with Sinbad (Douglas Fairbanks J.R) Who Tricks a Persian Prince ( Anthony Quinn) and Elopes with his wife to be (Maureen O’Hara):

“Sinbad is a story teller who weaves great adventures about – himself. Whether they are true or not, no one knows. For this is the story of the eight adventures of Sinbad – as told by Sinbad. A ship saved by Sinbad and Sabu. A treasure map to the treasure of Alexander the Great, which mysteriously disappears from the ship. The beautiful Shireen – the woman who has stolen the heart of Sinbad. The evil Amir who wants the treasure for himself to own the world. The deadly Melik, who will stop at nothing and kill anyone to have the treasure. A perilous voyage to a mysterious island where the treasure is said to be held.”