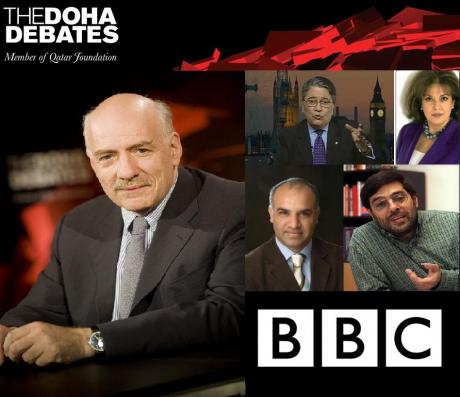 Debate in 5 Parts moderated by BBC’s Tim Sebastien with participants Alireza Nourizadeh,  VS Mahjoob Zweiri, Mohammad Marandi. Q&A followed by Vote over motion: “This House trusts Iran not to build a nuclear bomb” :

Result of Vote: A motion that “This House trusts Iran not to build a nuclear bomb” was defeated by 52% to 48% during an animated discussion in the latest of Qatar’s monthly Doha Debates.

A narrow majority of Arabs reject Iran’s assurances that its nuclear programme is peaceful and believe the country is planning to build an atomic bomb, according to the region’s only politically independent debating forum.

A motion that “This House trusts Iran not to build a nuclear bomb” was defeated by 52% to 48% during an animated discussion in the latest of Qatar’s monthly Doha Debates.

Two of the four-member panel and some of the 350 people in the audience expressed fundamental misgivings over Tehran’s nuclear plans, but there was near unanimous resentment over Israel’s nuclear arsenal.

Baria Alamuddin, foreign editor of one of the leading pan-Arab newspapers Al-Hayat, speaking against the motion, said that as an Arab and a Lebanese she naturally mistrusted Iran.

To loud applause, she asked the audience to consider what Tehran was “doing in Iraq” and in Iran itself. “(The regime) comes across as dishonest and devious and cannot be trusted at all when it comes to nuclear weapons.”

She said she found it impossible to trust a country whose President, Mahmoud Ahmadinejad, issued “almost daily” threats to the rest of the world that included calls for “death to Israel and America.”

Alireza Nourizadeh, Director of the Centre for Arab and Iranian Studies in London, joined Alamuddin on the panel in asking how anyone could trust a government “that kills its own people, tortures them and rapes them.”

Dr Nourizadeh, forced to flee Tehran under Ayatollah Khomeini for his outspoken political beliefs, said Tehran could not be trusted because “it had lied year after year” to the International Atomic Energy Agency and because it had clearly attempted to hide aspects of its nuclear programme.

Speakers for the motion and a number of audience members threatened at times to deflect the debate by suggesting that Israel’s possession of nuclear weapons gave Tehran the right to develop its own nuclear arsenal if it so wished.

Tim Sebastian, Doha Debates Chairman, had to repeatedly remind them that the question at stake was not Iran’s right to nuclear weapons but whether its undertaking not to develop them could be trusted.

Mohammad Marandi, head of the North American Studies Department at Tehran University, speaking for the motion, said the West’s relentless demonization of his country had provoked groundless suspicions over its nuclear programme.

He said the IAEA had not found any evidence to back up theories that Iran was aiming for a nuclear bomb and that it had been “found guilty until it proved its innocence.”

He insisted the Iranians’ construction of a nuclear facility “under a mountain” near Qom did not indicate any desire to develop secret bombs but came in response to constant western threats and the requirement to protect its facilities from attack.

Also supporting the motion, Mahjoob Zweiri, head of the Iranian Studies unit at Jordan University, claimed it was clear from IAEA findings that Tehran had no plans to build a nuclear weapon and that it was actually focussed on developing non-nuclear missiles.