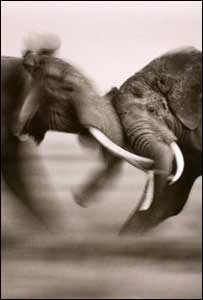 There is an African saying that when elephants fight, the grass gets trampled. The image of two behemoths going at each other with tusks and trunks, gouging and trumpeting, shoving and pushing is quite stirring. But more often than not, the actual fight is a transient encounter. It is the grass and the trees that bear the brunt of this show of force. They become the trampled patch of savannah, the grass that has been ground deep into the soil, the broken acacia tree or the ripped branch. The behemoths leave; the environment takes a long time to recover.

Shia Islam is based on multiple centers of jurisprudence and this model is integral to even the secular politics (such as it) of Islamic Republic of Iran (IRI). To say the Iranian government is opaque is an understatement. It is more like a kaleidoscope where the same hard objects roll around creating new patterns. Similarly, the ruling elite in Iran is not monolithic. It is collection of independent power centers whose control in the government ebbs a flows according to their alliances. Behind the solid façade, there are multiple politico/religious-economic groupings (dynastic fiefdoms), each vying for a superior position.

The ruling elite of the IRI is also dynastic. The West uses the derogatory term “cronyism” to describe this system, but in Iran, cronyism has been elevated to an exquisite form of government. Key officials in the government are related directly by blood, by marriage, or by allegiance to a specific dynastic grouping.

These dynastic groups give individuals considerably more strength than their nominal political position. In fact, each dynasty makes sure that the appropriate person is in place to guarantee its “sphere of influence”, its political, economic and social agenda.

Confrontation results when interests intersect. Hostilities are inevitable but the control mechanisms are also in place. Often such encounters are settled internally by the dynastic groupings. The conflict is hardly ever allowed to get out of hand or visible to world at large. These dynastic hierarchies interact with each other on multiple levels, with multiple means, through many different individuals, some in the government, some not and thus have sufficient safety systems to defuse most potential conflicts.

It is the role of the supreme leader to be the arbiter of last resort, to maintain a balance between each dynastic group’s spheres of influence, preventing them from violently colliding or cooperating too much. He has to maintain the façade of solidarity and impartiality while refereeing a multi-team melee.

So what happened this time? Superficially this was a presidential election between an incumbent and a challenger. But behind the scene, there was more at stake. There was a major power struggle between the elite at the highest levels of the IRI, a struggle for total domination of the government. The concept of a multi-polar, dynastic control of various parts of the government was being challenged by a more structured centralized command.

Centralization of the control required that the dynastic houses be integrated, diminished or eliminated. This model caused an up-roar in the ruling dynasties since it would dismantle their carefully constructed, lucrative and expensive to maintain dynastic fiefdoms. It was not going to happen unchallenged.

The supreme leader, unlike past conflicts, ceased to be a semi-partial arbiter and choose sides. He apparently accepted the centralized model against the multi-polar one. The other dynasties also picked their options and instead of a smooth change of guard and reinstatement of a functionary, the fight got down, dirty and personal.

This time the disagreement was not restricted to the drawing rooms of the elite. Each group mustered its cohorts and took their fight into the streets. Even if the referee had chosen sides, the other teams could not afford to leave the scene peacefully. This was a winner takes all game and the loser would be eliminated, not figuratively from the seat of power, but literally and brutally!

The elephants went wild and what ensued was the trampling of the grass and the tearing up of the trees. It is too early to see if the elephants are going to fight to death or establish some sort of modus vivendi.

But, regardless who becomes the dominant bull; the grasslands and trees take the brunt of the harm; their scars are on display for all. The elephants walk away and are once again ignored.