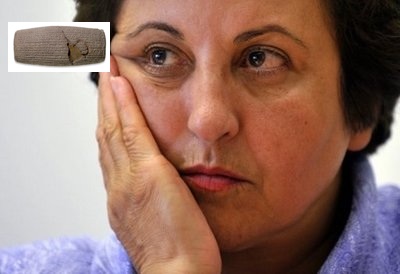 Having won the Nobel peace prize in 2003, Iranian lawyer Shirin Ebadi is now the first laureate whose medal has been confiscated by a government. The human rights lawyer is currently abroad and will be thinking about the wisdom of returning to her country – the award was plundered from a safe, along with her French Legion d’Honneur medal and a prize from a German press association.

She told the BBC: “They said they would detain me if I returned, or that they would make the environment unsafe for me wherever I am.”

The Norwegian foreign minister, Jonas Gahr Støre, described the move as “shocking” and said it was “the first time a Nobel peace prize has been confiscated by national authorities”.

Ebadi is also being asked to pay back-taxes on the £800,000 she received from Norway, which, she says, cannot be levied on prize money.

The news will worry the British Museum which is about to loan the 2,500-year-old Cyrus Cylinder to Iran as part of an exchange agreement – it borrowed antiquities from Iran for an exhibition earlier this year.

The BM is counting on protection from seizure laws in Iran to prevent the Islamic Republic from confiscating what many Iranians believe to be the world’s first human rights charter.

In her speech to the Nobel committee Ms Ebadi said: “I am an Iranian. A descendent of Cyrus The Great. The very emperor who proclaimed at the pinnacle of power 2500 years ago that… he would not reign over the people if they did not wish it. And [he] promised not to force any person to change his religion and faith and guaranteed freedom for all. The Charter of Cyrus The Great is one of the most important documents that should be studied in the history of human rights.”

Given that her medal is now in the hands of the Islamic Republic, the BM should reconsider its loan of the Cyrus cylinder, on which the ‘charter’ Ms Ebadi referred to is inscribed – it is due to go on display in Tehran in January.

According to one source, the chances that the Iranian government will decide to keep the cylinder are “very high”. Iran’s clerics have a history of hostility towards Iran’s pre-Islamic heritage – after the revolution, Ayatollah Sadegh Khalkhali threatened to raze Unesco-recognised world heritage sites with bulldozers.

In 2007 the Islamic Republic ignored a campaign to stop the Sivand dam being built which experts fear will destroy Persepolis. (Khalali did destroy the mausoleum of Reza Shah.)

Britain need only recall standing by as Iran seized 15 Royal Navy personnel in 2007 to know that lending the Cyrus cylinder to Iran is a bad idea – there will be nothing we can do. And it is perfectly conceivable that it will be damaged or destroyed.

In any case, given the recent violence in Iran against peaceful demonstrators, illegal detentions, torture – with reports of physical violations commonplace – the museum is surely duty-bound to deny or at least delay the loan of this priceless antique.

The BM, however, is adamant that the planned loan will go ahead. Given the fate of Shirin Ebadi’s Nobel medal, however, that doesn’t bode well for her hero Cyrus’s cylinder.