No Rest or Peace 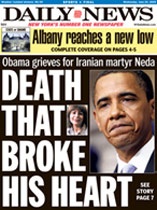 The ruthless exploitation of the death of Neda for political purposes is an egregious example of a propaganda war being waged by the enemies of Iran – everyone should be concerned, however, since the manipulation of the media and public opinion is a feature of domestic news coverage in the West as much as it is of reporting on a Middle Eastern state, notes Reza Esfandiari and Yousef Bozorgmehr.

The tragic death of Miss Neda Agha-Soltan continues to reverberate five months after her shooting in Tehran. Documentaries have been made about it on British and American television and a scholarship has been awarded by no less than Oxford University in her honour. The pertinent question that needs to be asked is: why?

Why does the international media focus so much macabre interest in the dying moments of an Iranian woman? Why is there is such callous disregard for her right to privacy that her death should be viewed all over the world on Youtube and Twitter?

The answer, of course, is simple: Neda’s murder has been scurrilously exploited by those who seek to put a beautiful name and face to the “struggle for freedom” in Iran. These same people have decided to posthumously call her the “Angel of Freedom [1].”

Miss Agha-Soltan, it should be remembered, was not shot while in the act of any demonstration – the incident happened in a side street at least a kilometre away from where the protests were occurring. Moreover, the unassuming young woman was neither a political activist nor had any affiliation to a civic organisation. She was a student of Islamic philosophy with musical interests and who had a desire to become a tour guide.

If she intended to take part in any protest, she was certainly not any different from the hundreds of thousands who also did. And, unlike some of the more riotous elements among the demonstrators who also lost their lives, Neda did absolutely nothing to provoke any hostility from the security forces, let alone being shot at. She was a threat to none.

Yet we now have begun to hear that she was a high-profile “natural leader” [2] of the protest movement, “committed to the overthrow of Ahmadinejad” whom the Iranian regime had every reason to fear. And if that isn’t enough, she was determined not allow Iran to suffer the fate of a “tyranny worse than that of the Arab and Mongol” invaders of the past [3]. We are also told how she was prepared to be “shot through the heart” [4] in her pursuit of “freedom and democracy for the Iranian people”.

Of course, all of this is utter nonsense that only the most naive of individuals cannot see through. There are several points that the “investigative documentaries” failed to account for or delve into in any way.

A letter sent by the Iranian embassy in the UK to the Provost of Queen’s college [5], which has awarded the Neda scholarship sponsored by an undisclosed British citizen, correctly states that Neda had a high-resolution camera trained on her for a full 20 minutes before the incident took place – this, along with other important observations [6], does give the appearance of it being a pre-rehearsed and staged scenario.

The letter goes on to the mention the fact that Dr Arash Hejazi, a publishing student and medical doctor at Oxford Brookes university, had arrived only two days prior to Neda’s death and left the day after anxious to tell the story to the British media of an innocent woman being shot by a Baseej militiaman – this despite the fact that the Baseej never ever carry firearms outside of military compounds (they use sticks, chains and other household items).

The media has since accepted his testimony uncritically, in particular Times of London correspondent Martin Fletcher, who has been nothing short of an obsessed anti-regime propagandist in the wake of the June election. Indeed, Dr Hejazi changed his story early on – he had initially claimed that the assailant was a rooftop sharpshooter [7], but later said that Neda was shot by a man on a motorcycle [8].

Anyone with even a measure of circumspection would be suspicious of Dr Hejazi’s actions and motives as well as his possible involvement with British intelligence which regularly approaches Iranian students and residents in the UK to serve as informers in Iran. Yet, he is hailed as the “man who heroically tried to save” a bleeding Neda (although there is very little to show for it).

The stolen/lost ID card of a certain Abbas Kargar Javid, posted on the Web with the intention of inviting vigilante-like retribution [9], and the video of a semi-naked man being accosted by demonstrators [10] prove absolutely nothing. There is nothing that links any member of the Baseej force with the murder of Neda. These two pieces of “evidence” were both produced after several months had passed, indicating that they were most likely dug up among the myriad of video footage and documents from the days of the unrest. Moreover, other witnesses present at the scene deny that there was any security presence.

It is inconceivable that an Islamic regime which understands the power of martyrdom in its own culture would sanction the cold-blooded murder of an innocent and ordinary young woman on the streets of Tehran.

However it is every bit conceivable that those who thought the opposition movement needed a symbol and icon of resistance – recipients and supporters no doubt of a $400m CIA-backed destabilization program for Iran [11] – would have arranged this horrible murder and try and pin it on the Iranian authorities.

It is especially salient that the British TV station, Channel 4, whose investigative “Dispatches” program had exposed that policewoman Yvonne Fletcher had not in fact been killed by Libyan diplomats but by underworld operatives linked to the American Government [12], would be so compliant with the official version.

The appalling and brutal murder of an Egyptian woman, Marwa El-Sherbini, in a German courtroom in July of this year has – just a matter of weeks after Neda’s death – has largely been ignored even though it is one of the worst racially-motivated and Islamophobic killings in recent times. Will Mrs Sherbini, “the headscarf martyr”, be honoured in any way by a German university or have films made in commemoration of her? Of course not.

The ruthless exploitation of the death of Neda for political purposes is an egregious example of a propaganda war being waged by the enemies of the Islamic Republic of Iran – everyone should be concerned, however, since the manipulation of the media and public opinion is a feature of domestic news coverage in the West as much as it is of reporting on a Middle Eastern state.

AUTHORS
Reza Esfandiari and Yousef Bozorgmehr can be reached at: esfandiarireza@ymail.com.

[4] Telegraph: Iranian killed in protest was willing to be ‘shot in heart’