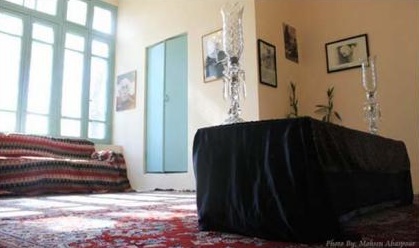 In a quaint, sleepy town named Ahmad-Abad, there lies in state Iran’s old political lion buried in the grounds of his dining room in a family house that served as both his sanctuary and prison for nearly ten years. There he lies as if awaiting a long overdue state funeral, but there are no statesmen present to pay their respects and no honor guards flank the coffin at each corner.

At the time of Dr. Mohammad Mossadegh’s death, there was no abrupt interruption of nation’s regular television programming, no chocked up announcer carrying the devastating news of our loss to the world, and no footage paid homage to his life and legacy. Not even a moment of silence was observed by what should have been a grieving nation. Young and old don’t recall the precise moment of such occasion.

As the dawn of a cold Esfand day approached, his last dying wish was refused. The old, frail, and beleaguered prime minister was not permitted to rest in peace in the cemetery of his choosing. Dr. Mossadegh’s destiny was to lie in repose to this day. Thus lolls his dream and lingers his roar.

By his contemporary counterparts, at the outset of the 21st century, political independence from foreign powers is portrayed as a boyish delusion plagued by the realities of Iran’s modern history. Our country’s politicians and activists have found a comfort zone within which they justify foreign interference in Iran and seek handouts from abroad. The prescriptions written for nearly all of our ailments include but are not limited to military strikes and attacks, economic sanctions and blockades, or political overtures from colonial powers.

The notion of bringing about change to our homeland singlehandedly has become impractical and unrealistic, a deed that is beyond our reach, a dream that has been banished with Mossadegh. Simply put, Iran’s political activists have written the obituary of their independence and have succumbed to the perceived inevitable fate of our people: Nothing short of foreign interventions can topple the Islamic Republic of Iran. Thus lies in limbo our future.

In the streets of Iran, however, the ousted prime minister’s mandate is very much alive. It boils in our veins and feeds our fury; it has become the central theme of popular resentment towards the transgressions of the Western powers. In the collective consciousness of our nation, while the glorious Persian civilization resonates in our present day identity, centuries of political oppression by a series of corrupt rulers have created a much deserved mistrust of foreigners.

Meanwhile, our motherland has become the breeding grounds for a cult of politicians and activists mastered only in the art of concessions, deceptions, and self-preservation. In their zeal to overthrow the Islamic Republic of Iran, the same breed of activists advocates military attacks and economic sanctions against the regime of mullahs and offers the riches of our country to imperial powers as the great return on their investment.

Ever pragmatic, these opposition groups also foresee promoting democracy after the demise of theocracy by the hands of outside powers. In return, we are told, Iran and Iranians will live happily ever after to the anthem of Camelot, thus remixed to our liking.

Surprisingly, the lessons learned from current debacles in Iraq and Afghanistan are entirely overlooked: The foundation of a true democracy can neither be built within the walls of a Green Zone erected by imperial ambitions nor in the confines of mushroomed concrete blast walls. The seeds of freedom can neither be sown by the sons and daughters of foreign lands nor by the hands of home-grown thugs and tyrants. The rights of women can neither be negotiated with nor sold to the clergy in the name of “Shi’a Family and Personal Status Law.”

Let there be no doubt in our minds that Iran’s path to democracy must be paved with our bones, painted by our blood, stained by our sweat, and sodden by our tears. There are no shortcuts, no quick fixes, and no peaceful transitions that grant us freedom and release us from bondage.

The precursor to the establishment of a democratic government for our motherland is not the fall of the Islamic Republic of Iran. This condition although necessary is not sufficient enough to guarantee the inception of democracy in our soil. On the other hand, the boldness of “can do” sentiments amongst Iran’s activists, the pride in one’s own political independence, and the mandate to reject weakness in dealing with foreign powers are the ingredients of the magic potion.

Nowadays, even though a multitude of political undercurrents craves a true secular, rule of law for our nation, the stage is ominously empty of activists projecting the fervor of the masses for political independence, national sovereignty, and international recognition and respect.

To rebuff the willingness of the Western powers to interfere in our country’s affairs is not political suicide; it is an intellectual rebirth, a nail in the coffin of the mullahs, a precursor to the establishment of democracy. The political maturity of such boldness breeds nationalists, the heirs to a fallen prime minister, the leaders of a new era.

Iran cannot and will not dance, after all, to the tune of Camelot remixed. Iranians will, however, swagger to the song of Shahnameh recited in the anthem of its original melody…