Hagh Mossalam and other thoughts 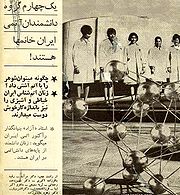 In the early 50s, Turkey and Iran had the same aspirations for democracy and peace which resulted in the development of the entire ME region. In Iran, this democratic impulse was embodied in the charismatic person of Mossadegh, whose basic ideas were, at that time, not too far from those of Nehru. In Turkey, democracy was ignited by the spectacular victories of the pro-Western and moderate Democratic Party of Adnan Menderes resulting in the opening of the political scene, even to Islamic movements which were repressed mercilessly by Kemalism.

I believe that the violent overthrow of Mossadegh in 1953 and Menderes five years later by an alliance of Kemalist forces and military apparatus, though dramatic were inevitable and even, unfortunately, necessary. The post Stalinism era was marked by a fierce appetite from USSR to control and dictate Union Soviet’s policy to its direct neighbors. In Europe this policy resulted in the collapse of eastern countries which became USSR’s satellites. In the ME, the question of oil forced soviets to play a more lurking game as a direct grip over oil countries would have inevitably ended into a direct confrontation with the West. In the other hand, I think that if Mossadegh was not overthrown, he would have depended more on a communist movement which was at that time better organized and more consistent in an intellectual level, and would resulted into a bloody confrontation with leading ayatollahs (i.e. Kashani et co.)who designated communists as heretics and had an excellent control over ordinary people. This was also the case in Turkey where Menderes was challenged both by an increasingly powerful Communist Party cherished by intellectuals and an Islamist movement deeply inked in the country – It is also to be said that pronazis forces took their advantages in the departure of Mossadegh and Menderes a bit later, but that is another story.

What we should learn from all this painful episode is that after Mossadegh’s resignation, the Iranian oil hasn’t been confiscated by the British. And now, though extremists like Khamenei and Ahmadinejad who have transformed the Iranian nuclear program into a scarecrow, we should all be aware that this program, started under Shah’s supervision, constitutes a national heritage. Further, it is also clear that after thirty years of dictatorship the actual, deeply corroded, regime will not succeed to control the society aspiring for real changes. If the aspiration of change in Iran is backed, our country, besides other developing countries like Turkey and Israel, will become once again a major and active partner in the region. Any other solution to the democratization of Iran will lead to a disastrous confrontation which final step would be the establishment of a united front of an extremist Islam against the entire world.