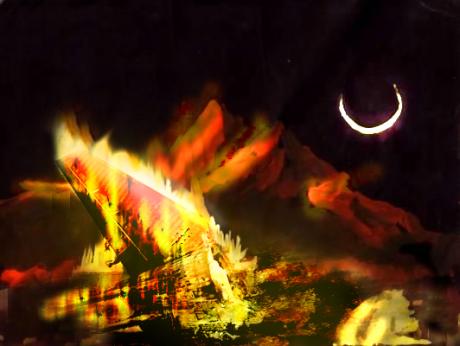 New York–Amid growing international concern over Iran’s nuclear ambitions, and renewed talk of not only strengthening sanctions, but bombing Iran, I spoke with my 21yr old Iranian friend who lives in Tehran. We met on the internet through our shared enthusiasm for certain kinds of music, and have found that we can also talk about religion and politics without fighting. In accordance with his wishes and those of another Tehrani friend who created the illustration for this article, I will not publish their names.

JJ: I went to a panel discussion about Iran recently where an American General talked about bombing Iran. My American friend asked what we can do to support human rights in Iran, but the General avoided the question at first. He returned to it, mentioning that for awhile it looked like Iran’s Green Movement might topple the regime–but the Iranian regime cracked down hard. I wondered to myself–the US is worried about Iran getting nuclear bombs, but what if Iran already has nuclear bombs and hasn’t used them? What do you think, doostam?

They have bombs called Shahab 3, but not the uranium to put on them.

Iran has the missles, but not the enriched uranium to make them nuclear?

When they get it, do you think they will bomb the “Zionist regime” of Israel?

If Mousavi was Iran’s president, would Iran be less dangerous than with Ahmadinejad as president–if Iran did get nuclear bombs?

Really there is no big difference between Ahmadi or Mousavi, because everything is in the hands of Ayatollah Khamenei–Supreme Leader.

Yeah, they have. They have a lot of money, a lot of forces, and a lot of men.

What do you think of the conflict in Yemen–and the Saudis against Iran?

I’m not interested! But in religion, Saudis are Vahhabi. And Vahhabis think that Shia’s are Moshrik. Do you know what Moshrik is?

Mmm, it’s hard… http://en.wikipedia.org/wiki/Shirk_%28Islam%29 And I’ve heard that Vahhabis believe that if they kill two Shia’s in life they will go to heaven. I don’t know exactly, but it must be something like this. This is not a modern war. I say it’s the old fashioned Islam War.

Do Shia’s believe that if they kill people, they will go to heaven?

I’ve never heard of it. But in Quran there are a lot of ayes about killing.

Some people here in the US say Islam is a religion that supports violence. But some Muslims here say, “No, it supports love.” What do you think?

Quran is so complicated. You can have both impressions of Quran.

The Christian Bible is complicated too. The Old Testament seems to support violence. But Jesus supported non-violence.

People that believe in religions–like hard Muslims or Jews or Christians.

Religion can make people into tools.

The US is worried about Iran getting nuclear bombs, partly because Iran is religious–more religious than the US.

Are you worried about Iran getting nuclear bombs?

The US has been trying to negotiate with Iran, but Iran is taking so much time. Some people in the US think Iran is just stalling in order to get time to get nuclear bombs.

But if the US is going to bomb Iran, they will just bomb the nuclear facilities in Esfehan and Ghom.

And Natanz and Bushehr. Maybe more, if the US or Israel know about more. This could make a radiation problem.

Yeah, a lot of people will die–maybe me too.

What should the US do?

How would stopping sanctions help?

Then the Islamic Republic couldn’t say the US is not showing good will and is not being honest.

What is the relationship between sanctions and honesty?

Look, today Obama said, “We will talk and negotiate with Iran.” Tomorrow they do more sanctions. What would you do if you were Iran?

Well, Ahmadinejad said he might negotiate, bu the Iranian Parliament said, “No negotiation to send uranim to Russia to be enriched.”

No, it’s not like this. They just have the problem of HOW the trade will be done.

I hope so. I read something different. But maybe it changed again.

But if I was a politician, I would do what the IR is doing right now. It’s not a good way–talking about negotiation and doing more sanctions at the same time.

Iran doesn’t trust Russia so much, because Russia is taking too long with the Bushehr nuclear facility.

Russia messed up Iran a lot of times throughout history.

We have good relations in our history with China. Do you know about negar gari?

No, what is negar gari?

It’s an art form, a very well known Persian art form. Kamal Edin Behzad is one of the most famous artists. Negar gari minatures are inspired by Chinese paintings.

For hundreds of years?

What effect have US sanctions had on Iran?

They’ve had a lot of effects on airplanes and airline industries.

Because Iran used to buy US airplanes?

Yeah, and they need parts. And the sanctions effected the oil industry, and a lot of things. But Iranians have found ways to get out of them.

Ways to get out of sanctions?

By making them not work. They make companies in Malaysia.

What kinds of companies?

Some people here say sanctions hurt poor people the most.

Do you think that if the US dropped sanctions, it would stop Iran from making nuclear bombs? Or is it possible that Iran would still make nuclear bombs, plus the Iranian economy would be stronger?

Dropping sanctions would open the way to better negotiations with Iran. They can’t negotiate with people who sanction.

You said before that Iran is just trying to figure out HOW the uranium enrichment with Russia would happen. That is negotiation, isn’t it?

Yeah, it is, but it makes it complicated when new sanctions are brought by the US.

The US may make new sanctions because Iran is taking too long to negotiate.

Maybe, but I just saw the news on the BBC. The headline was “Obama said, ‘We will negotiate with Iran.'” The third headline was, “New Sanctions.” It’s not good.

If US makes new sanctions against Iran, what will happen?

What effect would stronger sanctions have on Iranian people?

You saw the airplane crash last year? That’s because of sanctions.

If that is true, flying inside Iran will be very dangerous. This will effect Iranians, and also tourists. I flew from Tehran to Yazd.

Mersi, azizam. If planes crash in Iran because of sanctions, does this make Iranians mad at the US or at the Iranian government?

In closing, US trade sanctions against Iran have been in place for so long, my friend’s suggestion that we drop them altogether seemed quite shocking. This is a good time to closely examine the sanctions already in place. I must add that although I am concerned that innocent airpassengers’ safety may be jeopardized by sanctions, I also realize that passenger planes can be used for violent purposes.

The panel discussion I mentioned in this article was presented by United Against Nuclear Iran and Bipartisan Policy Center, on November 23rd at the 92nd Street Y in New York. It included speakers General Chuck Wald (Ret.) USAF, Senator Charles Robb (D-VA), Senator Daniel Coats (R-IN), and was moderated by Dr. Leslie Gelb. UANI literature distributed at this event advocates boycotting companies who do business with Iran, while the UANI website additionally advocates sanctions that reportedly seek to prevent US taxpayer money from going to companies that do business with Iran.

I realize that boycotts could also be performed by consumers who do not support legislated trade sanctions against Iran. For instance, many Iranian Green Movement supporters requested an international boycott of Nokia-Siemens after it was discovered that they sold spy technology to the Islamic Republic of Iran which facilitated the regime in tracking down cell phone users’ locations and also opening private emails. The regime exploited these new capabilities during their violent crackdown on voters questioning the “official” results of the 2009 Iranian presidential election.

Julie Jigsawnovich is a writer, artist and musician living in New York City. She is currently trading English lessons for Persian lessons. She’s hopes to be able to read Iranian poetry in the original script in the future. Contact her at: jigsawnovich1@gmail.com