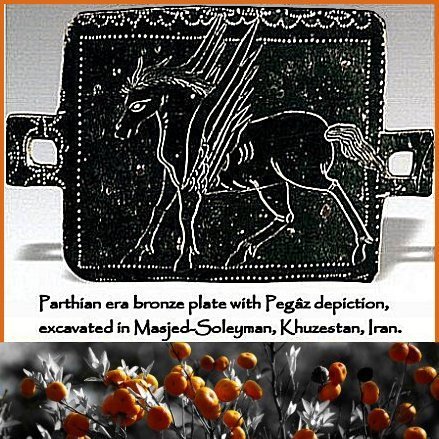 The young Prince smiled on the doting Deev, rode on the path she had shown and climbed up to the top of the mountain she had named. On the top of the In-between Mountain, a winged black horse named Pegâz was tied to a tree. He got down from his own horse, untied Pegâz’s reins, tied his own horse’s bridle in its place and then mounted the winged steed.

In a burst of excitement, the horse flew up in the air like a flash of lightning, so fast that the Prince almost fainted with fear. In one day and in a sky that changed from dark grey to white to bright blue to pinkish-purple, then back to white, Pegâz flew over mountains and valleys, above rivers and lakes, over cities and towns, across meadows and fields of crops, a distance that would have taken a year on his own horse.

The next dawn from afar, the Prince saw the Mount Qâf and the magnificent Pariestân and the Orange ‘n’ Torange Orchard that covered a small portion of it. He pulled the reins back gently until Pegâz came to a halt atop the mountain. He sat down on a rock to relax, staring up at a half moon out in the cool, wide open and golden sky of the rising sun. As the sun moved up into early morning, Mehrbun went hunting in the hills of Mount Qâf, following the Deev’s instruction. He threw a stone with his sling, killing a wild goat that he carried on the winged black horse to the front-gate of the Orchard.

The Prince had been told that this orchard consisted of three intertwined plots. At the front-gate, lay a dark blue female dragon that guarded it. As soon as she made a move towards him, the Prince threw her the game, watched her eating it and galloped inside.

The first plot was full of sunshine greenery, colourful beauty, fruitfulness and fragrances. But its fruits were made of gold. They were the dragon’s golden treasures that the depraved Deevs, who had taken over the Orchard, could not possess. The dragon was stronger than all of them combined. When the Prince reached the gate of the second plot, which was full of oranges and toranges, he saw Xeshm, the male Deev of wrath. This gatekeeper was tall and strong, with red-skin and spotted body, two black horns, and a bloody mace in hand. The Prince greeted Xeshm and asked permission to go inside for sightseeing.

“Listen, I sew irrational arguments to express myself,” the Deev of wrath said. “I also sew my eyes and ears not to see or hear those I strike who smile at me or wish me well. My sewing needle is broken, if you give me a new needle, I’ll give you permission to enter.”

The Prince handed him the needle cushion and rode through the second orange and torange plot towards the third one. At the gate of the third plot, was standing another male Deev, shaped like a gigantic pig with three heads. He was Âz, the Deev of Greed, and he wanted a new broomstick to sweep the walls of his bottomless pit of avarice. The Prince handed Âz the broomstick he had been given and rode on.

Deep within the third orange ‘n’ torange plot, where its four paths lead to a small clearing, the tree branches were dense and intertwined, and at the foot of every tree lay a depraved Deev. As the doting female Deev had advised, he did not disturb them. Instead, he spurred his horse towards the back-gate while reaching and picking seven oranges and toranges. As soon as he picked them, he heard female voices crying from inside the fruit.

The depraved Deevs woke up and followed him swiftly.

“You’ll be killed if you don’t come back here!” They shouted.

But before they could put their hands on the Prince, he escaped from the Orchard on powerful Pegâz like an arrow zooming through the sky, leaving kilometres and farsangs behind.

After a whole day of flying wild and free, the Prince reached the top of the In-between Mountain. He dismounted, untied his own horse from the tree and securely retied powerful Pegâz. By not being on the winged black horse that belonged to the other world, and with Pegâz’s hooves on the In-between Mountain, the Deevs would not be able to reach him in the world of Humans.

As the morning sun rose higher, he rode down the mountain, passed the old female Deev’s cottage and entered the Forest of the Pestering Paries. Once again he heard the Paries’ entrapping chants and was attacked by the bugs and beasts. The loud droning of hideous flying creatures filled his ears and rang in his head. However, he paid no attention to them and didn’t look back until the next day when he got out of the forest into a windy steppeland.

The wide, open space was dotted with roaming herds of wild horses and bounded on all sides by majestic, tranquil mountains. He rode across the steppe and then into the mountains for some time thereafter until a curve in the road revealed a vast flat valley and many more mountains beyond. He entered the valley, which was hot and dry but peppered with oasis of trees and water.

He soon reached a stream that flowed through the land. He dismounted under a willow tree by the water, knelt on the stream’s grassy bank and began washing his hands, splashing water over his face and drinking some out of his hands. The water in the stream, like his thoughts, was flowing freely along its path, stopped by nothing. He took out the seven citrus fruit from his pocket. Three of them were oranges and four, toranges.

“Give me bread,” a pleading voice called out from within an orange.

The Prince opened the bundle and took out some bread, which he placed firmly on the skin of the fruit.

“You made me die,” the voice moaned. The Prince was confused.

“Bring me bread,” another voice came out of a torange a few moments later. The Prince opened the bundle of bread again and placed a piece on top of the torange.

“You made me die,” moaned the same voice.

The Paries within the oranges and toranges perished as soon as the Prince gave them what they had requested, until one torange was left. He did not want to

respond to any request coming from the last torange for fear of never having the chance to meet an Orange ‘n’ Torange Girl alive. He was quite upset and didn’t know what to do. Ultimately, the Prince remembered his last feather and decided to

seek assistance. He collected two pieces of wood a few meters from the wet bank, rubbed them together with great force, kindled a fire and burnt his last feather to call me.

I appeared before him under the willow tree as the Luminous Old Woman. I could not see any oranges or toranges. So I asked if he had reached the Orchard. He pulled out of his pockets oranges and toranges and showed them to me.

“I did,” he said, “but what’s the use? I went to all the troubles of picking seven oranges and toranges embodying seven girls, but six of them are now dead. I don’t dare respond to the last Parie’s call, lest she too dies.”

I suggested that he throw the dead oranges and toranges into the running water so that they could grow into trees. But above all, I advised him to offer perfume to the last torange if its Parie asked for bread, and offer bread if she asked for perfume; that way she would stay alive.