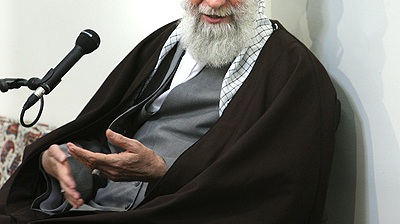 In the past thirty years, the power structure of the Islamic Republic of Iran has moved from populism to clientelism, and now to militarism. The triangle of power that includes Supreme Leader Khamenei, the Islamic Revolutionary Guards Corps (IRGC), and President Mahmoud Ahmadinejad is much more fragile as opposed to the previous power structures. Why?

During the first decade’s populism, power rested in the hands of the unrivaled and charismatic leader Ayatollah Khomeini. Very few people, if any, could act against his will and his policies. After Khomeini’s death, the structure of power changed to clientelism, a system of many vertical columns of rival and autonomous groups and institutions, such as government officeholders, congregational imams, revolutionary courts, the Guardian Council, and many hidden interest groups formed in patron-client bonds, all around the leadership of Khamenei, Khomeini’s successor.

This clientelist power structure, which enabled political elites to have access to social status, political power, and economic resources, was the key to the regime’s sustainability, but it deprived the majority of people of their rights. With the onset of the recent crisis, the triangle of power—Khamenei, Ahmadinejad, and the IRGC—has pushed aside this power structure. In the new structure, the Supreme Leader has lost the role of mediator and has openly sided with military oppressors.

The modern, educated, young, and urban middle class, who had hoped for reforms during the 1997 election that brought former President Mohammad Khatami to power, were pushed aside with a pre-planned election on June 12 designed by the Guardian Council and the IRGC to reelect Ahmadinejad. Supporters of the valayt faqih learned that the “masses” (less educated, low income, traditional groups) were the only ones who accepted their divine rule. Therefore, in supporting Ahmadinejad’s campaign, they used slogans such as the fight against poverty, injustice, and corruption, and promises such as distributing the oil money among the masses, to bring the populist government of Ahmadinejad to power.

This move confused even some of the leftist and anti-American groups. In practice, the government of Ahmadinejad spread superstitious beliefs and distributed money among the lower classes of society in order to mobilize them against the middle class. Despite promises made during the presidential campaign, and Ahmadinejad’s populist appearance, his administration has abandoned economic equality and has turned out to be one of the most corrupt in the Islamic Republic’s history.

Oppression, intimidation, and political pacification of the middle class and the reformists on the one hand, coupled with financial support to energize the lower classes and supporters of divine rule of velayat faqih, in addition to the creation of continuous tensions with the West, have been the foundations of the Ahmadinejad doctrine. Through distribution of money and planning “provincial visits,” the triangle of power believed that Ahmadinejad was building a solid popular base and that he would win reelection with ease. Therefore, they decided to make the race more interesting in order to bring more voters out to the polls, thus showing off their legitimacy and popularity.

Much to the surprise of Ahmadinejad’s supporters, the distribution of money and populist slogans only created new dissatisfactions. Distribution of money led to inflation and increasing unemployment, which badly damaged domestic production. The nation’s economic difficulties, Ahmadinejad’s empty promises, his unbalanced personality, and his continuous efforts to fool the masses rallied the people against him and ruined his chances for reelection.

As the election date approached, the Khamenei wing realized that opening the political atmosphere for a mass turnout created a social movement, so they decided to rig the election. Electoral fraud caused the masses to react and lose their patience and pour into the streets. The triangle of power then decided to control the situation with brute force. Using such levels of brutality did not end the protests and only delegitimized the government further. Since then, the government has only managed to stay in power through daily suppression of the opposition.

As time passed, the scope of the crisis became much wider. Efforts made by the conservatives to calm the crisis have been fruitless so far. Proposals made for mediation or national unity have been ridiculed by the radicals behind the rigged presidential election. Radicals believe that making any concessions to the opposition would endanger the regime. On the other hand, anti-Ahmadinejad conservatives believe that suppressing the opposition would not grant legitimacy to the government and would seriously threaten the survival of the regime. These two different outlooks will create further cleavages within the ruling elite.

In addition to domestic crisis, oil prices have gone down significantly. The Ahmadinejad administration became too dependent on oil revenues, and now the government is risking international sanctions that would further isolate the Islamic Republic. This tension is also going to widen the cleavages already in place within the system.

Long story short, this exceptional situation is not sustainable. Returning to the pre-election situation is also impossible. The following two scenarios could take place. The triangle of power may ignore internal and external pressures and stay firm until its own complete elimination. Or, internal divisions among conservatives may force Khamenei and the IRGC to conclude that in order to sustain the regime they must remove Ahmadinejad, which would have its own consequences.

The last word is that the collapse of society and the destruction of security are not beneficial to people and do not aid democracy. People must learn how to avoid violence and stay away from chaos. The Green Movement must warn the government of the consequences of oppressive policies and insist on the people’s right to determine their own future. This movement must now follow through with the demands made during the peaceful demonstrations. This is necessary for both the people and the government.

AUTHOR
Kazem Alamdari is a professor at California State University.