The State of the Opposition is Strong 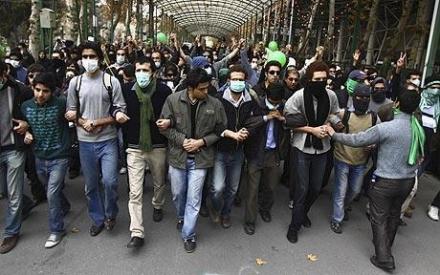 A couple of days after June’s stolen election in Iran, Flynt Leverett and I were both guests on “The Charlie Rose Show.” Mr. Leverett was waxing eloquent about how Ahmadinejad could have actually won the election. His supposed evidence was a May poll, conducted by phone from Turkey, before the presidential campaign had even begun. Apparently he did not read the entire report of the poll, merely a , published in a Washington Post editorial. Much of the full report contradicted his conclusions. Moreover, anyone who believes that Iranians today will reveal their real electoral preferences to a pollster calling from Turkey probably responds to emails from Nigerian princes.

In Wednesday’s New York Times, the Leveretts—Flynt and his wife Hillary Mann—were at it again. As the title of the piece suggests, they take on the mantle of prophets and predict: “Another Iranian Revolution? Not Likely.” They claim that they know that “much of Iranian society was upset by protesters using a sacred day to make a political statement.” They seem to have forgotten that the 1979 revolution was made precisely by using sacred days for political ends. They claim to know that the opposition in Iran “do[es] not represent anything close to a majority.” Yet even if we take the regime’s own figures, 14 million people voted for the opposition. They dismiss this opposition as articulating nothing but “inchoate discontent.”

Crucially, they also suggest that the Obama administration should forget about the Green Movement and conduct business with the clerical regime as usual—the same regime that just declared that anyone who participates in a peaceful demonstration is an “enemy of God,” and will be dealt with accordingly, i.e. killed. In fact, pro-regime members of the parliament think that executing an “enemy of God” within ten days is too long to wait; they are rushing through a new law that mandates execution within five. This is hardly the behavior of a regime secure on its perch of power. To conduct “business as usual” with such a frightened and brutal government is no less egregious than overlooking the infamy of apartheid and continuing to do business with the South African regime.

To demonstrate the alleged weakness of the opposition, as opposed to the regime’s vigor, the Leveretts rely on images that they have gleaned from regime websites. Based on these highly partisan sources, they claim that the recent pro-regime demonstration was not only larger than recent opposition demonstrations, but also the largest since 1989. On so many levels this appears to be false. The regime brought out all government employees and school children, all Basij and IRGC families, and all who could be bused in from around the country. But instead of congregating in Azadi Square, where they have traditionally organized mass rallies to intimidate the opposition and the world, this time they chose a much smaller square in the middle of Tehran. There are satellite pictures of the regime demonstration having far, far fewer people there than at recent opposition rallies, which numbered in the millions. Even if the Leveretts’ numbers are accurate, comparisons between these demonstrations are absurd. Opposition demonstrations take place under the threat of beatings, imprisonment, and death—threats that are constantly broadcast on government-controlled media. One is tempted to adapt a Jack Nicholson’s quote from Prizzi’s Honor: “If they are so fucking popular, why are they so fucking frightened?”

The Leveretts play as fast and loose with the “facts” of the past as they do with those of today. Their portrayal of Khomeini as leader of the 1979 revolution is a good example. They claim that, in 1979, everyone knew where Khomeini stood, since he had written out his ideas before. But hundreds of documents from the U.S. and British government archives, as well as thousands of pages of scholarly writing, show that in fact Khomeini donned a democratic façade in 1978, which was far different from anything he had written in the past or would do in future.

In Paris, he promised democracy; in his writings, he advocated Velayat-e-Fagih, or the absolute rule of the jurist. In Paris, he promised that neither he nor any member of the clergy would have anything to do with power. Today, only the clergy, their relatives, and allies can assume any position of power. In Paris, he promised women would be free, and not forced to follow any new strictures; in practice, he not only forced the veil on all women, but also changed marriage laws so that a nine-year-old girl could be sent off to her “husband.” Today, after much struggle by the women’s movement, the marriage age for girls is 14. What is statutory rape here in America is the law of the land in Iran. In other words, Khomeini reneged on virtually every deal he made with the people. And that is why the regime he created has not seen a day’s peace for 30 years.

The Leveretts refer to “half-hearted efforts” by the Obama administration to establish ties with Iran. But the president of the United States has reportedly written two unsolicited and still unanswered letters to Khamenei; he has gone out of his way not to offer full support to the regime’s opponents; he has asked Congress to delay the passage of a bill authorizing new sanctions on the regime. All of this only to be rebuffed openly by Khamenei and ridiculed by his cohorts. In the meantime, the regime has continued its work on the nuclear program, increased its involvement in Yemen by supporting the Shia insurgency that weakens the central government and creates a vacuum for Al Qaeda, and increased its support to Afghan rebels through its proxies. For years, regime apologists in America have suggested that U.S. efforts to negotiate with Iran are half-hearted, or that all the clerics in Iran want is some respect. Events of the last seven months show the problem is not in Washington, but in Tehran, and with the nature of the regime. Khamenei knows that anti-Americanism is his raison d’etre.

After dozens of people have been executed and dozens more tortured to death, after thousands have been arrested by the regime and hundreds more exiled, and after millions have stepped into the street to shout their opposition to the regime, the Leveretts write of those who “talk so confidently about an ‘opposition,’” putting “opposition” in sardonic quotation marks. They then go on to ask, “What does this opposition want … who leads it … and through what process will this opposition displace the government in Tehran?”

Well, only a few days ago, Mousavi, the clear leader of the opposition, wrote a five-point proposal for ending the impasse, and no credible voice in the opposition has quarreled with his proposed approach. Thousands of students organized in virtual cells and in a non-hierarchical fashion constitute the vanguard of the movement. Mousavi and the opposition ask for the rule of law, for ending the police state, and for the legislature to do its job of holding Ahmadinejad accountable. The regime’s only response, aside from hurling insults and threats, has been to arrest more and more opposition figures and threaten demonstrators with execution.

As recently declassified documents from the British and American archives clearly indicate, even as late as December 1978, neither government knew whether the revolution would bring about a democratic government, a military coup, or even a communist take over. All they knew was that the status quo was untenable, so they began to distance themselves from the Shah and establish contacts with the opposition. Today, the status quo is equally untenable, but to demand an exact blueprint from the Iranian opposition is not only to demand the impossible, but to fall into the fallacy of historicism—the belief that History has iron laws that are predictable. When the U.S. supported dissidents in Russia, was there a blueprint? Is there one for Darfur? Policy is invariably made based not on an exact blueprint of the future but on a prudent assessment of ascending and descending forces in a situation, and hopefully, on moral values. The U.S. can either stand with the people of Iran, and support their quest for democracy—a democracy, incidentally, that offers the only solution to the nuclear problem as well—or it can side with those who defend the moribund regime. In the past, every time the United States has listened to the Leveretts of the day, it has reaped nothing but the wrath of the people and a loss of influence. The same would happen this time.

Originally published in The New Republic.

AUTHOR
Abbas Milani is a contributing editor of The New Republic and the Hamid and Christina Moghadam Director of Iranian Studies at Stanford, where he is the co-director of the Iran Democracy Project. His latest book is Eminent Persians: The Men and Women who Made Modern Iran, 1941-1979.