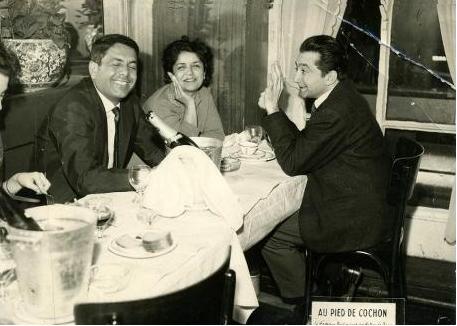 Filmmakers Farrokh Ghaffari and Ebrahim Golestan with his wife Fakhri in gallant company during their student days in Paris at the Famous Restaurant Le Pied de Cochon at Place des Halles. (Circa 1950’s/1960’s)

Farrokh Ghaffari who studied in Belgium and France in Grenoble and contributed as a film critic to the prestigious French film magazine Positif was to create Iran’s Cinemateque encouraged by French Film Critic Henri Langlois founder of the French Cinemateque. He then headed the International Arts and Film Festival of Shiraz during the 1970’s before being ridden from Iran by the Islamic Revolution.

Ebrahim Golestan became a famous filmmaker in his own right and is the father of the late photographer  Kaveh Golestan. He currently lives in Sussex Great Britain.