Cartoon: Why censorship in the Green Movement? 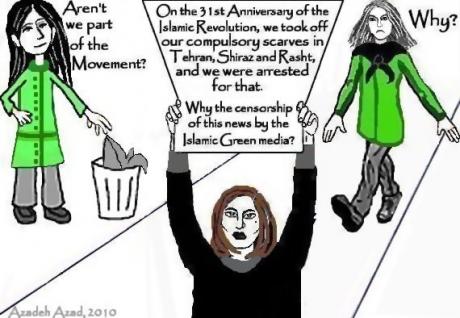 On February 11, 2010, many Iranian women in Shiraz, Rasht and Tehran (in Vali-Asr Square and Aria-Shahr district) took off their compulsory Hijab to protest the Dictatorship of the Mullahs. Although they were beaten and arrested by the IRI’s thugs,  the websites of the Green Movement refused to diffuse this important news or pay attention to this apect of the women’s struggle for their freedom as part of the Green Movement. The so-called Islamist feminists (sic) were discouraging women from engaging in this type of action as well.

For how long are the secular women going to be led by the religious groups of this movement?