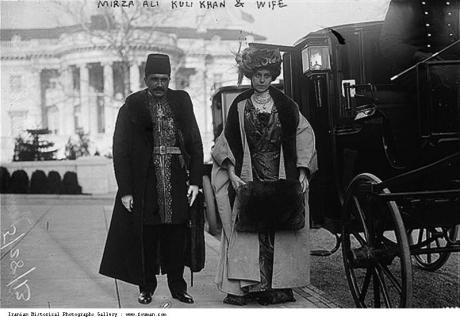 Political relations between Persia and the United States began when the Shah of Persia, Nassereddin Shah Qajar, officially dispatched Persia’s first ambassador, Mirza Abolhasan Shirazi, to Washington D.C. in 1856. In 1883, Samuel Benjamin was appointed by the United States as the first official diplomatic envoy to Iran, however; Ambassadorial relations were not established until 1944.

The first Persian Ambassador to The United States of America was Mirza Albohassan Khan Ilchi Kabir. Even before political relations, since the early to mid 1880s, Americans had been traveling to Iran. Justin Perkins and Asahel Grant were the first missionaries to be dispatched to Persia in 1834 via the American Board of Commissioners for Foreign Missions.

The third Majlis term started on Dec, 6, 1914. But its life was short and did not last more than a year. During the World War I, Iran declared neutrality. Iran’s neutrality was disrespected by foreign occupation forces that invaded Iran. Russian occupation army which sought such an opportunity reached Qazvin in no time.
Ahmad Shah was undecided in relocating the capital when Russian armies were advancing towards Tehran. This raised concerns and led to riots. Afraid of Russian atrocities, people were running for their lives. A number of representatives fled to Qom and Kermanshah.
Majlis sessions could not be held due to lack of representatives and finally adjourned on Nov, 12, 1915.

A fictionalized account of the first-ever Iranian ambassador to the United States. Sent by the Qajars, Haji “Washington” must deal with an inept translator, dwindling funds, a lack of recognition from other dignitaries, and constantly being mistaken for the Ottoman embassy all while trying to represent his homeland and establish a link to “the new world.” Produced by Forouzan Films