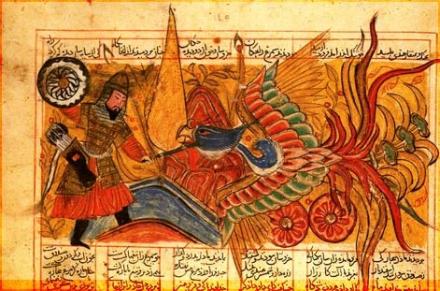 So you think Ferdowsi wrote the Shahnameh that is on your coffee table? Well, yes and no. No one knows what happened to Ferdowsi’s original manuscript. We can read the work today because copies were copied from copies by hand in the dim light of oil lamps by scribes who couldn’t read each other’s handwriting. Maybe some of the scribes waxed poetic and thought they could improve on Ferdowsi. A few centuries later the printing press came along and the manuscripts became books, fancy re-prints of which found their way to your coffee table. The result is as follows:

“A” is from my coffee table. “B” is from a 12th-13th century AD manuscript discovered just five years ago in Beirut. Actually I like “A” better, but I still wouldn’t want someone swapping my baby in the hospital nursery, even if I get a better baby in the deal. To protect our heritage, we need to know which heritage is really ours. The original Ferdowsi verses can only be known after experts compare as many versions as they can get their hands on. This is why the Beirut find is so exciting. It gives us more clues to help us nail down the original Shahnameh.

This manuscript is particularly valuable because there are indications that it is closer to the original than other manuscripts that have volunteer verses. For example, in my coffee table Shahnameh there’s a forward in verse that praises, Abu Bakr, Omar, and Osman. Now I thought Ferdowsi was a Shiite! Those verses don’t belong; someone put them there for political, religious or monetary reasons. You see, it’s not just about some scribe changing verses in a moment of inspiration; someone with an agenda deliberately tried to change our history.

Dr. Mahmood Omidsalar is one of the scholars working on the Beirut manuscript. Thanks to experts like him our literature and history stay true to the original as much as possible. When I first contacted Omidsalar about the find, I expected to discuss the air-conditioned underground vaults where such fragile cultural treasures are stored. But reality is far from what the Dan Brown book Angels and Demons had led me to believe. The Beirut library doesn’t have the wealth of the Vatican library. The old Shahnameh is now kept in a cardboard box, albeit a special acid free one. But over the centuries it has suffered some minor water and insect damage. Worse yet, it is at the mercy of Hezbollah or Israel, or whoever starts the next war in Lebanon.

I asked Omidsalar if he and the other scholars involved in the project are getting help from Iran. Before we start complaining about how the Iranian government doesn’t care about preserving Iran’s national heritage, let me say that the level of financial support from diaspora Iranians has also been low. Part of the reason is that Omidsalar and his colleagues don’t want any strings attached to the help.

In fact I touched a nerve when I asked Omidsalar how we could help. He wrote back, “I don’t mind you or any other well-meaning Persian’s help, and fully appreciate your offer. But I also want this understood up front that I WILL NOT ALLOW this project to be used for political purposes. This is a purely scholarly project that is focused on one and only one goal: The preservation of our literary heritage as found in Persian manuscripts… Professor Afshar [another collaborator in the project] and I are two old cranky students of texts with very short fuses, and don’t want any political involvements.”

There you have it! Some organizations in the diaspora opposition tend to value the Shahnameh as a political weapon with which to combat the IRI. To some of us heritage is ammunition. Whereas Omidsalar who has married his life to the Shahnameh for love is loathe to get into the political armaments business, his short fuse not withstanding.

At first my ideals seemed at odds with Omidsalar’s apolitical attitude. Shouldn’t we use every means available, cultural or otherwise, to advance our good causes? But on careful review, the answer is “no, there’s a limit.” If academic objectivity is allowed to lapse into catering to current event interests, centuries down the line our descendents may find Chicken McNuggets Ò verses in Rostam va Sohrab. This is an exaggeration, but recall the false verses praising Shiism’s rival caliphs, and also that in a small way Ferdowsi himself changed his work to please the ruling order. When Soltan Mahmood came to the power, the poet modified the final verses to re-dedicate the Shanameh to the new king.

To keep history honest and to rescue a part of this truth from becoming a war casualty in the Middle East conflict, a small group of aficionados has come together and chipped in under the name of FRM (The Foundation for the Preservation, Distribution, and Critique of Rare Manuscripts). Also the Farhang Foundation and Mr. Farhad Shah-Hosseini have made sizeable contributions towards publishing the Beirut Shahnameh in photographic form. Experts in Iran have likewise been crucially helpful by volunteering a lot of their time.

As for me, I was going to buy Dan Brown’s latest novel The Lost Symbol, but decided I would wait for the movie to come out. Instead I’m donating the $17.97 book price so Dr. Omidsalar and his colleagues can publish the Beirut manuscript. Here’s the site where you can contribute.