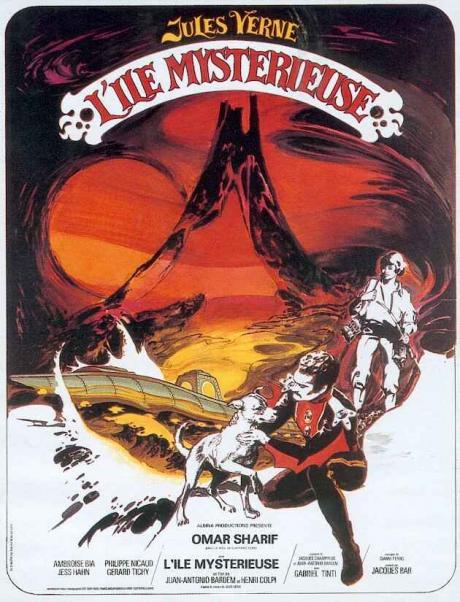 The Mysterious Island of Captain Nemo, a 1972/73 French/Spanish/Italian co-production Starring Omar Sharif who Starred in the film only  to pay off his gambling debts. But the series is arguably the ultimate cult TV-series and the most faithful adaptation of the classic Jules Verne novel to date. Enjoy …

This video is the whole series condensed into 7 minutes ( In spanish):

The Mysterious Island of Captain Nemo, a 1972/73 French/Spanish/Italian co-production,  is arguably the ultimate cult TV-series and the most faithful adaptation of the classic Jules Verne novel to date. Sure, the Ray Harryhausen adaptation is cool in it’s own way, but has precious little to do with the source material.

To a lot of people all over the world, including countries as diverse as Peru, Iceland and Egypt, the series represents a happy childhood memory. Most remember it only vaguely, though: Omar Sharif as Captain Nemo, futuristic ray guns, evil pirates, Jules Verne, exciting adventure etc. But what exactly was it and where did it go?

For decades fans all over the world hunted whatever video copies we could locate, trying to piece together a complete version. There were numerous variant prints of the truncated feature version on home video as well as Super-8 –  and even tantalizing rumours of a complete French tape set (which turned out to be true – well, more or less). And of course posters, programmes, lobby cards, soundtracks etc. I should know, because over the years I bought a lot of that stuff 🙂

But now, astonishingly, the search is over. I originally uploaded this web page as a tribute to a forgotten TV-series, hoping to attract fellow fans and with their help track down the elusive episodes. A Don Quixotically quest it seemed at that time. Recent developments have changed the situation completely though. Once so rare that it barely existed, The Mysterious Island of Captain Nemo is finally available to the world in the DVD format. Read on!   – Henrik Larsen