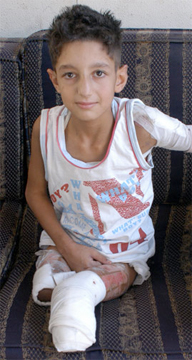 Dead people, No names, No feelings, Not even a coffin, In which to bury, The bodies.
A rotting carcass,
Of cadavers, Stinking flesh, Lying on the ground, The remains of a dog, Another with that of a human frame, But, really now… who cares, What’s the difference, Each of them, Every single one, An errant piece of flesh, Crow bait, Dead meat, An assortment of loosened bones, Bloodied guts, Carrion… food, For vermin… bugs, rats, vultures, A dog, Looking for a quick snack, Something like, A McDonalds for “an animal on the run.”
Yet, onlookers gag, As bodies rot, A fetid, Maggot-infested,
Heap of humanity, Right next to, An apartment building, Where seventeen,
Families once lived.
Cadavers, Spread all over, An entire city, Dismantled, Laid to waste, Destroyed, By “smart bombs,” Missiles, With the crippled mind, Of a crazed assassin.
Dead bodies, Sprinkled here and there, Like rain drops, Flush with blood, Feeding the earth, Giving birth, To dead trees…headstones, Neatly scattered across, A barren, fruitless fleck of land, A planned community, A cemetery, For souls without a home.

Another batch of dead bodies, That few seem to recognize, Nor even care about.
Unless, Of course, The corpse,
Had been blessed,
By having been,
Made in America,
The land of,
A superior race,
Of beings,
Who happen,
To believe,
In Yahweh, The United States Military,
And capitalism,
The free enterprise system.

The death, Of another, American soldier, One given,
A twenty-one gun salute, His remains properly boxed, And draped in red, white, and blue, Each combatant,
Numbered,
With his face,
Paraded on television,
For each,
And everyone to see.
The honored death,
Of another patriot, A Christian martyr, A hard-working dad, A loving mother, A caring friend, A beloved son, The great, And rather,
Grand passing, Of another, American hero!