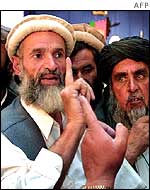 This Week, Hamid Karzai the David Kopperfield of Kabul, suddenly announced a Jirga, or tribal meeting to discuss Afghanistan’s “priorities”. This backward step precisely illustrates why the term “Quagmire” needs to be dusted off the shelf and put on sale and haggled over in the Bizarre of the region.

Since 15oo BC the Afghans have been subject to and trapped by this kind of Jirga Tribalist system. Tribalism in Afghanistan today is precisely why that country cannot seem to right itself, and take it’s place among civilized nations.

Tribes by their very nature are obstinate, independent, and resist ANY form of combination. Especially with other tribes! After all this is why they decided to form their own tribes.

In the past Jirgas, attempts to unify the tribes under a King or Emir or even a President such as Karzai attempted in 2002, have all failed within a few years. This is due to the very independent nature of the Tribal system. Add to that the fiercer independent and obstinate stubborn streak of the average Afghan, with a quick temper and tendency towards violence, with the ready availability of automatic and rocket propelled weapons, and you’ve got yourself quite a cocktail.

All this makes the presence and existence of a group like the Taliban all the more natural and obvious. Add to it that the word Taliban or as it is correctly pronounced, Taa-leban, which comes from the root Taa-leb means “someone who feels he is owed something” (as in Talab-kar) or “someone who wishes to stake a claim”, and not “seeker” or “student” as has been so soft-advertised by the Arab-English press.

Tribalism in Afghanistan is responsible for the worst of that country (not to mention their clothes!), rather than the best, highlighted by a Western media eager to at once illustrate the outrageous behaviors, while at the same time, defending the practices as quaint and charming. The Burqa and the institutionalized prohibition of women in society and education, 97% of the world’s Heroin traffic, and a general bad attitude, only a few of the unfortunate outcomes of this disease. A bacterial infection really.

This week’s announcement by the Krafty Karzai, trying to establish his illegitimate power over the tribes by calling a Jirga as if he is the leader, therefore only insures that outdated modes of using so-called “cultural traditions” like this upcoming Jirga, that the UN is so fond of condemning the 3rd world to, will instill and reinforce the trap that Afghanistan has found itself struggling in since inception, around the same Aryan migration, we evolved out of.

How sad to see a people with such beauty and potential, trapped by their own unwillingness to shed their bad habit (and worse outfits!), continually slamming headlong into this wall of such ill-feigned cultural “richness and tradition”.

As has been asked many times, where is the Marshall Plan for all of this? In post WWII Japan, after the infamous brutality of the Tokyo Bombing Raids, floowed by no less than 2 nukes (after Japan surrendered?), the US invaded and occupied and administered Japan by a military commander for 12 years! At the end, Japan loves baseball and comics and Sony’s work with 110. Even Japan’s auto industry has mimicked the US, churning out affordable, unreliable, and incredibly boring cars!

With Karzai’s continued Kowardice, and the inability of the tribes to stop their behavior, the US should follow it’s own lead in Japan, and be done with it. Everyone, especially the Afghan people will be far better off with the tribes de-clawed. And only Americans love their pets as much as they love their own family.