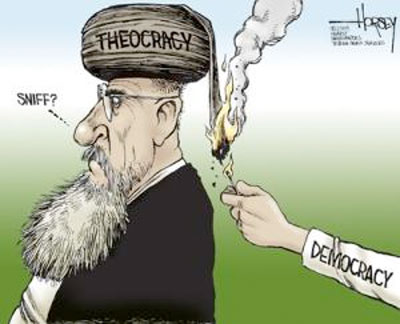 Since my involvement with the Iran issue – both as a journalist and a human rights activist – I had rarely had the opportunity to hear the Iranian-American side of the story. This was changed on April 17 when I participated in the New Generation, New Perspectives, New Media Forum hosted by Columbia University. While, for many, the forum was a unique opportunity to get informed about Iran and the current situation, for me it brought about a revelation that proved both enlightening and worrying.

Many of the speakers at the forum expressed a sentiment unique to the Iranian community: “We may live in the West, but our hearts are in Iran.” This is precisely the reason Iranian-Americans are suffering from the ABCD-dilemma. A few years ago, I watched a very enlightening movie about Indian-Americans being emotionally divided between their homeland and their adoptive country. The movie was aptly named “American Born Confused Deshi,” deshi being a Hindi word for someone from India.

Some of the Iranian-Americans I met in the forum are not American-born. They grew up in Iran and have moved to the US in the past decade or so. And the same goes for many Iranians that I’ve met outside the forum. The sentiment is almost universal. They don’t really feel like they can break ties with Iran and refuse to use their power as Americans to sway American politics and at the same time, don’t feel like they can dictate what Iranians do inside Iran.

The best example of this is that whenever an Iranian calls for protests inside Iran and they are not within the country, other folks jump almost instantaneously with the cry, “No interference!” Well, how could this be interference if it is coming from an Iranian? This is where the roots problem lie.

The Iranian Diaspora has so far led a very symbolic and largely ineffective role in what is happening in their country because of these self-imposed restraints. True, there were many protests in the few months after the June 12 election. However, thus far there are very few PACs, lobbying groups and such to work to promote the cause for Iran’s democratization. Furthermore, few intellectuals are willing to openly come out and declare their support for the Green Movement.

And let’s not underestimate the power of political involvement. Israelis and Jews – many of them having an emotional bond with Israel – have worked successfully over the years to promote the cause of Israel. They have been so effective that some have created conspiracy theories to delegitimize their success or somehow stain it. The truth is, the citizens of another nation can be both American and at the same time help their country in a way that it does not harm the national interests of the United States.

Israel is perhaps he the most prominent example, but there are Cuban-Americans, Mexican-Americans, Armenian-Americans and several other nationalities who have managed to sway US foreign policy to help their brethren. Why Iranians have not been able to do so is unfortunate.

At a time when the Green Movement in Iran needs support from the Iranian Diaspora, it is almost absent. With the exception of the National Iranian-American Council, which does not openly support the Green Movement, there is scarcely anyone to represent the Green Movement in the US or abroad. Iranian Nobel Prize-laureate Shirin Ebadi has been making the rounds in Europe and the US to shore up support, but her work is humanitarian in nature.

What the Green Movement urgently needs from the Iranian Diaspora, especially in the United States, is to come together and form a strong voice of political support for the cause of Iran’s democratization – if not outright liberalization. This is especially important since the Iranian government allegedly already has several organizations rooting for it clandestinely.

At the same time, a united Iranian Diaspora could serve well as a communicator of the wishes of the Iranian people. So far, what the Green Movement wants has been muddied by the fact that it has largely remained leaderless. While Iranians in the West cannot substitute that, they can certainly join hands to give them a clear voice abroad at least.

While monarchists, communists, leftists, liberals, conservatives and just ‘confused’ Iranians bicker and disagree, time is running out. Whether they get together or not is their choice. But if they do not choose to forgo their differences and create a single voice for of Iran’s democratization, Iran’s cause abroad would remain voiceless.

A democratic and free Iran is also going to help the security of the West and speed up the democratization of the Middle East – something everyone living in the West wishes – even if that’s not what some politicians want. It is time to make sure that the voice you have is heard. It is time for Iran as well as your country of residence to see you in action.