Making of an Iranian Chalabi 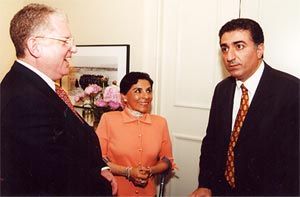 Prague Democracy and Security conference and Nomination of Reza Pahlavi as Iranian Chalabi.

On March 5, 2001 in an article written with Pennsylvania State business professor Fariborz Ghadar, he advocated a number of the policies that have since been carried out by the US, including containing the Taleban and Saddam Hoseyn. He also notes that supporting a secularisation of Iran would lead to easier transport of Caspian oil through Iranian territory.
Well before Professor Ghadar published his report, the foundation of move on regime change was being poured by Neoconservative and AIPAC.

Making of an Iranian Chalabi:

“The form of government would be a Constitutional Monarchy, with the Head of State being Reza Pahlavi, son of the former Shah, Mohammad Reza Pahlavi, who was deposed in the 1978-79 Islamic revolution, and Sohrab Sobhani as his Prime Minister”, Mr. Beeman wrote.

“The Bush Administration apparently has a handpicked American “plumber” ready to go in Iran, much like Ahmed Chalabi (the leader of the Defence Department-backed Iraqi National Congress) in Iraq. This is Sohrab “Rob” Sobhani, an Iranian-American associated with the neoconservatives in Washington. With Reza Pahlavi as Shah, the 40-ish Sobhani would presumably be prime minister or president”, he prognosticated.

As in his previous article published by the Beirut-based The Daily Star, (see IPS’s “America’s Case Against Iran Is Full Of Holes”), the scholar names Mr. Michael Ledeen, a tough-tongue historian and journalist as the “promoter” of the “Restore Monarchy” project.

“The promoter of the Administration policy is American Enterprise Institute Freedom Chair Holder Michael Ledeen, who has written and lectured obsessively about regime change in Iran. Ledeen was reported by The Washington Post to be one of four advisers in regular consultation with White House strategist, Karl Rove”, Mr. Beeman said, adding that Ledeen and Sobhani recently established the Coalition for Democracy in Iran (CDI) to promote this regime change.

Sobhani’s interests in regime change are very clear and very consonant with American desires. They are largely commercial. Following his graduation from Georgetown, he became head of a Caspian Energy Consulting, a firm dealing with the transport and sale of Caspian oil.

Ledeen, Sobhani and Morris Amitay, former director of the principal Israeli lobbying group, the American Israel Public Affairs Committee (AIPAC) joined forces at the American Enterprise Institute in a seminar entitled The Future of Iran, in which they called for regime change. AIPAC has indicated support for the restoration of Reza Pahlavi to the throne, although they wish to remain in the background, as reported by Mark Perelman on 16 May in The New York Jewish Daily Forward.

A strong Israeli connection was apparent here. According to Perelman, Pahlavi has had direct contacts with the Israeli leadership: “During the last two years … [Pahlavi] has met privately with Prime Minister Sharon and former prime minister Benjamin Netanyahu, as well as Israel’s Iranian-born president, Moshe Katsav.”

Fast Foreword to 2007 and Prague Democracy and Security conference.

[A closer look at the participants list at the Prague Democracy and Security conference that was the subject of my last post discloses some intriguing associations that I had not noticed at first glance but which may warrant additional attention. Not only was the gathering a kind of “Neo-Conservative International” and the corridor chatter all about Iran, as Anne Bayefsky reported in the National Review Online, but some of the participants appear to be institutionally inter-related in ways that I had not anticipated.

First, focused as I am on U.S. foreign policy, I failed to note the presence of a couple of people who should have been further identified; namely, Richard Dearlove, who, as head of Britain’s MI6 (2001-2004), purportedly authored the infamous “Downing Street Memo” and, after his retirement, joined the Henry Jackson Society, a mainly British version of the Project for the New American Century (PNAC); and Uzi Arad, currently the director of Israel’s Institute for Policy and Strategy, who served as Binyamin Netanyahu’s top foreign policy adviser when he was prime minister.

But these two, like the American Enterprise Institute’s (AEI) Richard Perle, are relatively well known, as, of course, were other participants I noted in the last post, including the other four members of the AEI delegation, Karen Hughes, Reza Pahlavi, and the conference convenors — former Czech President Vaclav Havel, former Spanish Prime Minister Jose Maria Aznar, and Natan Sharansky, the former Soviet dissident and Likud minister who broke with Ariel Sharon over his disengagement from Gaza and who now heads the Adelson Institute of the Shalem Center, a Likudist think tank close to Netanyahu.]

http://www.rightweb.irc-online.org/profile/Coaliti…
http://www.sott.net/articles/show/187564-Washingto…
The Daily Star published this article on its 2 June issue