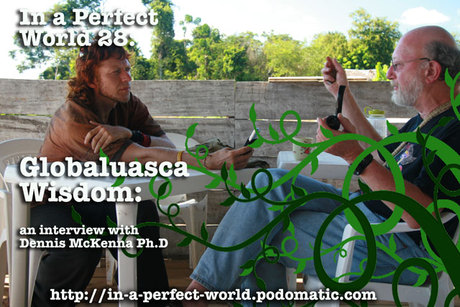 A seminal interview with Dennis McKenna, Ph.D on the evolution of
ayahuasca and the entheogenic movement and the imminent tipping point on
planet earth the movement parallels. In which experiential journalist
Rak Razam quizzes Dennis on his role as a scientist and a leading
ayahuasca researcher, while Dennis waxes lyrical on bio-piracy, the
proliferating business of shamanism in Peru and around the world, and
the urgent need for integration of the plant teacher experience in
people’s everyday lives to truly make a difference. Is the sacrament of
ayahuasca becoming commercialized? As pharmahuasca – and the startling
development of ayahuasca in a pill form – spreads beyond the vine
itself, is the wisdom of globaluasca transcending its Gaian roots to
connect with a new generation without the plant dogma? Is the future a
religious, compartmentalized Entheogenic Evangelism? Or will lodges
transform into “psychedelic monasteries” training plant Jedis? Its been
ten years now since Dennis’ brother Terence passed on, and Dennis
deconstructs some of his theories, from Timewave Zero to the
Singularity and provides a critical analysis of the 2012 phenomenon and
the unfolding Archaic Revival…