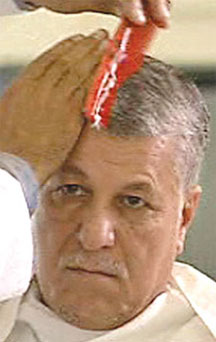 Almost a year has passed since Iran’s controversial presidential elections last June. The angry street fights that started last summer between Iranian security forces and civilians over whether Mahmoud Ahmadinejad had won or lost the election have since turned into rage against the previously untouchable Ayatollah Ali Khamenei, the Supreme Leader no one had ever before dared to publicly question or debate. By throwing himself into the middle of the country’s deep political conflict to favor Mahmoud Ahmadinejad, Ayatollah Khamenei has sparked a new confrontation with the Iranian people–particularly the youth–that has made them shift the focus of their allegations of fraud from President Ahmadinejad to the Supreme Leader.

Ayatollah Khamenei’s “new face” and stubborn unwillingness to moderate his support for Mr. Ahmadinejad for the sake of the country’s nuclear program is moving the future of Iran towards a dangerous direction of confrontation that has prompted members of the opposition and prominent conservatives–most notably Mir Hossein Mousavi, Mehdi Karroubi and Ali Akbar Hashemi Rafsanjani–to temper their public accusations of election fraud and alter their strategy to bring about governmental reform.

Former president Khatami and other key “Reformist” leaders have thus become more quiet, toning down complaints about the contested presidential elections, because they recognize a serious threat facing the nation. They are deeply aware that if Iran is dragged into a military confrontation with the international community, the first victims of any foreign onslaught will be the Reformists themselves, who could be designated as “foreign elements” by the Iranian Revolutionary Guards Corps and eliminated from the ruling system.

Averting the possibility of an external military threat against the nation will require a mediation of internal power within the Islamic Republic’s governing elite, and former President Rafsanjani will emerge as the key power player to broker a domestic agreement.

It has long been known that Ayatollah Khamenei has had to rely on powerful domestic political players to garner legitimacy in the eyes of the Iranian population and clergy. Initially unknown to the founder of Iran’s revolution, Ayatollah Ruhollah Khomeini, Mr. Khamenei was allowed to become a significant player in Iran’s post-revolutionary government only after Mr. Rafsanjani contacted Mr. Khomeini in Paris and asked him for permission to accept Mr. Khamenei’s membership in the country’s newly formed “Revolution’s Association,” according to the Mr. Rafsanjani’s memoir.

This unknown black-turbaned man–famously passionate about poetry and music– went on to become president of Iran’s revolutionary government, and then succeeded Ayatollah Khomeini as the supreme leader of Iran, thanks to the efforts of Mr. Rafsanjani and Ruhollah Khomeini’s son, Ahmad, who lobbied for his succession.

As supreme leader of the Islamic Republic, Ayatollah Khamenei has rarely expressed a direct opinion or adopted a clear stance on state policy. While his actual interests and thoughts have been typically known by the population at large, they were always understood through cryptic allusions. The supreme leader’s speeches at important events were always uncertain, and as one of his followers once said, could only be understood by those with “special skills” to read between the lines of the Ayatollah’s phrases. The purpose of addressing issues this way was to avoid having to publicly take sides, and thus absolve himself of responsibility for specific decisions.

But this game of hide and seek came to end and Mr. Khamenei’s cover was blown. He finally succumbed to the deafening chants of protesters after the June elections calling for President Ahmadinejad’s resignation, and made a public opinion. Seven days after Iran’s contested presidential elections, Ayatollah Khamenei openly threatened demonstrators during his historic Friday prayer speech, forbidding any more demonstrations against the election results and making his de-facto support for state suppression starkly clear.

The following day was the bloodiest in Tehran’s history, with more than 70 people killed, according to opposition leaders, Mir Hossin Mossavi and Mehdi Karobi. And it was on that day that a young girl–Neda Agha Soltan–was shot in the chest by a sniper from the supreme leader’s loyal militia. The true “face” of Iran’s supreme leader was revealed when he publicly stood with the Iranian president to keep him in power no matter what the price.

This completely new and different image of Ayatollah Khamenei, who since the inception of the Islamic Republic has veiled himself under a cover of spirituality and individuality to stand above political affairs, has shocked the nation. By designating millions of Iranian citizens as agitators, combatant enemies and foreign elements, he has made clear just how removed he is from the reality of what is going on in Iranian society. His credentials and ability to effectively rule are being questioned by different political groups and parties within the country, prompting rumors that he may even be discharged because of his misjudgment and unwillingness to compromise.

And so the question must be asked: why does Mr. Khamenei want so much to keep President Ahmadinejad in power even if it means his own popularity will suffer? What makes them so close to one another when it is Mr. Ahmadinejad himself who is the reason for Ayatollah Khamenei’s decline?

What is cementing the supreme leader with the Iranian president and the country’s Revolutionary Guard Corps is Iran’s nuclear program. All three of these players seek the same goal: to mastermind and attain nuclear technology no matter what the consequences of doing so means for Iran. For Ayatollah Khamenei, Mr. Ahmadinejad is the only president at this critical point who can be totally depended on to not negotiate with foreign powers over the Islamic Republic’s nuclear energy program.

At the same time, the Iranian president’s influence on the Arab street and his famous anti-Israel rhetoric are attributes that Mr. Khanemei can depend on to bolster Iran’s position in the case of a foreign military attack.

Mr. Khamenei’s lack of senior religious qualifications has earned him a generally low opinion among the country’s senior theologians in Qom. Because the supreme leader never had a strong support base in the holy city, he has throughout the last twenty years invested in the Revolutionary Guards and Basij militia to protect and guarantee his power.
And so, when Basij militia attacked civilians during Iran’s post-election protests, many senior clerics issued fatwas against the way system used against protesters.

What scares much of Iran’s senior clergy today is the possibility that Iran may ultimately be dragged by Mr. Khamenei into an unwanted war over the leader’s nuclear ambitions. An alternative scenario that is also widely feared is that if enfeebled, Ayatollah Khamenei may eventually allow the transformation of the current government–which has been vastly anti-clerical and cracked down on popular demands for transparent elections and democracy–into a militarized system. And in the face of a military threat, Iran’s clerics know that the current supreme leader does not have the popularity or influence that the late Ayatollah Khomeini had to unify the nation in the case of an attack.

Perhaps the country’s reformists have concluded that at this critical time, Iran needs peace in its internal political scene in order to slowly distance itself from the threat of war and mollify international discord over its nuclear affairs. For them, it is clear that it is only because Mr. Ahmadinejad serves the supreme leader’s nuclear ambitions that he has been able to stay in power. Once this threat has passed, Ayatollah Khamenei will have no choice but to stop supporting Ahmadinejad.

Former president Rafsanjani has emerged as the last powerful member of the clergy to remain shoulder to shoulder with Ayatollah Khamenei, and is the last hope for moderates, reformists and even conservatives in Qom to “rescue” the republic from the hands of the Revolutionary Guards and the Basij militia.

The upcoming anniversary of the presidential election in June has the Iranian government preoccupied with the possibility of a new round of sanctions and preparing for a potential military confrontation.

Not only are the eyes of Iran’s clerical establishment in Qom and Iranians once again turning towards Mr. Rafsanjani, but even the world is waiting to see if he can solve the problem peacefully.

AUTHOR
Camelia Entekhabi-Fard is a journalist, poet, and writer who grew up during the Iranian Revolution.