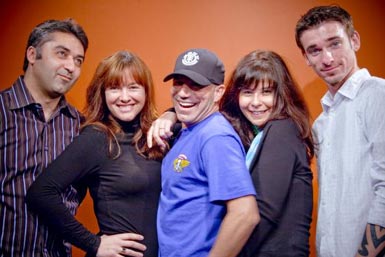 Hooman Khalili our local Iranian-American member of the Alice Radio Sarah and Vinnie Morning show (97.3 FM in San Francisco), with a drive-in audience of over 450,000, and a hefty presence on YouTube, Facebook and Twitter, has just announced that he would like to starting a new feature on the show called “GOOD NEWS FROM IRAN. . .” in which he will read and discuss positive and uplifting human interest stories about Iran.

“Everyday all we hear in the United States is how bad everything is in Iran. I’m sick of it. Never do we hear about the good things that come out of Iran, rarely do we hear about the Persians [around] the world that are making a positive impact. I am going to change that. Everyday I am going to report one good story from Iran or one good story about a Persian in the world that is making a positive change.”

To collect the stories and news that he will read on the air, Hooman has created a special email address. Send your stories or ideas to:  GoodPersianNews@gmail.com

At a time when the mainstream media appears to
only want to do negative or demonizing stories about Iran, I think that Hooman’s idea is ultimately worthwhile. The fact is that American Neo-Cons’ thirst for war with Iran is at an all time high. It also does not help matters when Iran’s own neo-cons are actively seeking their very own doomsday machine with which to “negotiate” their continued ruthless rule.

But maybe, just maybe, with Hooman’s command of the air and sound waves, if we can all focus on the positive aspects of our collective existences, maybe a 3rd alternative can be found. One in which active positive change actually happens (on both sides), and no one has to die over it.