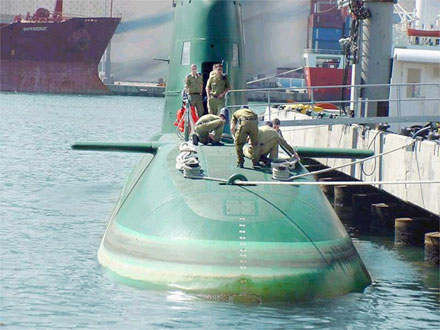 The Sunday Times carried an article last week entitled “Israel Stations Nuclear Missile Subs off Iran” reported by Uzi Mahnaimi in Tel Aviv. Whether true or not does not surprise me when it comes to Israel. Its reckless past history and the recent bloody raid on six-ship flotilla aid to Gaza, killing nine and wounding dozens, supports the general opinion of a State who has enjoyed too much success with belligerence and bullying in Middle East with backing from Uncle Sam.

These are three German made submarines named Dolphia, Tekuma, and Leviathan. They each carry a crew of 35 to 50, can stay at sea about 50 days, submerge to a depth of 1,150 ft., and has a range of 1500 kilometer, meaning they are capable to reach any target in Iran. What they deliver is nuclear cruise missiles. It is said their purpose of being there is deterrent, gather intelligence and to land Mossad agents. When asked about the Iranian response, an Iranian Admiral said “anyone who wishes to do evil act in the Persian Gulf will receive a forceful response from us.”

First, “deterrent” to what? A recent assessment of Iran’s missile program and inventory by London based Institute for International Security Studies, revealed in a book “ Iran’s Ballistic Missile Capabilities …” that Iran is incapable of doing much damage to Israel if the Zionist State should ever attack the Islamic republic, and that Iran’s inventory of missiles are small, and inaccurate. (“Iran Missiles Militarily Useless, Iran-Times, 5/4/2010”) Therefore, they know that Iran is not a real threat to anyone in Middle East. Everything else you hear is hype for other purposes.

Second, Iran’s nuclear program has been overblown by the West far beyond any reasonable reality. Anyone with some knowledge of nuclear Physics & Chemistry will tell you the ability to enrich do not translate into ability to develop an atomic bomb with all its intricate complexities beyond Iran’s present technology. They can’t even fabricate a 20 percent nuclear rod for use in the Medical Isotope reactor. What the West really wants is to prevent Iran from gaining the knowledge of nuclear processes, even for energy production. Therefore, one must conclude that Iran still is a non-nuclear country.

Third, if true that Israel’s Nuclear Subs are operating off Iran’s waters, then one must question the audacity of a nuclear country threatening a Non-nuclear country with Nuclear Cruise Missiles. Isn’t that NPT violation and where is United Nations Security Council to prevent a mishap in such volatile region?

Fourth, where did Israel got their hand on nuclear cruise missiles? That is one high tech peace of beast. The answer to that is a no brainer.

Fifth, nuclear cruise missiles can be fired from anywhere. Why would Israel bring them under the foot of Iran? I question the wisdom of this move.

Sixth, if you are there to gather intelligence and land Mossad, then why would you advertise it in the world by passing information to a Tel Aviv reporter? The only reason you do that, to let the world know what you are up to. It’s like handing someone a box and tells him to open it. When he does, there is nothing in it. I believe Uzi is the stooge of Israeli propaganda. They put out this sort of things for intimidation, diversion and manipulation. All countries got one.