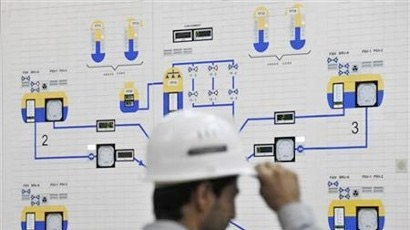 With the most recent round of UN-approved sanctions and seemingly more restrictive additional sanctions introduced by the European Union, Canada, Japan and Australia, there appears to be renewed interest in the effectiveness of sanctions in altering the behaviour of the Islamic Republic of Iran concerning the atomic energy programme of the regime and its real purpose. In this note, I try to explore some of the less often discussed but I hope not less appreciated possible effects of sanctions.

Stated expected effects, sanctions will raise the cost of developing industrial capacity as development of the energy sector in Iran.  Given that 80% of government’s budget and 70 percent of investment in industrial projects come from oil revenues which are under the monopoly of government and now significantly transferred in management to Islamic Guards, Sepah, sanctions will result in a fall in the revenue of government reducing its financial capability to pursue and complete its nuclear energy programme which is suspect of having the capacity to develop military potential for weaponization.  This line of analysis advocates that in light of a very ambitious long range missile programme which already has the assumed capability of delivering a load, be it very small in weight, to most of southern Europe, world community, in the interest of collective security should use sanctions to cause a substantial reduction in the income earning of the present leaders and their security force Sepah which in recent years has expanded its presence in the oil, gas and almost all layers of the economy.  Targeting of the four industries; energy, banking, transport and insurance are seen as weakening of the four pincers which Sepah had developed to complete the nuclear programme to its asserted militarized phase.

What we may see in reality, sanctions are likely to be used by Sepah as an opportunity to use the veil of foreign threat and national security to complete their grip on the economy and increase their revenues from their rent-seeking activities and at the same time displace their private sector competitors.  In reality, sanctions may be used to expand Sepah’s economic empire and its share of the economy. At the same time, sanctions if policed effectively will very quickly see a fall in the growth rate of the economy.  Combined with the poor management skills of Sepah, sanctions could push the Iranian economy into negative growth rate within 12-18 months.  Industrial production is estimated to decline by 15 percent while unemployment rising by as much as another 5-7 percent on top of the existing official 15 percent (22% unofficial).  In a young society where around 70% are under 30 years old, this could mean an unemployment rate of 35% amongst those enter the job market for the first time.

Sanctions are certain to increase cost of conducting trade to the economy, in this case by as much as 50% in some sectors.  In the Iranian economy where imports use 88% of oil revenues, a rise in the cost of trade will be transferred to higher domestic prices.  Those on fixed income, i.e. salaried and waged households will be most affected since they cannot adjust their prices, that is, the value of their labour accordingly.  An accelerating inflation rate is almost certain do deplete the last nuggets of savings of the middle classes and push a large segment into the low income category.

As sanctions have often shown to produce, health spending and education are amongst the first services which governments cut their budgets whilst increasing the resources available to the security and intelligent services.  Low income and middle income families are most dependent on the public sector provision of health and education services in Iran. It is more than likely that access and availability of these two basic services will be affected negatively.  Entitlement to basic health and education are crucial to the development of a healthy and

So, why sanctions are used? They are preferred now since they are aimed to deal with the rising influence of Sepah command that has been transferring massive segments of the economy under its ownership and encouraging the mushrooming of corruption and systemic implementation of rent-seeking behaviour in foreign trade and energy sectors and banking.  The rising financial power of Sepah is understood to have significant implications for the military and nuclear programmes approved by the leadership who wishes to see completion of control in the economy as well as over the politics of the country.  Going back to business-as-usual not only actually will make a mockery of human rights of the citizens inside Iran, but may also have serious consequences in dealing with future risks under a new power structure in Islamic republic of Iran.

Sanctions are and always will have a negative effect on the wellbeing of the citizens of the targeted country but sometimes, they can accelerate positive change and bring about transition to a more participatory policy making framework of governance.  They are the softest of the hard power tools or the hardest of the diplomatic language.  In this case, they are displacing military action against Iran and those who talk about positive engagement may wish to pause and think about the behaviour of the leadership in the last 12 months and even in last 13 years when the Supreme Leader has blocked any attempts to meaningful and lasting reform.  The dead end is one of the making of policies pursued by the leadership and is neither the wish of the West nor the citizens of Iran who wish to pursue a fruitful life and live in peace.