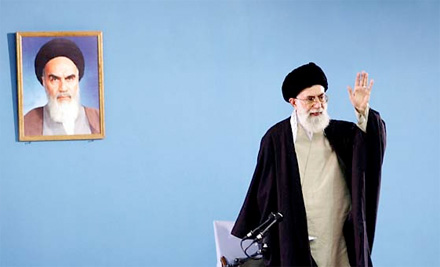 Since he stole the majority of the people’s votes in last year’s election, Iran’s Supreme Leader has also stolen for himself, or tried to, every other public occasion all through the year. Already by far the most powerful tyrant Iran has ever known, he demonstrated again and again, all year long, before the shocked eyes of the world to what unbelievably murderous and perverted lengths he will go not just to snuff out every last vestige of his people’s freedom – but to break their very spirit.

On the first anniversary of the stolen election he had his riot police and government toughs out in greater numbers than ever before to arrest and intimidate anyone who dared speak out. People largely kept off the streets. His forces quickly dispersed the very few, and very small, scattered protests.

This man tries to command Iran not with compassion and mercy but with fear and brute force. An impressive stone fort once similarly tried to command the Atlantic coast of Florida.

Backed against a trackless and impenetrable swamp, its massive walls and many cannons all faced the sea – making it impregnable. But it fell to a conquistador who slogged his men, in heavy armor, through the steamy and tangled swamp to attack from behind. Backed by his shallow misinterpretation of Islam, Iran’s Supreme Leader directs all the forces at his command to defend himself against his own people’s legitimate demands for fair play, compassion, and decency – and would seem on this first anniversary of the election to have won the day. In fact he has doomed himself to the fate of the fort. Had he not defended himself the way he did, he could never have been defeated. As it is now, nothing can possibly save him.

It’s only a matter of time before enough Iranians with Islamic compassion and mercy in their hearts come up from behind to expose him for the fraud he is. Against this, the willingness of his revolutionary guards and Basiji to assault the innocent people of Iran will not avail.