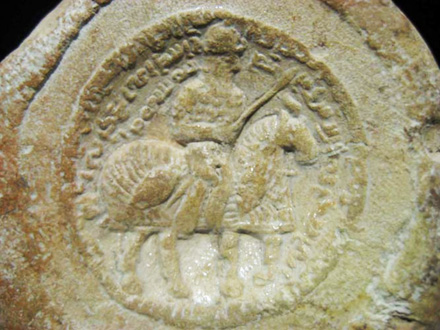 This article brings to light some ten Spāhbed bullae which are housed at the Barakat Gallery in London. Their provenance is unknown, but they are dominantly (seven) from the kust ī nēmrōz “Southeastern Quarter” of the Sasanian Empire. There is also a bulla from kust ī xwarōfrān “Southwestern Quarter,” another from the kust ī xwarāsān “Northeastern Quarter,” and a unique, mostly illegible and unpublished bulla among the collection as well. Before dealing with the Barakat collection it is important to provide a historiography of the study of the Spāhbed bullae and its significance for Sasanian history and civilization. [seal images]

The Study of Sasanian Spāhbeds
In 2001, R. Gyselen brought to light seal impressions that confirmed the literary evidence that the Sasanian Empire was militarily quadripartitioned in the sixth century CE. Prior to this, literary sources suggested that administratively, four chanceries (dīwāns) were created for the empire, a fact later confirmed by the numismatic evidence. In an important article, G. Gnoli suggested that there certainly was a military quadripartition as well, where Ērānšahr was placed under the control of four generals (spāhbeds). This was done as a reaction to the incursions from the four corners of the Sasanian Empire. However, according to him, this military reform was short lived, due to the political upheaval of the late Sasanian period, but its traces remained in the Arabic and Persian sources.

Initially there had been a single general, the Ērān-Spāhbed, who was in charge of the entire Sasanian military. The fifth century CE, however, had seen new pressures and invasions on the Sasanians from the east, causing the murder of at least one of their kings, Pērōz, by the Hephthalites (484 CE). This was combined with the Eastern Roman frontier wars in the west, and the Arab raids into the empire from the south. The nomadic incursion from the Caspian region and Darband was also another problem. All of these issues made it crucial for the empire to be able to deal with problems on several fronts. Consequently, four generals were placed in charge of each quarter or kust: 1) kust ī xwarāsān “Northeastern Quarter;” 2) kust ī xwarwarān / xwarōfrān “Southwestern Quarter;” 3) kust ī nēmrōz “Southeastern Quarter;” and 4) kust ī ādūrbādagān “Northwestern Quarter.” Interestingly, this division into four quarters resembles the divisions in the later Roman Empire, where there were Praefectura praetorio per Orientem “prefecture of the East;” Praefectura praetorio per Illyricum “prefecture of Greece and the Balkans;” Praefectura praetorio Illyrici, Italiae et Africae “prefecture of Illyrium, Italy and Latin Africa;” and Praefectura praetorio Galliarum “prefecture of Roman Britain and the Iberian Peninsula.” One can assume that by the sixth century and at the time of the reforms of Kawād and Khusro I, the office of Ērān-Spāhbed was done away with and his power were divided between four Spāhbeds.

The Middle Persian, Islamic and Armenian sources all suggest the quadripartion of the Sasanian Empire, and this reform is supported by modern scholars. There is certainly some inconsistency to be found in this division. Moses Xorenats‘i discussed such a scheme, but its exact division was contradicted by other literary sources. Xorenats‘i places Fārs and Sīstān in the k‘usti nemrog (Middle Persian kust ī nēmrōz), while Tha’alibī placed Sīstān in the quarter of the East, kust ī Xorāsān (Middle Persian kust ī xwarāsān), and Fārs in the kust ī nēmrōz. More recently T. Greenwood has given the seventh century description of the four division of the Sasanian Empire according to Anania of Širak, providing further evidence for the division. The reason for the differences may lie in the nature and time of the various reforms and divisions which begun at the time of Kawād and were continued till the late sixth century by Khusro I. We can certainly state that there was not only a military, but also an administrative and religious quadripartition as well, where the kust was under the control of a rad “spiritual master.”

There is also some numismatic evidence pointing out the military division of the Sasanian Empire from the time of Kawād I. The reverse side of Sasanian coins usually note the date when the coin was struck and the place or mint signature. There are some Sasanian and Arab-Sasanian mint signatures which have not been attributed for certain. Gurnet has proposed to read the Sasanian mint signature DYNAW which had been attributed to the city of Dēnāwar, as DYW-AO, along with three other signatures that have been found, DYW-AT, DYW-AS, and DWY-KR. In regard to DYW-AO, due to the confusing nature of the Middle Persian alphabet, a letter at times could be read several ways. The first three letters, DYW have been suggested to be the abbreviation for dīwān, thus Perso-Arabic dīwān, meaning “government office,” and the next two letters acting as suffixes for the region. Gurnet suggests AO for the southwest, AT standing for the quarter of northwest, perhaps standing for Ādūrbādagān; AS for the Capital, perhaps for Āsūrestān; and KR for the southeast, standing for Kermān. By identifying AO with the south west the scheme of the quadripartition becomes questionable, but the real question is what does AO stand for? Gurnet does not give a definitive answer to this anomaly, and indeed one can read the suffix as AN, thus DYWAN, but another suggestion may be more suitable. In Middle Persian, initial āleph can also be read as hēt and O is written with wāw, thus it can also be read as w. Here one can suggest the reading XW for Xwarāsān, thus DYWXW “Dīwān of Xwarāsān,” the northeast. These coins were minted during the reign of Kawād I, which exactly corresponds with the beginning of the administrative reforms.

Due to Gyselen’s work that the Spāhbed bullae, mainly based on the collection of A. Saeedi that have come to light in, and serve to confirm our late antique and medieval historians. As most of the evidence till now have come from the Saeedi collection, it is worth publishing new bullae evidence from another collection: That of Barakat gallery. The Spāhbed bullae published here is from an unknown provenance, but they probably originated from Iran or Iraq and are part of an important archive.

Commentary
It is important here to discuss some of our proposed readings of the legend on the bullae as compared to that of Gyselen. Gyselen, in her first publication of the bullae, read part of the sentence hujadag-khusrō wuzurg ērān āt kust ī nēmrōz spāhbed “(having the honorary title) “well-omened (is) Husraw,” grandee, Ērān-spāhbed of the side of the south.” We, however, are in agreement with her reassessment of the reading that hujadag “well-omened” referred to the ruler under whom the Spāhbed held office, and not to the Spāhbed himself. She also suggested “that the title of Ērān-Spāhbed remained in use despite the fourfold division of the of the origin duties of the Ērān-Spāhbed, who had authority over the entire empire.” While she holds to this idea, the translation of Ērān-Spāhbed is given as “Spāhbed of the Aryans.”

We would like to suggest that indeed with the reforms of Khusro I and the quadripartion of the Sasanian Empire, the office and title of Ērān-Spāhbed was discontinued, and that the reading of the legend on the bullae confirms this supposition, where we read as “Spāhbed of the Iranians.” Grammatically Ērān is separated from kust and nēmroz, as well as Spāhbed (with the izāfa). Thus this part of the legend should read as “Khusro, the grandee of Iranians, AT, the quarter of Southeast, General.”

There are still issues that are not resolved. The word āt which has been suggested by Gyselen to be a personal monogram, appearing on the cap of the Persian nobility. Lastly, we would like to mention the unique and unpublished bulla LO 1078. The bulla is the largest in circumference as compared to other bullae of the Spāhbeds. It is well preserved in regard to the details of the horse and general. However, the legend is badly damaged and only the proper name, Khusrō is legible on the first line. This unpublished bulla suggest a tenth general and perhaps more generals are to be located with further discoveries in Iran and Iraq and even beyond.