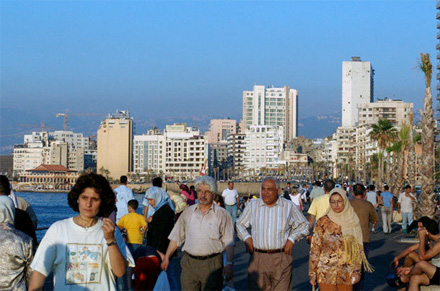 The great contemporary thinker, Homer Simpson, once gave his beloved son, Bart, three lessons to get him through life: “Number one: ‘Cover for me.’ Number two: ‘Oh, good idea, boss.’ Number three, ‘It was like that when I got here.’” Ignorance of these basic lessons has led to the loss of many opportunities in my life. Or, it has led to others taking them, according to a billboard I have seen repeatedly on my way to Beirut airport which says, ‘An opportunity is never lost; it’s always seized by someone else.’ To comfort myself, I have tried to think of opportunities I have lost when no one else was around to seize them. My hope has been that perhaps I could go back and claim such opportunities, but the consolation has been minimal. (By the way, I cannot remember what the ad was about – a common problem with very clever copy writing.)

Approaching the end of five years in Lebanon, my second long-term stay here since early 1970s, I would also like to share with you three other lessons I have learned in this wonderful country. Each of these can be interpreted in two ways, depending on one’s own motivations and attitudes in life: negative, irresponsible, and destructive; or positive, forward-looking and constructive.

The first lesson is derived from the title of this piece, ma bi’asser, literally meaning ‘it has no effect’, or ‘it makes no difference’, ‘it doesn’t matter’. The expression comes up in conversations all the time, resolving many a discussion or putting your mind at ease when you’re worried that things might not be going your way. Sometimes it means there is no point in worrying, because your worrying will ‘have no effect’. ma bi’asser can mean you don’t have to think about the consequences of your actions, because you have learned all along that no matter what you do, it will ‘have no effect’. Or it could be positive, protecting you against changes in the world outside, telling you that nothing should be allowed to change your course of action. Both interpretations could be seen at work in Lebanon.

You underpay the cashier at a supermarket, realize your mistake, pay the difference, and apologize. You are greeted with a smile and the words ma bi’asser. At another shop, or a restaurant, you keep changing your order, but the cheerful shop assistant or waiter does his/her job with a smile, assuring you that all the hassle ma bia’sser. You ask for directions to a place and are given information which contrasts with everything else you have heard. ‘ma bi’asser’, you are told. The new route will also get you there, sooner or later. Or you may ask your Lebanese friend whether the new elections, or the various ‘plans’ and ‘initiatives’ announced weekly, if not daily, by local potentates or foreign powers will bring stability to the country. ‘ma bi’asser’, your friend will almost certainly say – perhaps the only such occasion when you too might fully agree with your friend.

The positive interpretation of ma bi’asser is probably not far away from the concept of ‘Lebanese resilience’ that one hears so much outside the country and witnesses it inside. As an Iranian, I have found this interpretation quite refreshing. An Iranian journalist visiting Lebanon not long after the Israeli invasion of 2006 told me about meeting a family outside the ruins of their house in south Lebanon. ‘That was our house,’ the father had said, laughing and pointing to the heap of rubble nearby, rather than telling a tale of misery, inviting sympathy, or pity.

True, such destruction has happened in Lebanon so frequently that you could suggest people have gotten used to it. But still, there is a difference between being ‘accustomed’ to a calamity and shrugging it off, on the one hand, and laughing about it, on the other. After all, some of us Iranians are still angry with the Greeks because Alexander destroyed Persepolis more than 2,000 years ago. Being able to look back and laugh at a misery or calamity means one has conquered it and can say, ma bi’asser.

My second Lebanese lesson for life is based on a deeper meaning of the word bokra, or ‘tomorrow’. One Friday at work, a colleague who was walking down a corridor with me pointed to a poster on a wall and told me, in Arabic, that it showed a prominent person whom he would introduce to me bokra. ‘But bokra is Saturday,’ I said, puzzled. ‘Will you two be coming in?’ My colleague explained that he had used the word not to mean literally the day after, but ‘sometime in the future.’ A year-and-a-half later, I still have not been introduced to the prominent person in the poster. Obviously, that particular ‘sometime in the future’ has still not arrived.

Lebanese are not alone in sometimes preferring to ‘leave for tomorrow what does not have to be done today’. But the negative consequences of such an attitude are not difficult to see. Some, including many Lebanese, attribute the country’s ills – especially the political instability that has often caused turbulence and violence – to the lack of a clear vision about the future; the ease with which promises are made, but not delivered; and the ease with which those who made the promises can relieve themselves of any responsibility. After all, they meant they would do whatever it was that they had promised to do bokra – ‘sometime in the future’. That time has not yet come. Therefore, it would be unfair to judge them – yet.

The positive interpretation of the indefinite bokra could be seen in its contrast with the relentless push to get things done immediately which is on display in numerous American police, war, and espionage movies and TV series on various Arab satellite channels. In almost every episode, there are frequent uses of assertive expressions such as ‘come on’, ‘move’, ‘go, go, go’, and ‘let’s do it’. The premise, evidently, is that something has to be done ‘now’, and the lead character has to persuade, urge, or even coerce others into ‘doing it’. If such characters, and the real people on whom they may have been modeled, could realize that there is a bokra, they may not have pushed others into the frenzy of killing and maiming on the screen and in real life that is called ‘action’.

My third lesson for life from Lebanon is inspired by the ads for the country’s leading brand of beer, Almaza, or diamond. The company has displayed some witty billboards which stand out among the ads covering both sides of the often jammed highway between Beirut and the northern resorts of Jounieh and Jbail (Byblos). During last year’s campaigns for Lebanon’s parliamentary elections, one Almaza billboard introduced a tall glass of beer, with froth on top, as ‘The Clear Winner’. Another promoted ‘The Current of 24’ – bottles, that is – as distinct from Lebanon’s rival political blocs, ‘The Current of 8th March’ and ‘The Current of 14th March’. My lesson is embedded not in the big captions, but in the smaller motto at the bottom of all Almaza billboards, on shop fronts, and elsewhere, which says rather quietly, heidi jawwna, heidi nahna, ‘this is our mood, this is us’.

While Almaza uses the motto to elevate its brand, the concept can also be abused, to explain away our misdeeds by saying ‘this is who I am, and this is how I behave’; ‘this is how God created me’; and so on. But to me, the expression has brought great relief, in Lebanon and elsewhere, especially in situations that might otherwise have led to frustration and anger. When basic facilities or resources are missing, promises are not kept, and simple tasks are not performed, or are performed badly, I remind myself that heidi jawwna, heidi nahna: this is what we human beings – including myself – are; this is who we are; and we cannot be changed immediately, by force.

Related to this reflection are also more positive ideas arising from my other two favourite Lebanese expressions. Firstly, there is always more than one option, and the result of each may not be fundamentally different from that of the other. So, do your thing and let others do theirs, because in the end, ma bi’asser very much. Secondly, while you must not lose sight of your goal, it might not be a good idea to push to get everything done NOW, believing that otherwise the world will come to an end. ‘Bokra,’ as Scarlet O’Hara might have said, ‘is another day – or another year’.

All things considered, and in spite of everything they have been through, the Lebanese people as a whole share such a rare combination of patience, tolerance, and good humor, that one can only leave Lebanon with fond memories – eager to return as soon as possible.