What would Cyrus do? 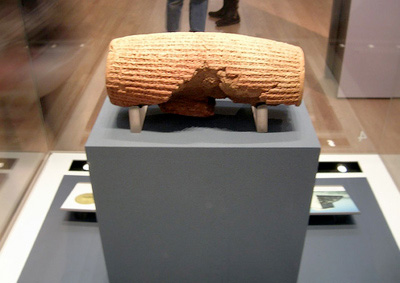 A Thai woman boarding a flight at Bangkok’s airport is caught with a sedated tiger cub in her luggage. Stuffed in a bag with, er, cuddly tiger toys, this tiger was revealed by the X-ray machine to have a beating heart.

The woman’s identity is not being revealed as police quiz her about her final destination which, of course, had to be Iran, the most bonkers country on earth.

Why was a 31-year-old Thai woman smuggling a tiger into Iran?

A YouTube video currently circulating shows a street in Iran – it’s not clear which town – where passersby are pointing mobile phone cameras at what is unmistakably a lion tied to a tree, as its owner shampoos it.

For those not familiar with Iran, this is in fact a highly irregular sight: it’s not like your neighbour will be washing the pet cougar in the garden there before tending to the hyenas.

The lion steps back and forth and seems too demoralised to bite anyone’s head off. Perhaps it came to Iran in a suitcase with cuddly lion cub toys. In a week when the great British public was outraged by CCTV footage of a middle-aged woman throwing a domestic cat in a wheelie bin, one can only feel for the cat’s bigger cousin in the Islamic Republic.

So bonkers are the antics of that country’s Islamist government that even if the lion were thrown into the wheelie bin, few would be surprised.

Last year an amateur film about Tehran Zoo revealed a host of unhappy animals in conditions, well, not fit for animals.

Animal rights register poorly in a country where human rights duck for cover.

This week Carla Bruni joined French intellectual to issue a letter a day addressed to Sakineh Mohammadi Ashtiani, the 43-year-old Iranian woman who is in limbo after her stoning sentence was commuted and her lawyer forced to flee to Norway. (The letters appear in Elle, La Règle du jeu and the Huffington Post.)

“Having learned of the sentence pronounced against you, how can one possibly remain silent?” writes Bruni, evidently flummoxed by the Islamic Republic’s “barbarian practices”.

(Iranian TV responded by suggesting that in defending an “adultress” Bruni aimed only to make good her own supposed sins.)

“The Iranian people are among the most ancient and remarkable nations of the planet,” she added.

“I do not understand how the heirs of a great civilization built upon tolerance and refinement can be unfaithful to this millennial heritage.”

Perhaps she could tell this to the British Museum who are about to loan the famous clay “Cyrus cylinder” to Iran – the size of a hand and 2,500 years old, it’s one of the world’s oldest cuneiform-inscribed declarations of humane intent by a ruler — its replica sits at the United Nations headquarters in New York.

Former French president Valéry Giscard d’Estaing, in his letter to Ms Ashtiani-Mohammadi, writes: “From its very origins, humanity has worked to free itself of cruel and primitive behaviour. In every culture, civilization seeks to reject practices that are detrimental to the dignity of human beings. Stoning is one such practice.”

President Sarkozy has also thrown his weight behind the campaign: “The [Iranian] regime exercises control by repression and resorts massively to capital punishment, including its most medieval form, stoning, with which Mrs Mohammadi-Ashtiani is threatened.”

Separately, in a comment piece for the Guardian (“Iran is attempting to decapitate its Bahá’í community”) Cherie Blair, writes: “When a mother of two can be sentenced to death by stoning on the basis of a disputed confession of adultery and without proper legal representation, there is little reason for faith in the fairness or mercy of Iran’s judicial system.

“But as in the appalling case of Sakineh Mohammadi Ashtiani, the 20-year jail sentences just handed out to seven Bahá’í leaders must provoke an international outcry in the hope that the Iranian government can be shamed into thinking again.”

Comedian Omid Djalili has, on YouTube, backed this cause too, expressing outrage at the treatment of his fellow Bahais: “The fact that these seven are held in prison as if they’re perpetrators of the most heinous crimes is just ridiculous,” he says. “There is no definitive crime of which they are accused”.

The BM is likely to get a shock when it hands the Cyrus Cylinder to Iran and they say, “Oops, dropped it.” It hasn’t got a track record for looking after Iran’s pre-Islamic heritage.

In any case, as I’ve heard this week it is preparing to send it, all hush-hush, it’s worth quoting at length from the blog standupforwomen.wordpress.com on the conditions in Iran’s infamous Evin prison, posted in May:

“At ward 209 the food quality is so low that many women refuse to eat the food and stay alive by eating crackers.

“Women prisoners have been told that it’s the responsibility of their families to provide them with blankets, clothing or something to sleep on. The prisoners are also forced to pay some rent for the cells they are kept in. The prison is infested with lice.

“One female prisoner has informed us of some strange flesh eating bugs.”

The UK government must surely intervene and stop the BM lending what millions of Iranians regard as a symbol of human rights to a country that so routinely denies them to people; while it’s at it, it should consider shutting down the London bureau of the Islamic Republic’s propaganda channel Press TV.

Such gestures will only add pressure to the Islamic Republic’s embattled but ruthlessly violent leadership.

For now the lion many Iranians believe should take its rightful place on Iran’s tricolour (in place of the Islamic Republic’s “Allah” logo) remains strapped to a tree and is being shampooed. Still, at least there’s hope for that tiger cub.