Nazri in the Orchard 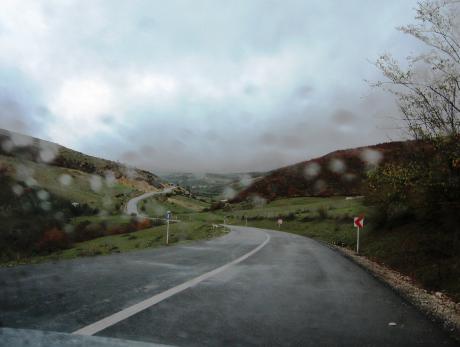 It’s the mid 1970’s and we’re in the 11th grade; teenagers full of piss and vinegar and a few days after the first of the month of Mehr in the Persian calendar, the official start of the Iranian school year and the beginning of autumn or the September equinox. Streets are busy with cars and buses. My high school is situated in a location where one could consider it the best it can be: there are 3 other all-girl high schools within a kilometer or two of the school. Life is good!

I drive my mom’s car today. She doesn’t really need it as she does not work outside the house, but I need it. I gotta pick up my buddies Kamyar and Farzad before school. It’s Wednesday and we have big plans for the upcoming weekend. Oh, did I mention that I still do not have my driver’s license? In Iran, the legal age to get a license was (is?) 18. I’m not there yet…, but I don’t let that stop me. I’ve known how to drive since the age of 12 when I cruised the empty streets of the factory complex where my dad worked in his 190 Benz, the kind with the gear shifter on the steering column. Oh, what a car. They don’t make them like that any more.

If we have time we will stop by the neighborhood gahve-khaane (local coffee shop) and grab a breakfast of fried eggs, fresh Sangak (flat bread baked on a bed of hot gravel, and hence the name) and a large sweet tea…umm. I still remember the taste. Most of the time though, we were pressed to get to school on time, and most of the time, we did!

We get to school and start our day in the tough Riyazi (math) curriculum, but our minds are somewhere else. I am not quite sure if our attention is focused on 2:30 PM when all the schools let out at once, and for a while the streets surrounding our school are filled with high school girls and traffic jams, or could it be that I’m thinking about the party we’re invited to this Thursday night? Suffice it to say that the Mossalasat (trigonometry) class is even more boring than before and I am thinking why do I need to know all this crap this early in my academic life? No wonder after starting college abroad, and for 2 years after, I aced all the math courses I took; I had taken them all in high-friggin’-school……ahhh, after all these years, it still irks me when I think how tough high school was in Iran. Tough, but the best time I had as a kid.

It’s lunch time and we leave the school grounds for a number of nearby (and some not so nearby) places to grab some lunch. Even then, while the boys in all boys’ schools were allowed to leave the school for lunch, girls were not. One of the all-girl high schools close to our school had a guard (darboon) who was famous for his tactics to keep the girls inside school grounds. We had heard that he even caught some of them trying to jump the fence on their way out (to lunch) one day. Oh yes, lunch was a jolly time for us and for one hour we would forget about school, the tough courses, the daunting prospect of the senior year ahead of us in the Riyazi curriculum, the 12th grade finals next year and the ensuing entrance exam (Koncoor) where 200,000+ students competed for few available spots in the universities that were at the time. On the way to or from lunch, we were often stopped by guys who made a living taking photograph of tourists and in this case, students on their lunch hour. Each one of us has a number of photos that date back to those days and I’ve been scanning them recently and sending mine out to those high school buddies I’m still in touch with. It’s really groovy.

The afternoon classes were the worst. After a lunch of burgers, hot dogs, or a variety of other unhealthy nourishments, we would be lucky if we could keep our eyes open. Specially challenging were classes such as Hesaab (sort of a theoretical math class –tough as shit) where sometimes I wished I could just slit my wrist and get it over with….But then, there was 2:30…the moment when all the schools let out and the streets would turn into a teenage heaven. It was hard to decide which way to look. We were lucky as the main bus stop in the area was a few hundred meters from our school and all those who took the bus home had to walk by our school to get to the bus stop. It is no wonder that sometimes we did not get home until 5-6 in the afternoon. There was one cute girl who had the pictures of Eric Clapton on all of her binders’ covers (classor). I remember Kamyar used to tease her and would call her “Eric’s cousin”. I must note that we were gentlemen and never ever engaged in inappropriate behavior or matalak (wise cracks I suppose would be in English. Things like that were almost exclusive to low lives who would later join the ranks of revolutionary guards and basijis). There were even a few friendships that sprouted from these exchanges, but that is another story for another time.

Later that year and close to the Persian new year, I got into a car accident on my way to Kamyar’s house and even though it was not my fault, because I had no license, I ended up as the guilty party and had to pay for the damages to the clown’s car who ran the stop sign and slammed into my car. I guess I was lucky I did not get hurt as I was going pretty fast and the idiot did not even stop.

I remember that year the traditional religious mourning holiday of Ashura was around late autumn. Yes, even then – the so called secular era – our passion for loving dead Arabs was rampant. One day, Kamyar informed us that one of their distant relatives was going to have a Nazri. A Nazri is a feast-like occasion where a family would cook food and distribute among the poor and needy as charity. The idea of a Nazri is you make a pact with the Saints, or god, and give to the poor and they, in return, make a wish for you come true. The wish usually is for better health and perhaps prosperity for the family and their loved ones. This was to take place in a private orchard (baagh) that had a nice villa somewhere outside the city between Karadj and Tehran. This place is now smacked in the middle of the city, I bet, but back then was outside the city proper and therefore not very easy to get to if you did not have a vehicle. He suggested that we go because the family throwing the feast was rich and the orchard was someplace special. He also noted that Elaahe’, whom he fancied a lot was going to be there….OK, I get it. That’s why he wants to go. He had his own….”Nazri”……

The feast was on a Friday so I, Kamyar, Farzad and a couple of other close friends left that morning on foot to get to the feast. My mom had plans and needed the car that day, so I didn’t have the car. It was about 20 or so kilometers (more or less) from where we lived to the feast central. We hailed a cab for some distance, hopped on the back of a vaanet-bar (pick up truck), and even hitch hiked before getting there around 1 in the afternoon. There were at least 8-10 cars parked inside the gated orchard with the least fancy being a Peugeot 504! “Wow”, I said, “this is some charity event, ay?” we moved in closer and after greeting with those we knew (which were not many) made our way to the kitchen which had expanded from indoors to outdoors with huge pots and pans boiling and steaming on multiple open fires outside. The traditional food for this type of charity event is Gheymeh (yum). There was enough gheymeh there to feed The Iranian Imperial Air Force (hey that’s who was in power then, same guys whose fighter jets are being repainted now as “new”. OK? No revolutionary guards, not for another few years…). We realized quickly that Kamyar was missing and soon found out that he was moos moosing (following) around Elaahe whom, I must say, looked fine that day. I couldn’t fault the poor chap for falling for her. The orchard was huge and the entire teenage entourage of about 12 had retreated to the bowels of the orchard away from the inquisitive adults for some entertainment. After dinner (more like late lunch) and after we helped package the food for distribution (yeah, they actually gave away 99% of the food, which was the idea), it was around 6 PM and getting dark. One by one the guests and their Beemers and Mercedes and other non-identifiable vehicles exited the orchard. Kamyar’s parents asked if we wanted a ride, but with 5 of us, there was no room and we weren’t the kind to abandon friends in the middle of nowhere in an unfamiliar orchard….So, we started walking wondering how we were going to get home. Almost dark, we got a ride form a small truck that carried fruit to the market south of Tehran from various places around Tehran and Karadj. The truck bed was half empty and we hopped on the back and shared the ride with the assortment of fruits and vegetables to just about where civilization started along the city limit. From there it was walking and hitching, but no one stopped. We walked for about an hour before a private vehicle that doubled as a taxi (for extra income) picked us up. Nowadays, there are far more people who use their private vehicles as taxis to earn extra money. With 2 in the front and 3 in the back, we made it to our homes right around midnight that night. That was an unforgettable day and we still talk about it whenever we see each other.

It seems like it all happened yesterday, but it was a long time ago. Now when I go back to Iran I don’t even recognize the very streets where it all happened, the people are not happy and everyone walks with a grim face as if they are pissed at themselves for supporting the so called movement that caused the regression of our beloved motherland.