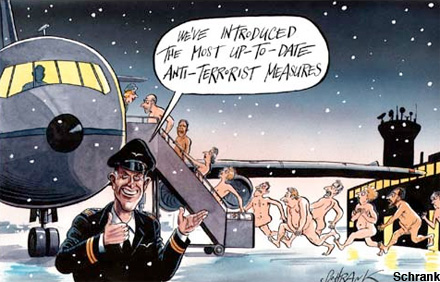 Profile all Muslims and people of Middle Eastern background.

Since these people are prime suspects anyway, profiling against them not only makes sense but saves travelers and tax payers billions of dollars every year.

At airports across the country all passengers must form a line with their tickets and valid IDs in hand. Then a professional profiler from TSA walks by, examines their travel documents and taps on the shoulders of suspects. The profiled passengers step forward to go through rigorous interrogation and screening while others give them standing ovation for their unacceptable looks and for providing everyone else a hassle free travel experience.

Needless to say in return for violation of their constitutional rights, the profiled passengers should be properly compensated. Those who survive the screening process and are cleared should fly first class for free including all meals (with halal meat) and non alcoholic beverages of their choice. Others will be sent to secret prisons to experience enhanced interrogation techniques in person.

If idea 1 does yield desirable result and the threat of terrorism persists, one concludes that the said suspects are posing more severe threat than previously believed therefore,

Ban all Muslims and people of Middle Eastern background from flying, period.

Since implementation of this security measure may cause slight inconvenience for the Middle Easterners and to accommodate their traveling needs when Muslims and Arabs book overseas flights, a healthy mule must be shipped to their address free of charge by Fed-Ex within 48 hours.

If God forbid, after taking all these precautions, an act of terrorism is committed in the air, it becomes obvious that the evil doers have adapted to the new high alert traveling environment. Obviously young bearded Muslims have gone through drastic reconstructive surgeries and disguised themselves to pass through security checkpoint at airports.

At all airport security checkpoints, profile the hell out of the least suspicious travelers including but not limited to,

The blind Jewish Rabbi with asthma in a wheelchair

The expecting pregnant woman with triplets

The hyperactive Cocker Spaniel in cage

The dead uncle transported in a coffin

All these terror suspects must go through invasive pat-down and cavity search with no exception.

If above steps fail, to neutralize the threat,

Put all passengers into sleep during the entire flight.  As passengers board the plane they must be given sleeping pills and wished sweet dreams one by one.

As a last resort and to stop the rise of global fundamentalism and to prevent violence against innocent civilians and create a safer world for everyone,

The U.S. government should quit the bad habit of invading and occupying other countries under false pretenses. This unorthodox measure may (just may) reduce the future threat of terrorism.