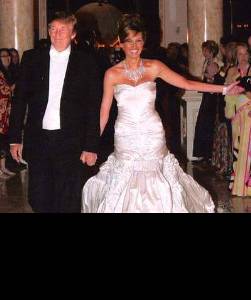 Weddings aren’t cheap. The average American wedding costs about $30,000. What if you could afford to spend that much (or more) on your wedding dress alone? Or spend $1.5 million just on wine for your reception? For some, money is no object. They can, and will, spend upwards of millions of dollars to show their love for their betrothed to the entire world. Below are some of the most expensive weddings ever recorded. Some of these became more costly, as they didn’t survive very far past the nuptials, ending in divorce just a short time later. In those cases, the wedding ended up costing at least one party much more than the stated price tag.

This article has been written by: George K.

Although it costs just a measly million dollars, the Palm Beach wedding of Donald Trump and Melania Knauss in 2005 was quite an opulent affair. The Grand Mariner cake weighed 200 lbs (!); and the bride’s Dior dress cost $200,000 with a 13-foot train, 1500 rhinestones and pearls, and weighing 60 lbs. Performances by Tony Bennett and Billy Joel entertained the guests, consisting of Bill and Hillary Clinton, Shaquille O’Neal and Rudy Giulaini. So far, this one has lasted, not costing the Donald more in the long run like many of his prior marriages.