This time take no prisoners 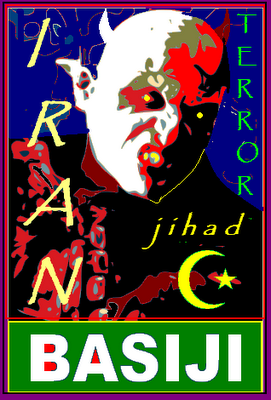 One of the most haunting images of the 2009 uprisings was an ordinary Iranian woman using her body to defend a Basiji motorcyclist from the wrath of the oppressed Iranian people.

The Basiji thug dressed in riot gear wileding a baton ready to strike out at his Iranian brothers and sisters with no mercy was reduced to a whimpering wretch begging for mercy. But lets not judge him too harshly maybe he too was a victim of the regime with no future and no means of supporting his parents and family other than to join a group of paramilitary thugs.

Compare the humanity of the courageous woman to the despicable merciless Basiji in the next video who pins a woman agianst the wall and lets lose a volley of blows with his stick:

My message to Iranian is this: this time leave no hostages to fortune. Your mercy and compassion will be paid back in bullets and blows to your hands and face. Fight the Basij and Sepah with all your might. If they attack you then kill them before they kill you.  Show your heart of steal and unleash your anger.  DESTROY THE ISLAMIC REPUBLIC AND ITS AGENTS MAXIMUM PREJUDICE.

They will do the same to you and worse. They will imprison you, torture you and rape you.HIT FIRST AND ASK QUESTIONS LATER Cut down the hands of the oppressive illegitimate occupying terrorist regime if it dares to stop your sacred and noble cause.

Show the Islamic Republic a St Valentine massacre they will never forget.

FIGHT IT. CONDEMN IT. DESTROY IT.

PrevPreviousWill Iran change heavy-handed tactics against pro-reform protests?
Next3 down, 12 more to goNext