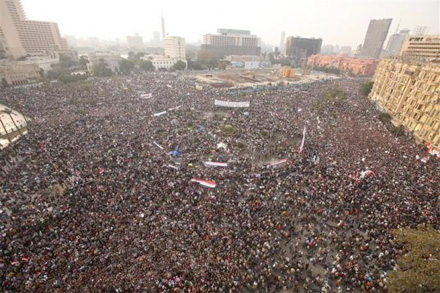 The revolts in Tunisia and Egypt will go down the history as two of the fastest and easiest “revolutions” of all time! It is almost certain that the US was instrumental in bringing the rapid change, and this is good news for people and bad news for dictators. The American involvement by no means should belittle the heroism of the Egyptian people. They have made their history again and we should all hope that the consequences will be equally hospitable. Revolutions generate lots of hope, energy and optimism, and the young Egyptians are now filled with these positive qualities. But revolutions are also fraught with serious dangers.

The US role remains critical in understanding these dangers and advising Egyptian leaders accordingly.  Will it? We should hope so!  In the last 20 or so years (when I have struggled for better US-Iran relations), I have been arguing that “no country has ever become democratic in the absence of diplomatic ties with the US, and that anti-American governments are also anti-democratic.”  This does not suggest that governments that have normal relations with the US are or become automatically democratic. What this correlation or association indicates is that normal relations with the US are a necessary condition for democratic change in dictatorships, though it is not a sufficient condition.

Indeed, dictators who have normal diplomatic relations with the US collapse faster and easier than dictators who have no such relations with the US.  Anti-American governments are also less likely to be overthrown as these entities behave like “people in the streets.”  Think of Iran and Cuba — the US has been trying to overthrow governments there but instead governments are overthrown in “friendly” Egypt and Tunisia!  Diplomatic ties and trade melt dictators, while isolation and sanctions fatten them! Let us hope that the US government learns this simple lesson borne by its own experience and apply it to Iran as well!

Mubarak’s departure from power is certainly a welcome first step, but more needs to be done for democratization of the Egyptian polity. It is always easier to revolt than to rebuild as the Iranian experience has vividly shown. We all know that the young Egyptians were instrumental in the revolt stage but Egypt needs wise and mature political and business leaders to rebuild the post-revolutionary society. Does Egypt have enough of the second group or they are more like the “politicians and merchants” in Iran (secular and religious alike)? I hope it does, as otherwise returning to square one is a real possibility.

We already see the sign of danger as the “transition to democracy” in Egypt is going to be managed by a military junta.  This institution has played the key role in Egyptian anti-democratic polity since 1952, when General Muhammad Naguib and Colonel GamaL Abdul Nasser overthrow the Monarchy in a coup. Will the junta transfer power to, or share power with, the civilian leaders? We should hope so! Does Egypt have the kind of civilian leaders that the military and their Western allies can trust? We should hope it does! Are there civilian leaders who really understand the intricacies of the transition to democracy in a nation of many antagonistic interests? We should hope there are!

Egypt may need a Turgut Ozal, the Turkish politician who convinced the army to leave the governing polity after several decades of ruling with iron hands. But the Egyptian Ozal must also understand another critical Egyptian reality: that now is the time for strategic (not just tactical) and honest compromises among competing interests and needs. The Egyptian society is comprised of three interest groups and three corresponding needs: the upper class (the generals, the capitalists, the old guards) are after economic growth and wealth accumulation; the middle class (professionals, the intelligentsia) is for political development (democratization or political reform), and the base class (workers, peasants, poor) is for social justice (provision of basic needs).

Democratization in Egypt demands that these interest groups and their legitimate needs are brought together in a grand compromise plan of action and that can be best achieved by the formation of a coalition government. The governing coalition must also avoid the usual populist anti-Americanism in the region! It is now time for inclusion and not exclusion – at all levels! Will these interest groups, the junta in particular, understand the need for such a grand compromising scheme? And do they have the required political culture to help in this process of national reconciliation and democratization? We should hope they do!

Beyond these interests and needs, there are other important areas that require reform, including balancing international relations, avoiding anti-Israelism while promoting Palestinian interests, harmonizing tradition with modernity, reconciling Islam with secular life, attending to minority and regional affairs, creating jobs for the young Egyptians, and securing women and human rights.  A sea of issues awaits Egyptians but it is critical that they go in steps and on the basis of a well developed set of priorities. They also need to be patient. A rush to action is deadly in a sensational situation that can develop in Egypt.

What happens in Egypt in the next several months is critical for the future of democratization in the larger Middle East and North Africa, and the most important first step will be holding free and fair elections. We should all pray that the Egyptian people will set a great example to be followed by other nations. It is our responsibility to help as well, perhaps by theorizing, offering ideas for the transition, and providing the right examples.

AUTHOR
Hooshang Amirahmadi is a professor at Rutgers University and president of the American-Iranian Council.