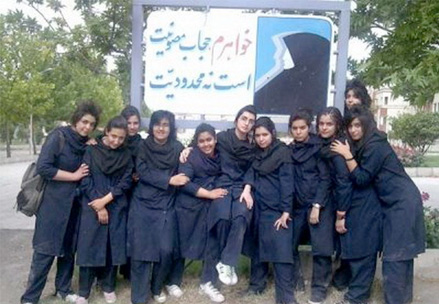 The protests have shown that a lot of people are dissatisfied with the regime and want freedom. But what is freedom and is the current approach the correct way?

The green movement is by its definition a social movement against social injustices. The method chosen to show discontent is to gather people and yelling “we want freedom”, “death to X”, “down with dictatorship” and clashing with security forces. Although this method is pretty straightforward there might be alternative ways to tweak the demonstrations in order to gain more sympathy.

The tweak is to focus on factual matters, and this could be done in different ways. One way could be to organize a demonstration against women’s hijab. A thousand women could remove their headscarves, with the support of thousands of men in a peaceful march. The chants could be “we don’t want the hijab”.

The focus is to challenge existing Islamic laws either by showing, or by chanting concrete issues. Also there needs to be more messages displayed in written form during the demonstrations. The issues could then be extended from social to economical and finally to political issues.

At the end people will create a more concrete unified message which they could define as freedom. Iranians must basically learn how to define this freedom during the demonstrations, a simple chant for “freedom” or “death to X” is not enough.

It is important to avoid violence at all costs, hate only creates more hate. Why not let the women without hijab carry a flower to the guards? People react differently if a specific behaviour is carried out by a very large group, in this case thousands of hijab-less women carrying flowers. After a while these types of concrete actions/messages will gather a larger support from the population. For example, compare how the lower working class reacts now with how they would react if e.g. job-related issues were chanted.

Iranians have to define their freedom step by step and make sure that the majority of the people follows the message. It is pointless to fight if you don’t know, or won’t share exactly what you want for you and others…