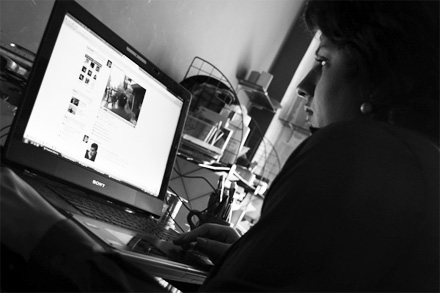 On the evening of February 10, while many Iranians were following the news of the revolutionary reforms in Egypt and the dethronement of another dictator in the Middle East, security forces in Iran broke into the residence of students, political activists, and family members of reformist leaders Mehdi Karroubi and Mir-Hossein Mousavi, to arrest them.

The revolutionary uprisings in Tunisia and Egypt have astounded and stimulated the Iranians who returned home after a nine-month string of demonstrations last year. Many asked themselves why Tunisians and Egyptians made it but they did not. Many believe that the reformist leaders prevented the revolutionary transformations from being fortified.

Many Iranians, imitating the Egyptian and Tunisians, have opened Facebook pages in order to spark new street demonstrations. In fact, Facebook has been instrumental in organizing the demonstrations that have taken place this week, turning out thousands of protesters.

There is a risk that resistance will lead to a consolidation of the regime’s power, as about 1500 people have already been arrested this week. However, the regime has been terrified. Karoubi, who is known by some as more reckless than Mousavi, is under house arrest. The contacts between Mousavi and Karoubi and his family are highly restricted. The most important sign of the regime’s fear is the disruption to Internet speed and connectivity. Access to blogs like WordPress is blocked. It is expected that these restrictions will be highly intensified in the following days. Gaining access to Facebook and Twitter is very difficult from inside Iran, even through the common proxies.

Nevertheless, people find an opportunity to call for demonstration, just as before. One can argue that it is miraculous that Facebook exists in the country at all. Facebook was first used in Iran in February 2008, along with other social networking sites. Sites that had been filtered and illegal for years were made available, which left everyone flabbergasted.

It turned out that the regime lifted the ban on websites like Facebook to attract more people for their election shows, using Facebook as a vehicle of propaganda for its legitimacy. But social media proved to be a double-edged sword, as it turned to stimulate demonstrations and street hostilities. The extent of resistance astounded the regime. But after the bloody repression of the presidential protests of June 20, 2009, in which according to some reports 50 people, including Neda Agha Soltan, were killed by militants or snipers, fewer rallies took place. Meanwhile, the regime mobilized, clamping down more tightly on both demonstrations and social networking sites, and the demonstrations subsided.

Although there are no statistics on the exact number of Facebook users in Iran, it is estimated that about 700,000 Facebook users were active from February 2008 to June 2009. Many of these users are still finding ways to log in, in order to keep up discussions with friends, family members, people abroad, and anyone who shares their ideals.

There are currently hot debates on Facebook. Although some still support Mousavi and Karoubi’s leadership for a more gradual reform, some are willing to rely on the leadership of the masses and their collective wisdom, seeing the need for a dramatic transformation that will not end in a failure similar to that of the rallies in 2009.

Regardless of the outcome in Iran, Facebook can once more succeed in playing a revolutionary role in organizing protesters against a dictatorship, just as it did in Tunisia and Egypt.