Getting “There” From “Here” 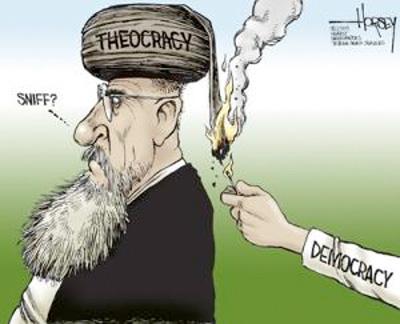 Once again, we bear witness to the possibility of that most elusive of all aspirations, namely our true potential as free Iranians.

Once again, the wall we face is more of a mirror and faced with our own reflection,we are forced to confront our willingness to commit to push through the thin veil of intimidation that our oppressors bet with a smile, we are too cowardly to pass through.

While the protesters in Tehran valiantly give the fast fleeting memory of the momentum of the Green protests of 2009 (Yes, that long ago!) one last shot at overthrowing the real Basij and militia forces that far outnumber and worse, out gun, and out baton them, the chances don’t look all that good.

Stateside, pundits of all shape, form, color, academic, paid consultant to the US State and Defense departments, every ivy league college professor with their young hot Iranian wives, and every other career path provide every single excuse available to dissect, and diatribe the reasoning for this most recent failure to communicate.

The goal? Yes in absence of a clearly defined goal, we need to actually state one before attempting to achieve one.

The overthrow and precisely excised replacement of a regime that has had every chance to reform itself from it’s radical bent, one that has experimented blatantly with the most ridiculous concepts of faith-based-governance, and repeatedly and obsessively thumbed it’s nose at every single civilized institution in the world.

Even most recently via the Larijani and Majles toady outbursts calling for the death of Karroubi and Moussavi, men who I personally think are entirely useless for Iran’s post [whatever you want to call this period] needs, precisely since for the most part, they are the very tainted products of this incestuous infestation that has laid waste to an otherwise pristine landscape with nothing but pure potential.

The hardest part for us, these last few attempts, has been how do we get there from here.

As is often the case with random dynamic Iranian improvisation, nothing but nothing is ever planned. Nor is it ever imaginative. Planning it seems is one skill the Great Persian Empire deemed not important enough to steal from all the many cultures it “borrowed” everything else from.

Take for instance marching to Azadi Sq. Unless I am mistaken Khamenei lives in north Tehran, not Azadi Sq. So if you are calling for “Death to the Dictator!”, one would think having fun storming his castle would be the logical thing to do. But gathering in a huge flat ground of Azadi Sq that has one single large impenetrable parapet from which Basiji and Militia snipers can take easy shots at you all day long, would not be high on the list of places to gather.

You see Azadi Sq was never meant to symbolize freedom. It used to be called Shahyad square and was built to symbolize one above all, or arrogant tyranny.

Given the penchant for gleeful blood letting and the sheer pleasure of off-the-leash violence that the zombie army of the Basij has shown as they cut through the protesters with eyes rolled up into the back of their heads in sheer ecstasy, add to this the precision of the Gestapo-like Militia, we may never be able to achieve freedom in the streets.

We may have to find another way other than the MLK-style civil disobedience that our academics keep suggesting we need to employ. The reason that won’t work is that Iran as studied and prepared how to put down MLK tactics too. And Dalai Lama. And Gandhi. The simplistic romantic act of standing up to tyranny and oppression in this modern day and age, while nostalgic to those who wished they grew up in the 60’s, is merely a tell that the oppressors in Iran know about already, and they are all too willing to call your bluff, and are willing to wager that if they cut enough of us down, we and not them will back down. Because we usually do.

I don’t know if this would even work, if, as they cut us down, enough of us kept getting back up, and I’m sure there would be a tipping point somewhere along the way, but I think this government is all too willing to bet we won’t and the Basij enjoys hunkering down for the long winter. Because they are paid to.

Meanwhile with the sudden disappearance of the Green Movement in the last day of it, in 2009, I don’t think Iranian protesters have the kind of stamina needed to be all that willing to out-die everyone in this game.

Outside help from the deepest desirous loins of the Obama Administration that like a caged giant cat, is ready to pounce on Iran at the slightest opening of the door, would merely strengthen an already strong argument that the US has nothing but disdain for Iran, as has been amply proven since 1953, and don’t worry, I hear you, and i’m not even going to go there, girlfriend.

Reza Pahlavi seems even more useless to us than usual at this darker than usual hour. But as usual he appears like a frustrated Jack Nichols at a Laker game, because he thinks he can play better than Kobe. If only we would send him in.

Social media like FaceBook and Twitter are useless but of course commercially willing to help us as long as we click on their ads in the process. But the problem with social media is that it isn’t really real. Especially when the bad guys figure out how to shut down the internet. Which is so easy to do these days, even Obama is learning how to do it. Himself! From his Blackberry!

Iran already knows all about the internet. They also know how to send fake Tweets, Tag you in their photos, join your Groups, Friend you, Like you, and then proceed to Piss on your Wall. They are especially good at Mafia Wars. Both versions. They are so web-savvy, that they don’t understand the appeal of Farmville.

The one idea never tried though, but quickly and oft poo-pooed, has been the organization of an actual opposition outside of Iran. Because I hope you know that we don’t actually have one. And no, NIAC doesn’t count.

You see, in spite of the prison walls we have built up here and LA to protect our egos, outside of Iran, we are utterly, completely and entirely free to do whatever we wish. For example, we can paint, dance, write, and yes, we can even be apathetic and entirely ignorant to our part in the ongoing plight of our homeland. Of course, if that is our choice.

And Oh! how many of us too willingly choose that choice!

But, just for giggles and an entirely optional exercise since we’ve NEVER tried it, might we not consider an organized opposition that would collect the entire objection to the Grand Ayatollah’s Grand Experiments, and point out in minute detail each and every failure that has been more than adequately illustrated since 1979. You know, standard Cost Benefit and ROI Analysis. Just like we do for the VC we woo on a daily basis to fund yet more startups. I know I for one, would like to read that businessplan. A lot.

While we wait for the obvious though, I fear we will be watching more CNN and Fox reporters get smacked in the head, which don’t get me wrong, there is nothing more delicious than seeing Anderson Cooper HandyCam himself while taking a beating, but for once I’d like to actually pay attention to the news.

While we are not Egypt, Egypt is most certainly us. Egypt merely thinks they have had a revolution because their Shah, like ours, “raft”. As eventually happened when our own version of the Muslim Bruthahood took over our “Hood(s)”, so too is this now happening in Egypt. No I mean right now, today during this Friday’s Prayers. The youth are simply too busy partying like it’s 1999 to notice. By the time they recover from the hangover and find their Raybans, and underwear, in about say 6 months from now, just like Iran, it will be too late. 6 months. 6 months before we see the same Generals pictured after they are shot for treason against the new Muslimified Egypt.

As I am sure some of you will now point out, I could very easily be wrong. But right now, sadly, I don’t see anything yet, that convinces me I will be.