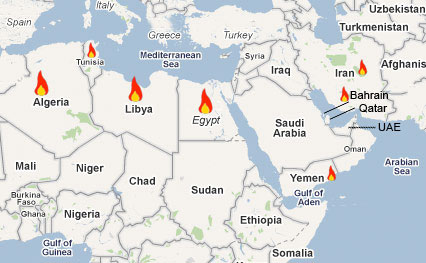 Following 18 days of a dramatic show of resolve of the mass movement of the people of Egypt and the foxy maneuver of the US-allied and torture-friendly regime of Hosni Mubarak, the outcome was not only the downfall of a Middle Eastern autocratic regime but also a strategic defeat for a long-term model of building U.S. hegemony through installing heavily armed dependent dictatorships.

The thirst for liberty, social justice, and self-determination felt by the people of Tunisia and nurtured with resolution, creativity and the blood of the country’s youth was well-grasped by their Arab and Muslim brothers and sisters in the land of Gamel Adul Nasser and in Yemen, Jordan, Morocco and Bahrain.

Hence no national or ethnic authority or grouping can claim that the Muslim nations under the influence of their religious school of ideas have forever lost their ability to conquer the zenith of social order and harness the power of science, technology and social dynamism.

The Arab and Muslim nations in a short span of time, less than a month proved that for self-governance and real democracy – and not just corporate money-dictated elections – they have no need for a bully like George W. Bush at the head of a group of militarists from Texas and Zionist thieves from Brooklyn, New York to come down seven thousand miles to force the sword of “democracy and civility” down their throat, using bullets, depleted uranium, bombs, drones and the terrorists of Black Water Xe.  After all, the Muslims, including Iranians, have had much longer civilizations than such individuals like arrogant Donald Rumsfeld, phony Hillary Clinton and immoral Tony Blair can claim to. But even now, after all the valiant struggles waged by the peoples in North Africa and the Middle East, nothing prevented the United States’ establishments, official spokespersons or the private corporate media reporters from ignoring the on-going and recent protests of the people of Iraq.  Furthermore, for the purpose of hiding the empire’s existential defeat, they inflate the setbacks or shortcomings of such governments as Libya, Syria and Iran.

On February 19th, hundreds of protestors inspired by the uprising across the Arab world marched on the streets of the city of Sulaimaniya in northern Iraq when they began calling for eradication of corruption in the state apparatus and approached the headquarters of the Kurdistan Democratic Party where clashes two days earlier had killed two people and injured dozens, the state security forces began firing in the air. Even so, the “hospitals in Sulaimaniya received 48 wounded people, including 19 police and security forces,” said a health official who did not reveal his identity.  He added, “There are 11 people wounded by gunshots.”

To expedite the withdrawal of U.S. forces from Iraq, the protestors organizing mass rallies for Friday said they plan to make sure the challenge would remain peaceful but added that Baghdad’s Green Zone would remain a target as long as the U.S. forces occupy the country.  In the country that has been ravaged by eight years of war,  occupation, plunder, mass murder, destruction and torture, protestors, following their brothers and sisters across the Muslim and Arab world, burst asunder in Baghdad, Kut, Kirkuk, Ramadi and ten other cities and towns to defy the U.S. imperialist order. Around the globe the peace movement now more than ever in conjunction with the current militant labor movement should declare their solidarity with the people of Iraq.  It is truly an irony to hear that those in the White House and the State Department whose regular profession has been to plan the killing of innocent people in Iraq, Afghanistan and Pakistan by the hour, these days using the chaotic world situation, put on the mask of defense of “non-violence” and “human rights” to hijack the struggle of the people for social equality, the right to organize their own labor unions, political parties and honest elections.

It is needless to say that historical developments such as the ones in progress in North Africa and on the southern coast of the Persian Gulf, Yemen, Oman, Bahrain and possibly frightened Saudi Arabia occur once in a century.  Its final outcome sets the ground for the destiny of those nations for decades to come.  The gravest blunder at this juncture for the progressive forces in the U.S. would be to take and act upon such positions that would result in creating chaos, helping the pro-imperialist forces in the region, parceling the countries involved into smaller real estate properties of the western hotels and construction corporations and ultimately prolonging the deteriorating life of the imperialist system.  Through a series of actions around the U.S., the social justice movement should be able to break the criminal silence of Washington’s media.

While the U.S. mainstream media toe-to-toe follows the formulated guidelines of the White House and the Department of State for undermining the legitimacy of a number of independent states in the Middle East, including Iran, Syria and Lebanon, when it comes to Iraq, Bahrain, Saudi Arabia, Pakistan and Afghanistan, it chooses to remain silent.  In Sulaimaniya where a local television station decided to broadcast the protests and the news of the violence routinely practiced by the homeland security forces, hired gunmen raided the station and set it on fire.  Simultaneously, similar rallies took place in Falluja and other towns and neighborhoods.  While for months the U.S. media practically had censored to death the vital news from the war zones, where the real crimes in wide dimensions are taking place every day, nowadays, the least significant news assembled together even in neighboring countries are dished out to the American public as a sign of U.S. desire for appreciating free development of human potentials.  On the contrary, the U.S. is scrambling to hijack the struggles for independence and re-direct them towards regeneration of center-periphery world relations.

But the U.S. Empire and its allies are not the only force that tends to take advantage of the situation in North Africa.  Among the peace and social democratic groups, one can find entities that lump together the countries that have been so far client states with those that are still engaged in the struggle for independence.  This political tendency creates the potentials that the U.S. imperial power can use to achieve its objectives – continued domination over the oil-rich region.  To unsophisticated Americans, these groups appear as humanitarian universalists who wish everyone well.  But in fact, deliberately or unconsciously, they further the U.S. objectives of domination by other means.

Which Class Would the New Order Serve?

The criterion for differentiating between different sets of countries must be the socio-economic conditions of each working class within the social structure, regardless of the subjective and metaphysical ideas in the minds of the broad masses or their leaders.  The second criterion is the position of the country with regards to the mode of production and the corresponding social relations within the world matrix.  A total and extreme dependency of a developing country on world monopoly capitalist and hegemonic countries would sink the popular masses, the working class and agricultural workers into socio-economic crisis, including poverty, debts, disease-stricken work force, drug addition, wars, hunger and homelessness.  The ultimate outcome of such configuration would be a society in total crisis.

The widespread revolution across the Arab world is a historical necessity within the world scale and also is a reaction of the most oppressed classes in relation to neo-liberal economic policies dictated by the financial arms of the U.S., the International Monetary Fund (IMF), G7, G20, the World Trade Organization (WTO) and the World Bank.  The war imposed by the U.S. militarist and Jingo-Zionist on the peoples of Iraq and Palestine caused consternation and humiliation for the people of the Muslim world.  The reaction of the masses of people is to overthrow and downsize the weak, irresponsible, parasitic and pathetic ruling classes who have become the main link for imperialist exploitation and semi-colonial mode of operandi.

The young people of the Muslim countries have embarked on a process of cleaning up the corrupt, arrogant and wasteful autocracies.

Thirdly, the exploited masses around the world are witness to the moribund nature of monopoly capitalist economy, decadence of its social relations and addiction to war and destruction.  For all the above reasons the youth in the oil-rich region of the world has grasped the responsibility of sweeping the old world into a dustbin.

AUTHOR
Ardeshir Ommani is an Iranian-born writer, political economist and president of the American Iranian Friendship Committee (AIFC) www.iranaifc.com in the USA. He can be reached at: Ardeshiromm@optonline.net