On the Origin and Nature of Patriarchy (6) 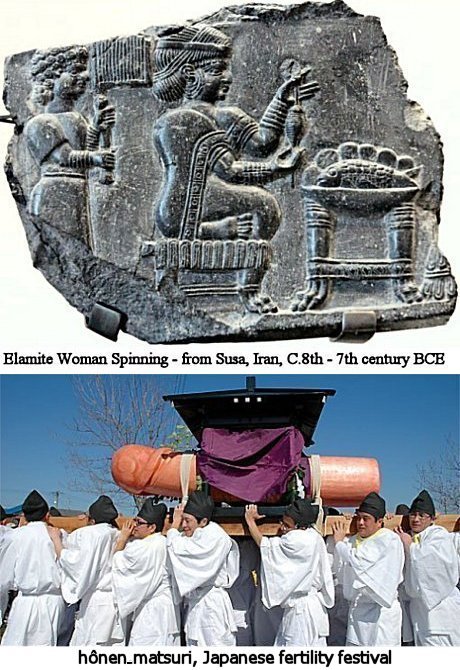 Men decided to deprive women of all their physiological, ritual, ideological, economic and political powers, and prevent them from having any further important roles in economic, political and cultural life of the society. They began exaggerating the value of their economic activities, considering pastoralism, an essentially male occupation, to be superior to agriculture, overestimating their own sexual organs through phallic cults, practicing circumcision, and carrying out the individual or collective rape of women. Men took control of the priesthood as well. Blacksmiths wearing women’s clothing performed religious rites specific to women. Menstruation and maternal functions were devalued and despised along with all traditionally feminine activities such as cooking, hoe-agriculture and hand pottery. Finally, all these activities and procedures took place within men’s secret societies. I will elaborate on these procedures later on.

As mentioned earlier, during this period of transition, the incentive in men to create social paternity drove them towards higher levels of economic activities through various inventions and towards accumulation of surplus goods or wealth in order to buy or kidnap individual women to keep them as mother of their children and become, as social fathers, providers for these women and these children. The process of creation of social fatherhood as a legal institution took hundreds of years and as the wealth accumulated only in the hands of a minority of men, those who had formed a dominant and upper class could form a patriarchal family, which included slaves. So, the Bronze Age societies were characterised by masculine economy, earliest form of productive slavery with female preponderance, survival of the clan property of lands and herds, cohabitating family, which was matrilocal and matrilineal, and endurance of the spirituality of Great Goddess creator of universe. The Trobriand tribes (in Oceania), the Nayar (in India), the Touareg in North Africa, the Pre-Islamic Arabia, the ancient civilization of Elam in Iran’s Khuzestan, Egyptian and Minoan civilizations are examples of these viriarcho-matrilineal societies.

In the first City-States, the preservation of three social institutions of matrilineality, spirituality of the Great Goddess, and Council of Elders, related to the survival of female-centric social relations, campaigned in all social classes especially in the propertied class, in favour of women. Among the born nobility, where the question of inheritance took a considerable importance, matrilineality, which was sanctioned by the spirituality of the Great Goddess and connected to a complex system of millennia female-centric beliefs and values, granted the women of this class a very high social status. Noble women, as mothers, controlled and managed (with their brothers) family and clan belongings; and as priestesses of the temples of the Great Goddess, they controlled and managed (in unison with the priests) the lands and herds that belonged to the temples. So, these women of the nobility, who nevertheless received marital reprimand or could be, in case of adultery, repudiated or put to death by their husband, were not excluded from the right of possession of means of production and wealth. One of the reasons of this contradictory status resided in the following situation: in the cohabitating family, the biological father whose social status had remained that of a stranger regarding his children, could not transmit his property to them. So, he outmanoeuvred the matrilineal system by handing over all his property to his wife, who would transmit it as inheritance to her children, who are often biological children of the husband (e.g., the Elamite society , in Iran, 2600-644 BC.) By a combination of circumstances, the institution of cohabitating family, which aimed only at the interests of men, raised the social status of the women of the nobility by allocating them the management of the property of the husband.

As for the masculine condition in this type of society, it must be said that the matrilineal system of inheritance is incompatible with paternal power. In spite of the rites of couvade and the entrance of the male soul into the foetus’s body, the payment of the price of the child, and even though the husband was acknowledged to be the father of the children of the woman with whom he cohabited, the husband of the viriarcho-matrilineal society continued to look like a disfavoured parent in comparison with the mother’s brother. If the marriage came to be dissolved, the woman returned with her children to her locality of origin, and the relationship of the man with his children came to an end. Even if the marriage lasted for a long time, the father, despite of his efforts, failed to have lasting relationships with his children. From puberty, boys joined their maternal uncles in another town or village and girls went to live with their fiancés or husbands. Among the matrilineal Trobriand Islanders the Southwest Pacific, although the husband is considered to be a benevolent friend, he is not considered to be a true parent of the children to whom he is basically only an outsider. Mother’s brother is invested with authority over her children. Also, among the Nayars of India, the maternal uncle is the legal guardian of the children and is responsible for their education. The nephews owe him obedience, respect and loyalty. If a battle takes place, maternal uncle and nephew make common front against enemies, whom could include the father.

The competition and conflict between husband and wife’s brother over the usurpation of her offspring is a notable trait of the cohabitating family of the Bronze Age. The resistance of maternal uncles against the breakthrough of fathers is justified by the matrilineal system, the blood ties which join them to their sister and compel them, as parents of dominant sex, to protect their sisters and her children, against any attack by men who don’t belong to the clan.

In viriarcho-matrilineal societies, although women are socially under the limited domination of their brother or maternal uncle and under the sexual domination of their husbands, the very fact that the lineage passes by the descendants of women rather than by those of men, gives them the sense of their own identity in a way that patriarchal system cannot do it. The magic of names alone is important. In matrilineal system, women and the fruit of their insides are invested with the perpetuation of species, both in concrete and abstract ways. Serving as link between the past and the future, women have a dignity that they wouldn’t have otherwise. The systems of descent influence the image one makes of oneself, as a woman or as a man, and determine the behaviour which one will adopt towards their fellow individuals of both sexes.

Boulding, Elise. 1976. The Underside of History: A View of Women through Time, Westview Press, Colorado.

Below: Hônen-matsuri, a Japanese fertility festival in which the dankon, large wooden phalli are carried in a procession to Tagata Shrine, is held to pray for both procreation and bountiful harvests. City of Komaki.