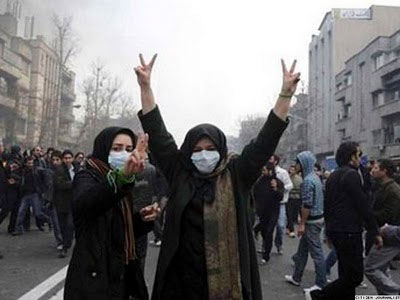 In the wake of the “revolutions” in the Middle East and “revival” of protests by the Green forces, some American “experts” of Iran are calling for regime change. While the Obama Administration does not endorse this misguided view, it could be persuaded to embrace it if the situation in Iran is not better understood and leaders in Tehran fail to unite the country. This article offers a more realistic assessment of the Iranian situation and a path toward national reconciliation and democratic change in Iran as well as a more productive US policy in this time of crises.

On February 14, 2011, after a long “calm,” streets of Iran became scenes of new “illegal” demonstrations called by the leaders of the Green Movement, Mir Hossein Mousavi and Sheikh Mehdi Karubi, in support of the “revolutions” in Egypt, Tunisia and other Arab states. February 14 is three days after the anniversary of the Islamic Revolution in Iran. This act was indeed a slap on the face of the Islamic regime: the opposition leaders, a former prime minister and a former speaker of the parliament, did not want to legitimize the anniversary any longer. Instead, they wished to use the opportunity to show that, contrary to general perceptions, their movement was still alive.

Only future developments can tell if their gamble was worth it. For the time being, their gain is mixed at best: they have established their leadership and have revived the middle-class Green Movement. But they are now faced with solitary “house arrest” and an extremely antagonized regime. Besides, their movement is now threatened by a deadly division between the secular-radicals who wish to “overthrow” the Islamic regime, and the religious-radicals who still hope to “reform” the existing system. Until now, Mousavi and Karubi have remained with the reformers; it is highly improbable that they will ever cross the red line.

Worst yet, the Greens will have now to withstand the onslaught from the Traditional Right (mainly a coalition of clerics and merchants). They control the judiciary, the parliament, and many other key religious institutions of the Islamic regime. Following the demonstrations on February 14th, the ultra-conservative faction within the Traditional Right, with blessing from its mainstream faction, called for the arrest, imprisonment, even execution of Mousavi and Karubi. Their united front against the Greens is bad news for the Green leaders. Before the February 14th, the Traditional Right, convinced that the Greens were no longer a threat, was united against the New Right that controls the executive branch.

Indeed, the February 14th protests have created a breathing space for the New Right (mainly a coalition of young Islamic radicals and the base class), which is also supported by the Supreme Leader Ali Khamanei and the security-military forces under his command. Interestingly, leaders of the New Right have not joined the Traditional Right in calling for revenge against the Green leaders. Ironically, it was originally the protest against “the election fraud” by the New Right that led to the anti-establishment movement. Convinced that the Greens have split and its leaders are neutralized, the New Right is positioning itself to attract the reformist Greens for the next presidential elections. That strategy may prove not an illusion.

Thus, the Green Movement, as we knew it, that is, a radical restructuring movement dominated by the religious reformers, may have come to an end; it will sure survive as an idea for democratization of Iran. From this point onwards, the movement will increasingly center on the struggle between the Islamic regime and its secular-radical opponents determined to overthrow the entire system. They include a growing number of the radicalized young Iranians who supported the Green Movement, the secularized religious reformers, various exile groups, and separatist ethnic elements. Growing evidence suggest that the hopeful regime-changers are supported by the Western powers and their regional allies.

While the situation remains fluid, the balance of power on the streets of Iran will decisively favor the Islamic regime in the foreseeable future. With the exception of the secularized former religious forces, the many diverse Islamic groups will again unite in the face of a common enemy. They will also have the Islamicized military-security forces on their side. The lack of relation with the US, isolation, and economic sanctions will also help them rally the anti-Western Iranians against their opponents as foreign “mercenaries” and “spies.” Thanks to a large oil and non-oil income, and to the soaring oil prices, the Islamic Republic will have enough money to finance the repression for a long while.

Revolutions in the Arab World will also benefit the Islamic regime. The collapsed or collapsing Arab leaders were enemies of the Islamic Republic. In sharp contrast, the people in the Arab streets have been, generally, supportive of the “anti-imperialist” and “anti-Zionist” agitations of the Islamic leaders. Besides, these revolutions have been influenced by 30 plus years of sustained revolutionary street politics in Iran. The Iranian religious Trotskyites believe in “permanent revolution,” and they just love to engage in street politics! This is yet another advantage the Islamic regime has over its opponents. Its “street politics” is much harder to defeat than the “palace politics” of the Arab dictators.

Yet, the most critical factor that will help the Islamic regime to survive is the leadership, ideological and organizational weakness of the “regime changer.” They have no known leaders inside the country, and the leaders outside Iran have no mass following. The various groups are also antagonistic toward each other, and among them are “too many chiefs but only a few Indians.” The lack of unity and the absence of an over-arching political organization will further diminish their prospect to form a united front. The only common ground on which they now stand together is their animosity toward the Islamic regime. Their reliance on foreign powers for funds and propaganda is also problematic.

While the Islamic Republic may have relative advantage over its opponents in the immediate future, its long-term survival is by no means guaranteed given the growing public disillusionment and dissatisfaction. Even if we were to assume the death of the Green Movement, we must not forget that the Iranian people, its upper, middle and base classes, will continue to struggle for their corresponding needs, namely economic development, political reform, and social justice. Given the national discord, the Islamic Republic will hardly be able to provide for these needs. Meanwhile, its opponents, which have centered on the middle class, are also growing among the upper and the base classes.

Moreover, the strength of the Islamic regime is by no means permanent while the weakness of its opponents may be transient. For example, the union among the various rightist factions may not last in the face of systemic contradictions, and the subsidy-reduction program may begin to take its toll on the poor after the honeymoon period is over and increased household bills arrive. The US and its allies also plan to continue expanding their “crippling” sanctions until a satisfactory resolution is reached with Iran over its nuclear programs. Meanwhile, the anti-Iran forces in the West are trying their best to impose a war on Iran as is evidenced by the “documentary” called “Iranium” (Iran plus Uranium).

What happens next will depend on the Supreme Leader. He should not allow the ultra-right groups to destroy the faithful Greens, including their leaders. Instead, he should isolate the extremists on both sides, unite the realistic religious and secular Iranians, and call for national reconciliation. Forming a Constitutional review panel, securing free and fair elections, freeing the innocent political prisoners, and removing some of the social restrictions on women and the younger generations will be steps in the right direction. Some 32 years ago, the Iranian revolution set in motion a “wind of change” that has now engulfed the Arab World. The wind is now blowing back into Iran and should be welcomed.

Finally, the Supreme Leader should also consider reducing tension with the US over Iran’s nuclear program. It is unfortunate that some Western leaders are listening to pundits that have changed their mind on Iran from event to event. Fooled by the revolutions in the Arab World and street protests in Iran, many such “Iran experts” and their media backers are now urging for a more interventionist policy of “regime change” on behalf of the Green Movement. The Western “regime-changers” are as delusional as their Iranian expatriate and domestic allies. While all dictatorships are overthrown at some point, the authoritarian Islamic Republic is not a candidate for immediate collapse.

Even if the Islamic system was to fall down per the wishes of its enemies, the alternative may not be as hospitable as most predict. The likely scenario will ensue chaos, civil war and territorial disintegration, which will not serve the Iranian democrats and nationalists nor American interests in the region. The US already has too much on its shoulders to carry – from Afghanistan to Iraq, and now the changing Arab World. A political rupture in Iran will also jeopardize the prospect for democratic transformation in the region. It is time that the Iranian leaders and their enemies listen to voice of reason and mange the Iranian democratic transition and US-Iran relations peacefully and in the best interests of all involved.

AUTHOR
Dr. Hooshang Amirahmadi is a professor at Rutgers University and founder and president of the American Iranian Council. www.amirahmadi.com; hooshang@amirahmadi.com.