With Me or Against Me 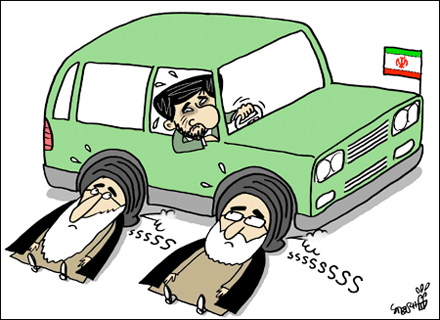 Speaking at the mausoleum of the founder of the Islamic Republic Ayatollah Khomeini last week, Iranian President Mahmoud Ahmadinejad was interrupted several times by chants against his closest aide and the man he’d like to succeed him, Esfandiar Rahim Mashaei.

It was déjà vu for the Iranian president, who had in the past waged similar attacks against his critics, haranguing them at public events. But now he, after a few months of bruising political battles that have damaged what remained of his credibility and popularity within Iran, had become the victim.

The incident gave the Iranian public yet another glimpse into a power struggle between Ahmadinejad and Supreme Leader Ayatollah Khamenei that has been unfolding over the past several months.

As a result of that battle, Ahmadinejad has found himself in a position familiar in Iran to other officials who have dared stand up against Khamenei.

He has come under attack from all sides, and his entourage — several of whom have been detained by police — is facing a long list of severe accusations, ranging from deviating from the principles of the Islamic Republic and promoting “Islam minus clergy” to sorcery and pushing for ties with Iran’s enemies, including the United States.

Ahmadinejad has angered Khamenei with his repeated attempts to gain more power within the Iranian political system and to act unilaterally. In response, Khamenei has launched a campaign to weaken the combative president.

Last Friday’s incident at Khomeini’s mausoleum was just another warning to Ahmadinejad to surrender to Khamenei’s will or face more attacks.

For now, Ahmadinejad doesn’t seem intimidated or ready to compromise with Khamenei, who as Supreme Leader has the last say in all state matters and is politically above the president, not his rival.

The power struggle between the two first heated up in April when Ahmadinejad dismissed Intelligence Minister Heydar Moslehi, apparently over his surveillance of presidential confidant and then-Chief of Staff Rahim Mashaei. It wasn’t the first time Ahmadinejad had acted without consulting the Iranian leader.

Khamenei, who has a long record of reacting poorly when challenged, and who would have reason to oppose Mashaei for his more moderate views, was quick to react. In a public letter, he reinstated Moslehi, a slap to Ahmadinejad.

Ahmadinejad accepted Moslehi back to his team only after publicly sulking and refusing to attend cabinet meetings for almost two weeks. It was when he finally came back to work that he began creating even more problems.

Ahmadinejad merged eight ministries into four, despite widespread opposition against the erratic, and declared himself in charge of the crucial Oil Ministry. This renewed a long-running fight between him and the Parliament, which said the move violated Iranian laws. One day after Parliament reported his “illegal action” to the Judiciary, Ahmadinejad appointed a caretaker.

Parliament’s vote to notify the Judiciary highlights how isolated Ahmadinejad has become: only one lawmaker opposed the bill. He’s lost political support elsewhere as well, including among some of his former loyalists. The most important of those is the ultra-hardline Ayatollah Mesbah Yazdi. In 2005, Mesbah Yazdi declared Ahmadinejad’s election a miracle and a gift from the Hidden Imam. Now, he calls Ahmadinejad’s entourage “garbage” and says publicly that the president has been bewitched.

Several commanders of the Iranian Revolutionary Guard Corps, which is through to have played a key role in Ahmadinejad’s disputed 2009 reelection, have also publicly denounced the president’s political clique while vowing allegiance to the supreme leader.

In one of the latest attacks, Khamenei’s deputy representative to the Revolutionary Guard, Mojtaba Zolnour, described Ahmadinejad’s inner circle as the gravest danger in the history of Shiite Islam and said that it would weaken the foundation of the Islamic Republic. Not long ago, publicly using such terms against Ahmadinejad, once Khamenei’s protégé, would have been unthinkable. But these days, they are considered normal rhetoric in Tehran.

“The head of the deviant current should be removed,” said Zolnour, adding that it would be the only way for the government to clean itself.

“The deviant current” is a term Iranian officials now use regularly to refer to Ahmadinejad’s inner circle and right hand man Mashaei.

Since 2009, Ahmadinejad has resisted calls to dismiss Mashaei, whose daughter is reportedly married to the president’s son.

He faces a difficult choice. So does Khamenei.

Khamenei could give the green light for the impeachment of the man he once trusted and supported, even more so than previous presidents. But the price of such move could be high: it could lead to a political vacuum and political instability at a time when the public dissatisfaction with the state of the economy and rising prices is palpable.

Alternatively, Khamenei could keep Ahmadinejad in power while trying to weaken his presidency, just as he did to his predecessor, Mohammad Khatami.

His efforts might not be all that successful, as Ahmadinejad could cause even more trouble if provoked and doesn’t seem ready to become a lame duck president.

Despite all the opposition he’s facing and the unprecedented attacks, Ahmadinejad has not shown any sign of surrender. Reports suggest Ahmadinejad is not compromising for two reasons: first, because he sincerely believes he has widespread popular support; and second, because he seems to genuinely think he is connected to the Hidden Imam through Mashaei. This strange belief could help explain the accusations of sorcery that he and his entourage are facing.

It’s not clear when and how the current row will end. But it will depend to a great extent on how much patience Khamenei still has left for Ahmadinejad, who has been described as the most divisive figure in the Islamic Republic.

This confrontation has shrunk the circle of those who are considered insiders in the Islamic establishment in Iran.

As one Tehran-based observer noted, Iran is now a country where most of the former officials are branded as members of “the sedition,” a term coined to describe the Green opposition movement, and current officials are said to be part of a “deviant current.”

Once again in Iran, if you are not with Khamenei, you’re against him.