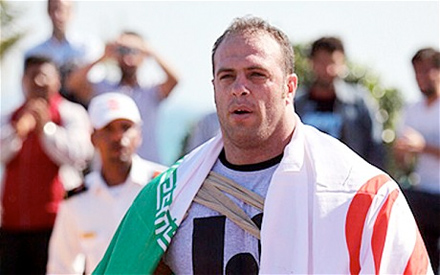 About a week ago, Iranian strongman, Rouhullah Dadashi who was an icon in Iranian bodybuilding and strongman competitions, was attacked and stabbed to death by three men in the city of Karaj. The news rippled through the country and left many in awe. To distract average Iranians from constant bad news about the economy and ongoing political wrangling, the Islamic Republic news media jump on the opportunity to turn the story into a national tragedy. The pretext was simple yet effective, “A national hero was taken away from the people.”

Prior to this event, most Iranians had no clue who Dadashi was, but the IRI media campaign drew a magnanimous picture by naming him “greatest athlete in Iranian modern history.” Some newspapers went so far as to call him the “people’s champion” and comparing him to Takhti. A few even called him a martyr. Dadashi was described as a gentle giant who in tradition of old Iranian pahlevans, cared for his people and took every opportunity to attend to those in need of help.

The intense publicity brought tens of thousands of Iranians out in the streets of Karaj to partake in his funeral.

In reality, Dadashi was nothing more than a steroid-infested thug who was a part of the government intimidation machine. During the uprising of 2009, while Iranian youth were beaten, killed, raped and tortured, Dadashi dedicated his strongman competition title to Ahmadinejad and called him the greatest Iranian alive. He was a basiji enforcer and received allowance from the government for personal training services he provided to Basij and Sepah. In a nutshell, Dadashi was Islamic Republic’s Shahban “Beemokh” Jafari.

On July 16, while accompanied by a newspaper reporter, Dadashi found himself involved in a road rage. As he drove his car through the packed streets, he kept arguing with three passengers in a car that came close to hitting him from the side. According to eyewitness accounts, the chase continued for more than 10 minutes. The other car eventually pulled over and all hell broke loose. It is not clear who started the fight but it is clear who ended it. The reporter who accompanied Dadashi said that it started with an argument and escalated to a fistfight. One of the three passengers of the other car, pulled a knife, stabbed Dadashi several times and slashed his neck. Ironically, Dadashi, the hooligan supremo, met hoods who were more ruthless than he was and he paid for it with dear life.

Dadashi by no indication is a victim. He most likely initiated the conflict. He perhaps thought that his badge of honor with Basij, his large frame and thuggish demeanor are enough to intimidate the three smaller men to submission. The presence of the reporter might have played a factor since a nice show of force would have really impressed the reporter and resulted in a more favorable story. However, this time, the three passengers happened to be better prepared than he was.

Intimidation plays a big factor in our culture. In times of national crisis, men with big physical appearances and hoodlum conducts have always played important roles in our political system. Iranian regimes in all forms and shapes have turned to this breed for survival. This subclass kills, pillages and rapes for a fistful of cash and a pat on the back. They are stupid, loyal and effective. However, they are not invincible.

The current Iranian political system relies heavily on these types of men. IRI is fully aware that for the most part, its internal enemies are easily intimidated and weak. The presence of these men in government sponsored religious ceremonies or pro-government demonstrations, send clear signals to ordinary Iranians. Many of these men work in Iranian justice system, prisons and intelligent services. They are directly connected to Basij and organize revolutionary guards’ drug smuggling and contraband operations.

The Iranian opposition must recognize the fact that having a few of “arazel and obash” on its side might not be a bad thing. Relying solely on geriatric intellectuals and fruity upper middle-class soosools won’t accomplish much. After all, dogs eat dogs and in our country, you ain’t getting far by stroking your pussycat.